My Strangest Experience: The Boy Outside the Tent


How do we decide which reader-submitted stories to include in our My Strangest Experience series? We like to use a little something we call the tingle test. That's when you read something so spooky that it makes all the tiny hairs on your arms and ears and neck tingle. This story, submitted by a woman from Tennesee named Judy Yannick, definitely passed the test!


During the summer of 1974 my family took its last summer vacation as a family. I had just turned nineteen and would be going away to the University of Tennessee in the fall. My younger brother Barry, who was a few months shy of his eighteenth birthday, had already committed himself to the navy and he, too, would be going away. As we had done every year since I was old enough to remember, we took our shiny Airstream camper to Lake Brownwood State Park in Texas. Located virtually near the state's geographical center, it was a convenient drive from our home in Winchell.

As usual, my parents, Flo and Louis Gotschall, got to sleep in the camper while me and Barry slept in our own tents just a stone's throw away from their front door.

Although Barry loved the water I had never learned to swim. I spent much of that week walking the shoreline of the enormous lake, collecting rocks and reading books. I recall that it was the morning of our second day at the park when I met a handsome boy of perhaps 20 or 21. He was tall and blonde, with a lean physique and golden tan skin. I met him by one of the boat docks and we talked for several minutes. Even though I had a boyfriend back home I admit that I enjoyed his flirtations and it appeared that he also enjoyed mine. He introduced himself as Jerry Vaughn Smith.

All afternoon we walked along the lake and talked. He wanted to know everything about me; my favorite sports teams, my favorite television programs and even my favorite color of ice cream. My boyfriend back home never showed half as much interest in the minor details of my life as Jerry, and I was eager to tell him everything. Oddly, whenever I attempted to question Jerry about his life he grew distant and aloof, answering my questions with shrugs and vague responses.

Even though he had a tendency to act strange, the rest of my family took a liking to him. The following afternoon he joined us for hot dogs and hamburgers, and even played horseshoes with me and my brother. My brother, of course, teased me relentlessly afterward, threatening to "spill the beans" to Lawrence, my boyfriend back home.

"Go ahead, I don't care," I would reply, insisting that me and Jerry were just friends and nothing more. Barry would just roll his eyes or make kissy faces.

The following morning I woke up and found Jerry standing outside my tent. Nobody else was awake-- the sun had just begun to rise, and I wondered just how long Jerry had been standing there. What did he want? What was he doing? It made me really uncomfortable and when I asked him about it he just smiled and asked me to go swimming with him. I was beginning to feel scared; I distinctly remember telling him, on several occasions as a matter of fact, that I did not swim and had no desire to learn. But he was persistent. He said he was tired of swimming alone.

"Go away, Jerry!" I finally said, retreating back into my tent. I went back to sleep, but it seemed like no sooner had I drifted off than I was awakened by the sound of something heavy striking my tent. I jumped out of my sleeping bag and went outside, expecting to find Jerry. But it was only my brother. He had thrown a football directly at my tent just to "wake me up".

Outside, my parents were cooking breakfast. My dad was warming up a can of baked beans over the fire while mom made scrambled eggs in her cast iron skillet. Barry was still throwing his football at the side of my tent, just to amuse himself I guess. "Where's your boyfriend?" he kept asking me all through breakfast. But something inside of me had changed since that morning. I no longer liked Jerry, and I hoped that I wouldn't have to see him during the rest of the vacation. I invented excuses in my head, thinking up ways to let him down gently should he show up at our campsite again, or if I ran into him on one of the boat docks.
But I never saw him again.

Years came and went and I had forgotten about Jerry. But in 2014 he came back to me when my family met at Mom's house over Thanksgiving. Dad had passed away five years earlier, so it was me and my husband Gary, mom, and Barry, who brought his wife and four children. After dinner we got to talking about old times and mom, like she did every year, brought out the old family photo album. The youngsters, of course, laughed at our clothes and outdated hairstyles. We went through a bunch of old snapshots of our many vacations at Lake Brownwood, and Barry, completely out of the blue asked, "Hey, whatever happened to Robert Redford?" It was an inside joke-- for weeks after that last family vacation my brother would tease me about Jerry, always choosing to refer to him as Robert Redford (even though I didn't think they looked very much alike).

I told Barry that I had no idea. After me and my husband returned home to Tennessee I got to thinking about the tall handsome boy I met by the boat docks back in 1974. Even though I hadn't thought about him in years, his name still came easily to mind. Jerry Vaughn Smith. It sounded like the name of a television actor or country singer and had a melodious ring to it, at least I thought, and I figured that was why I had never forgotten it.

Over the years I became somewhat obsessed with genealogy and one day I decided to satisfy my curiosity and attempt to find out whatever became of Jerry. I looked up old records and did online research, but couldn't find much. I even looked up all the high schools in the area and tried to figure out, from what little I remembered, what year he might've graduated. I searched on Facebook and tracked down some people who might have been classmates-- I deduced that he must've graduated from high school anywhere from one to five years before I did, but my search turned up nothing. 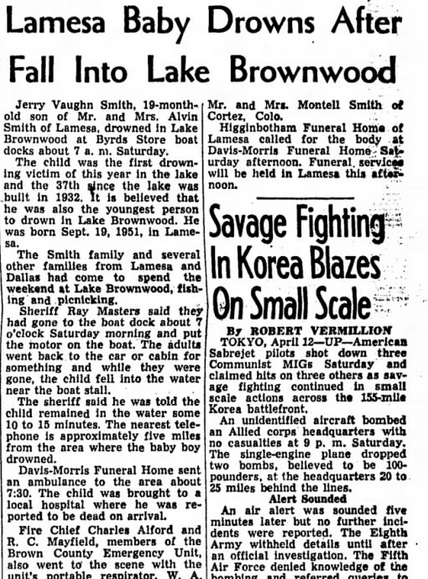 Sure I could be wrong. It could be just a strange coincidence. But if this boy hadn't drowned in 1953, he would've be around 22 years old during the time of our last family vacation. I thought about contacting relatives, but my husband advised against it. "They'd think you were crazy and would probably call the cops," he warned, and I think my husband is right. Besides, I'm not sure I want to learn anything else. The memories I have are enough!