The Mystery Letters of Camp Chase


During the Civil War more than 25,000 Confederate prisoners were held at Camp Chase in Columbus, Ohio. More than 2,200 of them are buried on the grounds of the former prison at the Camp Chase Cemetery. Of all the mysteries surrounding the Civil War, few are as interesting as the mystery letters of Camp Chase.

Written by prisoners over the Easter holiday in April of 1862, the mystery stems from the fact that 240 letters that were written that weekend were never delivered-- even though they were properly posted and marked with the "OK" stamp of the federal government.

To this day-- more than 154 years after they were written-- historians still have yet to find an explanation as to how or why the letters penned by Confederate prisoners never reached their intended destinations.
What is known is that letters written by prisoners had to be screened by federal war-time censorship officials, and the stamp which appears on all of the Camp Chase mystery letters indicates that this step was taken. Neither the Union army, not the U.S. Post Office (the precursor of the United States Postal Service) could provide a satisfactory explanation as to why these letters were never delivered.

The mystery letters were finally delivered, but not until 1929-- sixty-seven years after they had been written.

One can only imagine the strangeness of receiving a frayed, yellowed letter in the mail, written by someone who had passed away years, or even decades, earlier. Imagine going to your mailbox one day expecting to find only a bill or a piece of junk mail but, instead, finding a love letter written by a husband who had perished half a century earlier. Imagine reaching into your mailbox and finding a letter penned by a parent or grandparent who died before you were even born. When the U.S. Post Office delivered the mail in November of 1929, they weren't just delivering sheets of paper and envelopes-- they were delivering messages from ghosts.

Virtually all of the letters were written on Easter Sunday. For the most part they described the daily monotonies of life at the prison camp. One of the letters, written by a soldier named Reese Wood, begged his wife not to grieve over his imprisonment. "Do the best you can," he wrote. "You and the children must go ahead. I hope we may meet one time more in this life."

One of the mystery letters was delivered to Sue Keller of Harrodsburg, Kentucky. Keller later wrote: "I am so excited over the prospect of getting those letters that I cannot guide my pen, especially as one of them was written to my precious mother. I am now 77 years old, so was quite a little girl when my father was put in prison, but I can remember the anguish of my lovely mother." 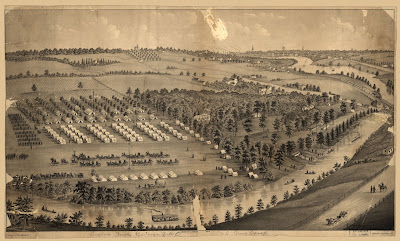 After the war, the mystery letters were stored at the State Library in Columbus. In 1929 the state legislature ordered the letters turned over to the Ohio Division of the Daughters of the Confederacy for the purpose of delivering them to the descendants of the authors who wrote them.

While the mystery letters of Camp Chase might not be as famous as the mystery of who killed Stonewall Jackson, or as dramatic as the disappearance of Flight 19 over the Bermuda Triangle during WW2, there is, nonetheless, something haunting about this wartime unsolved mystery.