An Ozark Ghost Story: The Connor's Bluff House of Horror 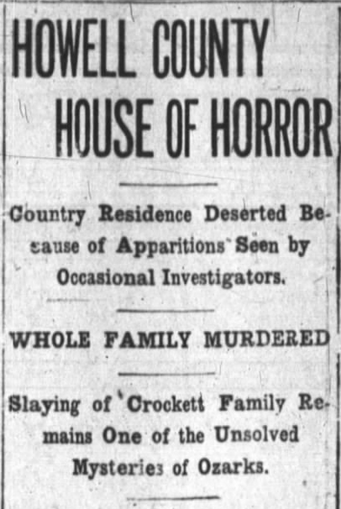 Strange things have happened in a home where an entire family was murdered-- very strange things. If this story is true, then the ghosts observed at the scene of the Crockett family's gruesome murder rank among the scariest we have ever heard about.


From the June 7, 1914 edition of Missouri's Springfield Republican:

Pomona, Mo., June 6.-- Nestling under the protecting arm of Connor's Bluff, one of the most rugged peaks of the Ozark Mountains, stands the "House of Horrors", the most talked of and feared spot in this section. Although the dwelling is one of the most beautiful in Howell County, and it situated on a fertile and lovely stretch of land, the house is and has been without an occupant for the past ten years. People shudder when they pass the "House of Horrors" and mothers living in the vicinity of the place hush the clamor of their little ones with stories of the haunted dwelling.

In 1816, the house was erected by Stephen Crockett, a wealthy planter. He and his beautiful wife occupied the residence for years and reared a large and interesting family.

On the night of February 25, 1900, an occasion never to be forgotten by the people of this county, Crockett and his wife and family were found dead in their beds. The throat of each had been severed with an axe which was found covered with blood in the snow in front of the house.

Although a posse of officers, headed by a pack of bloodhounds, scoured the section, no trace of the murderer was ever discovered and the mystery shrouding the tragedy has never been unravelled.

Three years after the fateful night, the house was sold to a farmer from Illinois, but the latter only resided in the place for one night. The shrieks of the murdered family could be heard at frequent intervals and a ghostlike form stalked about the house with a bloody axe in its hand and a demonical smile upon its face. The newcomer left in terror and since that time the "House of Horrors" has remained vacant.

On several occasions, parties have wended their way up the rugged hillside to the gloomy dwelling and have listened for the cries of the murdered family. And they have come down with pale faces and trembling forms, declaring that the ghost had appeared. Lights have been seen to dance about the interior of the house and on one occasion a form, with blood streaming from a jagged wound in the forehead, appeared at the door and beckoned to the terrified group of investigators.

So great is the superstition concerning the place that several families living near it have moved away and now there is no family residing within a radius of eight miles from the "House of Horrors".