JOTB Exclusive Report: The Politics of the Paranormal

on February 23, 2017
JOTB presents a groundbreaking study on political preferences and the supernatural 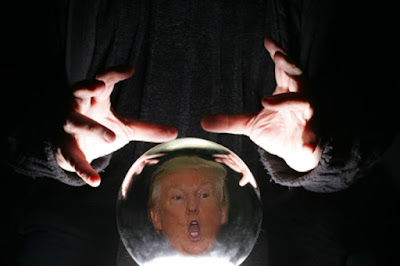 Journal of the Bizarre staffers had a busy 2016, attending paranormal conferences all over the United States and rubbing elbows with everyone from Bigfoot hunters to clairvoyants, with a heap of ufologists and conspiracy theorists thrown in for good measure. Our mission? To find out whether or not there is a link between one's political affiliation and their supernatural beliefs.

The seven-month-long study yielded some interesting findings. The JOTB "Politics of the Paranormal" survey-- which we believe to be the largest of its kind-- polled 1,756 ParaCon and UFO symposium attendees in cities throughout the United States, from Orlando to Milwaukee, who were asked whether they identified as either conservative, strongly conservative, liberal, strongly liberal or 'none of the above'. Our findings are below.

Among ParaCon attendees who listed Bigfoot, the Loch Ness Monster, Yeti, chupacabra or other cryptozoological entities as their primary area of interest (9.7 percent of all respondents), 48 percent leaned conservative, with more than 34 percent identifying themselves as strongly conservative. Only 27 percent identified themselves as holding liberal political points of view. 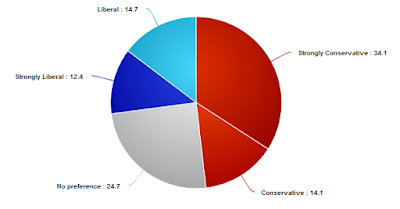 Analysis: Considering the number of alleged Bigfoot sightings in the Pacific Northwest, which tends to vote Democrat in national elections, it's somewhat surprising that the majority of Bigfoot aficionados identified themselves as strongly conservative. But I suppose if the opposite were true, they would probably call themselves "Bigfoot anthropologists" instead of Bigfoot hunters, right?

Witches, Psychics and Clairvoyants are almost all liberal

Of the ParaCon attendees who described their main interests as clairvoyancy, necromancy, witchcraft, palmistry and other related fields, roughly 80 percent identified themselves as holding left-leaning views on politics. Nearly 56 percent described themselves as being strongly liberal. Only two of the 262 respondents in this category-- less than one percent-- said they were strongly conservative. 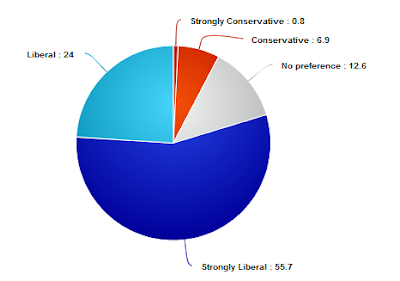 Analysis: These results aren't surprising, when you consider that the majority of people in this category are self-described "empaths", or people who are gifted with the ability to feel things beyond the range of the typical human being. When you think of empathy and feelings you think of liberals, who tend to base their decisions and political views on emotions rather than logic.


UFO aficionados are a mixed bag of nuts

Americans who have an interest in ufology adhere to any and all political viewpoints, with the majority professing to have no strong feelings either way. Most respondents, nearly 30 percent, expressed no political preference. Another 31 percent leaned conservative, and 39 percent leaned liberal, though less than 16 percent of respondents held strong feelings about it. 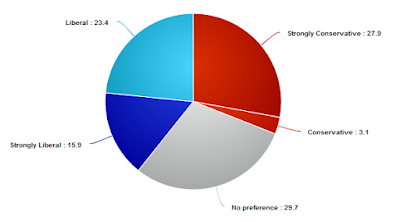 Analysis: It's important to differentiate between the two types of people who attend UFO conventions: believers and skeptics. Our sampling included both types of UFO enthusiasts and we believe this makes an interesting statement about the UFO community as a whole-- most people who follow or study UFOs are open-minded and flexible when it comes to their beliefs. We spoke to many individuals who started out as skeptics but later became believers, as well as former believers who, after years of self-study and independent research, arrived at the conclusion that UFOs either do not exist or have a logical explanation.


Conspiracy theorists are not as conservative as previously thought

Of all the people who attend paranormal conferences, the smallest sub-set (roughly 8 percent of all respondents) are those who say their primary field of interest is conspiracy theory. Not surprisingly, the Journal of the Bizarre survey finds that people who are into conspiracy theories tend to have strong political opinions, whether they lean left or right. In other words, there's not much middle ground; these folks are sold on their opinions and they expect you to be sold on their opinions, too.

However, liberals are more likely to believe in conspiracy theories by a margin of approximately eight points; slightly more than 49 percent of respondents identified themselves as strongly liberal or liberal, while just under 41 percent identify as being conservative or strongly conservative. 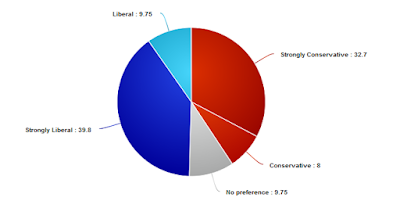 Analysis: This, to us, was the most surprising find to come out of the survey. For years, "conspiracy kooks" were commonly believed to lean right politically. Even today, many liberals cite conservative conspiracy king Alex Jones to be the undisputed leader of the tinfoil hat brigade. Yet, when you stop to think about the most popular conspiracies of our time, from the JFK assassination to the 9/11 conspiracy, these conspiracies were championed by liberals. After all, it was liberal filmmaker Oliver Stone who breathed new life into the Kennedy assassination, and it's difficult to believe that many conservatives buy into the claim that Bush masterminded the destruction of the World Trade Center. In fact, out of all the conspiracy theories cited by respondents, the alleged Sandy Hook conspiracy was the only conspiracy theory championed by predominantly conservative respondents.


Ghosts are loved by all

Respondents were asked whether their primary field of interest involved cryptozoology, UFOs, conspiracy theories or psychic phenomena. Naturally, since just about every person who attends a paranormal conference believes in ghosts, respondents weren't given the option to select ghosts as their first choice, as it would've greatly diminished the sample size of respondents in other categories. Since it was a foregone conclusion that virtually all ParaCon attendees are into the study of ghosts, respondents were simply asked to identify their political preference. 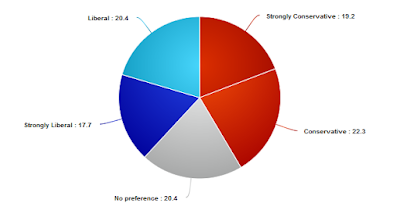 Analysis: We were slightly surprised by these results, because liberals are often stereotyped as being non-religious and religion plays a role in many superstitions involving ghosts. Our polling shows that people of all political preferences enjoy the paranormal just about the same, though the group least likely to express a belief in ghosts are those who identify themselves as being strongly liberal-- but only by a small margin.