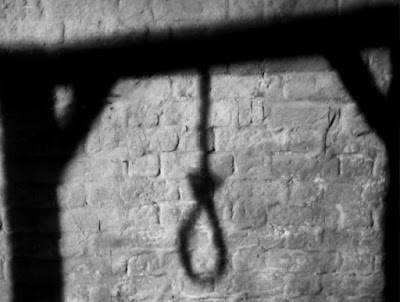 Today, hanging is universally condemned as a barbaric form of punishment. The very reason why the electric chair was invented was because the citizens of New York demanded a more humane form of capital punishment. Yet many people were sad to see the retirement of the hangman; some argued that quick and painless executions took away all of the terror associated with capital punishment, and criminals would have an easier time doing their jobs without thoughts of nooses and trap doors in the back of their minds.

The first man to be executed by hanging in England was Earl Ferrers, on May 5, 1760. These early English executions were crudely accomplished by standing a criminal in a cart with a noose around his neck. A signal was given, the horse was whipped, and the cart pulled away.

The art of hanging a criminal was perfected by the hangmen of Newgate Prison in London, and the mental image most of us have today about the hangman comes from the writings of Charles Dickens, who often wrote about Newgate in his novels and stories. The Newgate Calendar was also responsible for popularizing the job of the hangman. Originally published by the prison-keeper, The Newgate Calendar, subtitled The Malefactor's Bloody Register, was a monthly periodical during the 18th and 19th centuries describing the prison's executions. It was later published as a "penny dreadful". 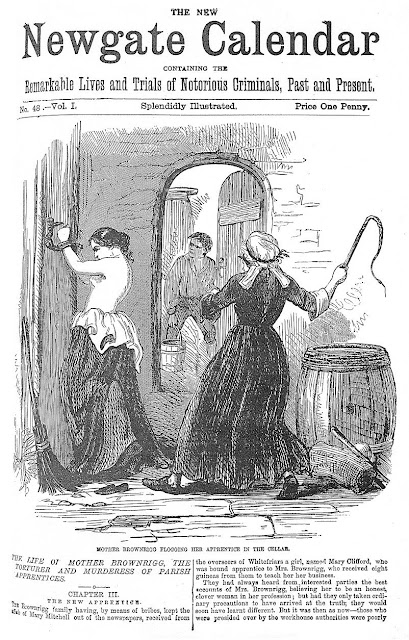 The Newgate Calendar describes a typical hanging as follows:

Condemned felons are executed in front of the prison on a large, movable scaffold, called the new drop, which is kept in the prison yard for this purpose. The malefactors stand on a false door and, when their devotions are finished, on a signal being given, the floor suddenly drops, leaving the victim suspended in the air.


Newgate's executions used to be public spectacles, but were eventually moved to inside the prison. On September 8, 1868, the first private execution occurred at Newgate, when Alexander McKay was hanged for the murder of a Mrs. Grossmith.

An experienced Newgate hangman once explained the theory of hanging to a London journalist:

"The theory of hanging is that the neck of the culprit should be broken. If this is done successfully the second cervical vertebra is dislocated. The odontoid process ruptures the transverse ligament of the atlas, or, the first bone of the neck, which sustains the globe of the neck and compresses the spinal cord against the posterior arch of the vertebrae. The cord is here just expanding into the medulla oblongata, wherein is situated the ganglion that presides over respiration. Its compression stops respiration at once, by stopping all desire for it, and death in such a case would be immediate and probably painless."

In other words, if you break a person's neck in just the right spot, the person will stop breathing instantly.
Obviously, Newgate executioners prided themselves on their skill and professionalism. The hangman continued explaining the fine art of hanging a prisoner:

"Frequently the second vertebra is only partially dislocated. Death then takes place from slow and painful suffocation, the victim getting just air enough through the half closed windpipe to prolong his struggles, or from apoplexy following the sudden cerebral congestion, which is caused both by the suffocation and by the pressure of the rope upon the great veins of the neck."

American hangmen never mastered their art the same way their English counterparts did. Hanging in the United States has always been fairly crude and primitive in comparison-- at least until Daniel Binkley came along.


The Haberdasher of the Gallows

Daniel F. Binkley of Kansas City, Missouri, became a hangman because he loved the work and had a deep appreciation for the art of execution. He knew he wanted to be an executioner ever since he was a boy, and the thought of broken ropes and slow strangulation were revolting to his artistic soul. He first hanged a man in 1873; by 1889 he had witnessed fifty-six executions, performing fourteen of them himself. It was said that Binkley was so skillful that he could tie a hemp rope into a noose faster than any other hangman in the country, with no more difficulty than a man tying a necktie. As a result of his proficiency, and partly because of his meticulously-groomed appearance, he was known as the "Haberdasher of the Gallows".

"People generally suppose I am cold blooded," Binkley once stated, "but it is a mistaken idea. A warmer hearted man than I am does not live, but I consider it an act of charity to put men who must be hanged out of the way neatly and with dispatch. Personally I am opposed to capital punishment... But if it must be done, it should be done artistically. 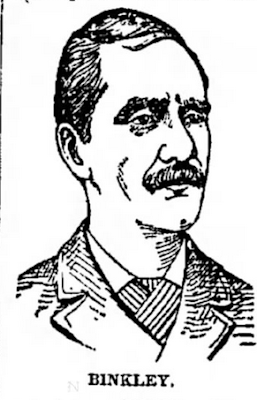 "When I go to hang a man I study his physique and past life. If he is a stout, athletic man with a strong neck I drop him seven or eight feet. If he has led a sedentary life, is thin-skinned and small of neck I make the drop shorter."

Like many skilled artisans, Binkley made it a point to observe others in his line of work. In 1889, Binkley spoke of the botched hanging of Pat Harnett, who was hanged in Columbus, Ohio. "My, what a botch that was!" Binkley declared. "Pat was a white skinned effeminate sort of fellow, but in spite of my pleadings the sheriff let him drop nine feet. The consequence was that his neck snapped like whipcord. The skin parted near the base of the neck and naturally contracted, leaving the flesh exposed well down on the shoulders. The rope tightening gathered the skin of the neck together like a tightly bound sack of grain. The headless trunk jumped and danced about exactly like a chicken with its head chopped off."

He also divulged some of his favorite techniques:

"I use hemp rope altogether. I have a silk rope, but do not use it. I only use three wraps in my knot. Most men use five, but I consider so many unnecessary and then they make a cumbersome looking bundle under a man's ear. With a good hempen rope and my three twists I will guarantee to break a man's neck every time."