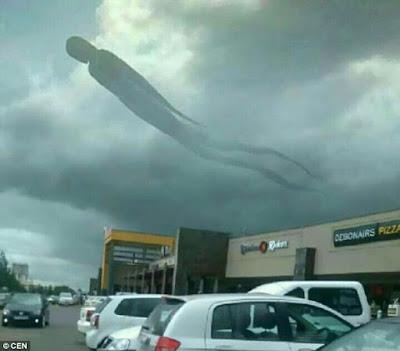 The crack staff of paranormal "experts" over at Coast to Coast AM are up to it again. Last week they posted grainy video footage of a "goblin" in Argentina that led us to conclude that it was the least spectacular monster ever caught on video, and now they're touting the alleged sighting of an anomalous figure over a mall in Zambia as being that of a "shadow person" (or perhaps a weird-looking cloud).

Shoppers at a mall in the African nation of Zambia were taken aback when they spotted a strange anomaly in the sky that bore a striking resemblance to a shadow person.

The eerie figure, which sports a distinct head and body along with wispy arms and legs, is believed to have measured more than 300 feet long, based on a comparison to the shops below it.

According to witnesses, the haunting sight lingered over the shopping center for about a half hour before disappearing.

Although the oddity was likely just a vivid cloud formation, some observers were not as easy to dismiss the event and purportedly began praying to the spirit.

Others opted for a different reaction and decided to flee the area out of fear that the 'figure' was an ominous sign.

Unfortunately, news of this "shadow person" appeared on countless websites over the weekend, from the UK's moderately credible Daily Mail to a slew of well-known paranormal websites. 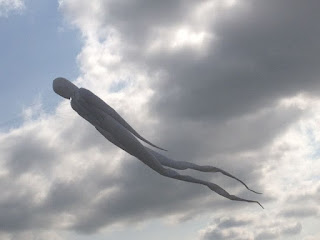 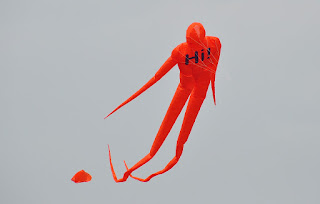 While many kitemakers sell this particular style of kite, one of the leading manufacturers is Martin Lester Kites, which provides the following product description:

Floating like a friendly ghost, the Spirit’s legs swim as if it’s propelling itself aloft. A soft kite with nothing to assemble or break, it stuffs into a 8" x 10" sack. Crafted of nylon sailcloth by Martin Lester himself this 20-ft long figure soars gracefully in surprisingly light winds. Great for night flying when its spookiness really comes alive. 2-ft. spinning drogue tail included. Wind range 4 to 24 mph. Use 100-lb. Dacron line. 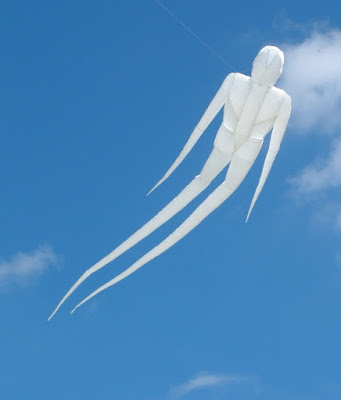 Even a person without any knowledge of kites should have been able to tell that this "shadow person" story was full of wind (pun intended). It's difficult to believe that an apparition appearing over a busy shopping center, making itself visible to numerous witnesses, was only captured by one unnamed witness. Nobody else had a phone handy? Nobody bothered to interview one of the many Zambian locals who (as the Daily Mail put it) "ran away in terror when they saw a strange human-like figure appear in the clouds"?

Unfortunately, the most amazing aspect of this story is just how gullible certain "paranormal researchers" are. We've seen this particular story peddled by several popular, well-known paranormal outlets that claim to be an authority on all things supernatural. We've said it before and we'll say it again-- you haven't earned the right to label yourself as a researcher until you do some actual, well, research.