on March 30, 2017
And journalists wonder why so many Americans have a negative opinion of journalists 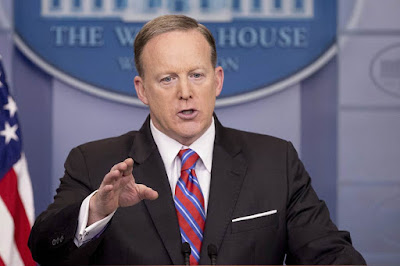 Historically, journalism has been a noble profession. Charles Bartlett earned his Pulitzer in 1956 for breaking a story that led to the humiliation and subsequent resignation of the Secretary of the Air Force. In 1960, Vance Trimble earned a Pulitzer for exposing nepotism in Congress. Six years later, Haynes Johnson earned the same award for his coverage of the civil rights conflict in Selma. In 1978, Gaylord Shaw exposed the unsafe conditions of our nation's dams and, in 1988, Tim Weiner earned the Pulitzer for exposing a secret Pentagon budget that led to an unprecedented arms buildup which threatened world peace.

No, I'm not making this up. This actually happened. A journalist was actually paid by a mainstream media outlet in real American dollars--  not Monopoly money, not in wampum beads, and not in scratch-off lottery tickets-- to fact-check Sean Spicer about comments he made about Russian salad dressing. Seriously. You can read the CNN article here.

"If the President puts Russian salad dressing on his salad tonight, somehow that's a Russia connection," said Spicer during his Tuesday press briefing, in an attempt to make light of the Russian hysteria that has mesmerized agenda-driven journalists like a gold pendulum dangled from the fingers of a carnival hypnotist.

And CNN couldn't wait to set Sean Spicer straight about the origins of Russian dressing and how it's not really Russian at all, but was, according to hard-hitting investigative journalist Michelle Krupa, invented by some guy in New Hampshire in 1924.

But Krupa knows that merely exposing the Trump administration's lack of knowledge regarding salad dressing history is not explosive enough to win a coveted prize for journalistic excellence, such as an Edward R. Murrow Award or Peabody Award.

No, Krupa knows she needs to dig a little deeper. She knows she has to peel away the layers of Sean Spicer's statements until she kinds the kernel of true ignorance at the center of his cold, dark, Kremlin-loving heart. And she finds it.

"Thing is, Russian dressing isn't Russian. (Also, it's really not for salads, but more of a sandwich spread -- usually a Reuben.)," writes CNN's Krupa.

Wow, now that's a game changer. Not only was Spicer attempting to decieve reporters about the origin of salad dressing, but, thing is, Russian dressing has no business being on a salad in the first place. Thing is, Sean Spicer-- and therefore the entire Trump administration-- is laughably ignorant about not just salads, but entire entrees as well! How can we accept such distorted "alternative facts" about food from an administration helmed by a guy who made part of his fortune by selling steaks?

The answer is, we can't. If Team Trump is incapable of telling the truth about salad dressing, what will they lie about next? Perhaps the next time Sean Spicer says he drank a Pepsi, some intrepid journalist like Michelle Krupa can swipe his glass for beverage residue, take it to a laboratory for independent analysis, and reveal to the world that he was really drinking R.C. Cola.

And if that should ever be the case, you can bet your bottom dollar that an outraged Maxine Waters will call for Trump's impeachment.