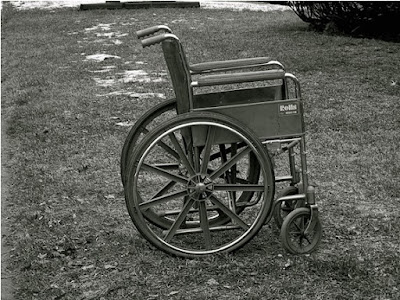 The following strange story was sent to us by Sunny from Oak Park, Illinois, and describes a peculiar incident that took place in a nursing home. Our research indicates that the facility is still in operation, so the name of the nursing home has been redacted.

About twenty years ago I worked one day per week as the staff beautician at a small nursing home in Cook County called ----------.  Every Friday I would go in at 9 o'clock and work until every resident who needed a haircut or a shampoo was finished. Sometimes I'd be done by 5, other times I'd be done by noon. It all depended on how many residents were living at ------------- at the time.

This particular incident took place on maybe my second or third week on the job, so it was before I came to know all of the nurses and residents by name. The beauty shop was located in a small room at the end of a hallway on the basement level, and outside the beauty shop the long hallway led to the kitchen. In the middle of the hallway was an elevator going up to the ground floor, where all the resident's rooms were located.
Whenever a resident needed a trim, one of the nurses would wheel him or her onto the elevator (nearly all of the residents were confined to wheelchairs, although a few of them used walkers) and then leave them outside the door to the beauty shop.

Since there was no place they could go, it was safe to leave them in the hallway for the short time it took to cut or wash their hair. The only place they could go was the beauty shop or the kitchen and the kitchen door, though never locked, was made of heavy steel. As for the elevator, all nursing home staff had to insert a key into a slot in order to operate it, and the key was hung on a peg that was too high up for any resident in a wheelchair to reach.

On this particular Friday I happened to arrive late due to a traffic accident on I-290, and when I got to ------------- there was already a line outside the beauty shop door. There were three women and two men, all in wheelchairs. The nurse who was waiting for me took off as soon as I got there without saying much, except that she'd be back in about 30 minutes to take whomever was finished back upstairs.

Now, you have to understand that these residents weren't in the best of health. Nearly all of them suffered from dementia, and conversation was virtually impossible. Most couldn't stand up on their own, so they remained in their wheelchairs while I put a cape around their necks and cut their hair. If they needed their hair washed, there was a plastic tray that fastened around their necks with a Velcro strap which allowed the water to run into the sink without soaking them. Fortunately, the nurses usually washed the residents' hair when they bathed them, so most of the time I didn't have to do it.

I began with Ida Mae, one of the female residents. After Ida Mae came Betty. I took her next because she came from the same wing, that way when the nurse came back she could take both residents up in the elevator at the same time. Since most of the residents were pretty incoherent most of the time, their names and room numbers were written in marker on a yellow plastic tag on the backs of their wheelchairs.

Because I arrived late it was a hectic morning. After the nurse came and took Ida Mae and Betty back to their rooms, I distinctly remember that there were three people left, one female and two males. I decided to take one of the men next. As I pushed his chair into the beauty shop I glanced down at the tag and say his name was Frank. I also glanced at the tags of the other two wheelchairs-- the woman's name was Irene, and the other male was named Phillip. He had a full head of white hair and black glasses. I don't remember anything else about the way he looked, I just happened to notice his hair because it was rather thick for a man of his age, which I guessed to be around 80 or so.

When I got done with Frank and wheeled him back into the hallway, I noticed that there was only one resident waiting, Irene. That's funny, I thought, because the elevator was ancient and made a rather loud noise whenever its doors opened, so surely I would have heard if a nurse had come and taken Phillip.

At any rate, I wheeled Irene into the beauty shop. I tried to ask her what happened to the old man in the wheelchair who was sitting next to her, but she didn't respond. As I was cutting her hair, the elevator opened and the nurse wheeled two more residents in need of a haircut into the hallway. She took off before I could ask her where Phillip had gone, but I made a mental note to ask her as soon as she returned.

I finished Irene, as well as the two remaining residents, before the nurse returned. She told me that there were no other residents who needed their hair done that day, and that I was free to take off. I asked her about Phillip but she looked confused. She then told me that there weren't any residents with that name. I told her she had to be mistaken and she said it was possible, since she had only worked at ------------ a few weeks longer than I had and didn't know all of the residents by name yet.

Since there wasn't enough room on the elevator for all of us I took the stairs, which required me to walk down the hall and go through the big metal door that led to the kitchen. Instead of going up the stairs I turned left and entered the kitchen. "By any chance did one of the residents come through her a little while ago?" I asked. One of the cooks said I was the first person to enter through that door all morning.

I walked upstairs and went to the nurse's station and asked if there was anyone on the floor named Phillip. One of the nurses looked at a list and told me there wasn't any resident by that name.

I soon forgot the matter. I had decided that in my haste I must've read the name wrong and one of the nurses, thinking that the old white-haired man with black glasses was done with his haircut, had taken him back to his room. Maybe I had my blowdryer going at the time and that's why I didn't hear the elevator. That was the only explanation that seemed rational.

Well, to make a long story short, I never saw that old man with the black glasses again, or saw any other resident who matched his description. I continued working at ------------ for over a year, so you would think that, at some point, "Phillip" would have needed a haircut. I never mentioned the incident to any of the staff members because I had already asked them once and didn't want to come across as a crazy person for asking again.

But every Friday, whenever I went to work at ------------- I kept my eyes open for him. Who was he? Where did he go? Did any of the other residents see him? It's been 20 years and the unanswered questions still keep me up at night.

The other obvious explanation would be that the man I saw was the ghost of former nursing home resident. However, inside the beauty shop there was a shelf of binders in which we recorded all of the services we performed on the residents, along with their name and date. I searched through all of them, going back for a number of years, and never came across any resident named Phillip.

Maybe he was a guardian angel?

Got a bizarre real-life story to share? Email it to us at annanewburg@yahoo.com
ghost stories guardian angels