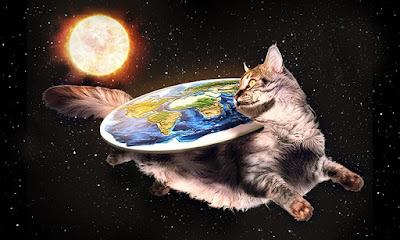 While going through my email today I found an email sent by a woman who pointed out that, out of all the topics we've covered on this site over the years, we have never written anything about the "flat earth" theory.

This caught my attention because I was pretty sure that we've discussed flat earth theory at some point in the past but, alas, we never have.

Here's the problem with the theory, which I have never heard addressed by flat earthers. Since mankind first began exploring the seas, why hasn't anyone like Magellan, Hudson, Vasco da Gama, Drake, DeSoto or Columbus ever reached the edge?

You'd think at some point in the history of exploration, somebody would've reached the end of the earth, and said, "Whoah! Turn this mofo around, we're about to go over the edge!"