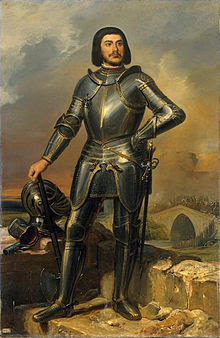 No conversation on the most evil men in history would be complete without mentioning Gilles de Rais, the French military hero turned occultist who, in order to quench his thirst for human blood, committed some of the most graphic and revolting crimes the world has ever seen.

Born in 1405 of noble blood, Gilles de Rais was a knight and lord from Brittany, and a descendent of the the wealthy and powerful House of Montmorency-Laval. As a young man he served with valor in the French army, eventually becoming a commander and fighting against the English alongside Joan of Arc. For his heroism in the Hundreds' Year War he was awarded the title of Marshal of France.

He soon retired to his sprawling country manor, but before long the locals became alarmed at the disappearance of children from the vicinity. Strangely, only children under the age of seven went missing. When it was learned that Gilles had adopted a fascination with the occult, parents who had lost their children staked out the Marshal's castle, watching the estate day and night for clues that might bring an end to the mysterious abductions.

In 1438 Gilles de Rais summoned a priest, Eustache Blanchet, and instructed him to find occult practitioners who could conjure demons and the dead. Before long he was practicing black magic at his castle in Tiffauges. He claimed to be attempting to contact a demon by the name of Barron so that he could sign a contract, in which he would turn over his riches for immortality.

Gilles eventually grew disheartened by his inability to conjure the demon. A close friend, a mystic and occult author named Francois Prelati, believed that the demon Barron was displeased with the Marshal, and suggested an offering of childrens body parts as a sacrifice.

Meanwhile, the neighbors finally worked up enough courage to formally accuse Gilles de Rais of being responsible for the abduction of children, and a warrant was sworn out for his arrest. Perhaps disappointed by his failure to communicate with demons, or perhaps frustrated by the depletion of his wealth in order to learn the secrets of France's most famous mystics and alchemists, the Marshal confessed-- and his confession was more shocking than anything the most distraught parent of a missing child could even imagine.

Gilles confessed that his first abductions took place in the spring of 1432, and his first victim was a young boy named Jeudon, whom the Marshal had hired as a messenger. After the boy failed to return home, it was assumed that he had been kidnapped by thieves on his way to Machecoul to deliver the Marshal's message.
He also confessed to murdering, sodomizing and drinking the blood of at least a hundred more and, during his trial, he described his methods.

Gilles won over the trust of the children by buying them expensive clothes and inviting them to a sumptuous feast in his castle. The children, mostly from impoverished households, rejoiced at the opportunity to eat exquisite foods they had never tasted before, in the caste of one of France's most decorated war heroes. Gilles plied the children with wine before leading them to an upper room in his castle, where he raped and then murdered them, before offering their severed limbs as a sacrifice to the demon Barron.

Gilles confessed that he would gently kiss the children after they were dead; the severed heads he found most attractive he would hold up and admire. He confessed to deriving immense pleasure from cutting open their torsos and examining their organs, sometimes while the victim was still alive.

According to the servant's testimony, the remnants of the victims were burned in a fireplace and their ashes scattered throughout the estate.

What we know about the life and crimes of Gilles de Rais comes from court documents, but, astonishingly, the judge was so sickened by the descriptions given by Gilles and his servants that he ordered the "worst" parts stricken from the transcripts. If the descriptions of the Marshal's acts that have been recorded are so revolting, it almost defies imagination to think about the parts that were too disturbing to be included in the official record.

In October of 1440, Poitou and another servant named Henriet were sentenced to death. Gille de Rais' sentence was handed down two days later.

At nine o'clock on the morning of October 26, the three condemned men were led to the gallows. Gilles requested to die first, and at eleven o'clock he was hanged. Poitou and Henriet were also hanged. After they were cut down, their bodies were burned in a bonfire and their ashes scattered. Gilles de Rais, however, was buried in the church of the monastery of Notre-Dame des Carmes in Nantes.

Even though Gilles confessed to the crimes, some believed that he was innocent, and that he was forced into a confession by the Catholic Church. One believer in this theory was Aleister Crowley, who rekindled modern interest in the case. Since then, historians, occultists, conspiracy theorists and members of secret societies have attempted to clear Gilles' name.

In 1992, French Freemasons held a mock re-trial, in which Gilles was found not guilty. Although the prosecution and defense consisted of former French members of parliament and respected lawyers, the verdict has no legal bearing on the official disposition of the case, and most historians still agree that Gilles de Rais, the Marshal of France, was guilty as charged.
France Gilles de Rais occult