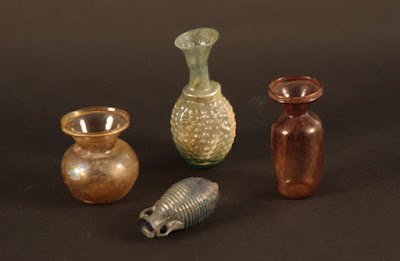 A few days ago Atlas Obscura published an article debunking Victorian era "tear catchers"-- glass bottles into which grieving persons wept. Being sentimental sometimes to the point of absurdity, those who lived during the 19th century had an obsession with grief; post-mortem photography, for example, was a popular way for people to preserve the memory of the dearly departed. Considering that thousands of Victorians had no qualms about displaying portraits of their deceased children in life-like poses in their homes, the concept of crying into a bottle doesn't seem so far-fetched.

As Atlas Obscura correctly pointed out, the antiques and curiosities marketplace is burgeoning with bottles hawked as authentic Victorian era tear catchers, and, in many cases, the romantic backstory is worth far more than the bottles themselves. In many cases, these bottles are really nothing more than perfume bottles.

As for the common belief that Victorians wept into them, Atlas Obscura claims that this is pure myth, rooted in ancient Greek and Roman "lachrymatories"-- a term bestowed by early scholars. The article quotes author and perfume expert Grace Elizabeth Arnone Hummel, who stated that scientists have performed tests on these ancient relics and found no evidence that Greek and Roman lachrymatories held tears.

Christian Harding, owner of The Belfry, an oddities and collectibles store in Seattle, told Atlas Obscura that customers come into his shop asking for Victorian era tear catchers all the time. "It’s a beautiful idea but no one really [cried into the bottles],” Harding stated. “Through the years, after reading many different articles and speaking with other collectors, I realized that the stories were, in fact, just myth."

First, let's set the record straight on the origin of lachrymatories.

Unfortunately, author Sonya Vatomsky-- who penned the Atlas Obscura article in question-- is incorrect in her assertion that lachrymatories originated with the Romans and Greeks.

The Old Testament mentions crying into bottles in Psalm 56, Verse 8: Thou tellest my wanderings; put thou tears into thy bottle. It was King David who composed the psalm sometime after he was seized by the Philistines in Gath, which most Biblical scholars place around 1,011 BC. The Roman republic was not founded until the 6th century BC, and Greek culture didn't begin until the 8th century BC.

In any case, David's verse about crying into bottles predates the Romans and Greeks by hundreds of years.
Of course, the term "lachrymatories" wasn't used by the Greeks, Romans or Jews, but was coined by the early historians and archaeologists who explored their ruins and excavated their cities. Archaeological excavation was pioneered by William Cunnington (1754-1810) and further refined during the Victorian era, when the first excavations of ancient Greece took place.

In fact, during the Victorian era, with all of the suffering caused by deadly epidemics and war, Psalm 56 was a popular choice for religious sermons. Presbyterian leader Thomas De Witt Talmage (1832-1902) was especially fond of giving his "Tears in a Bottle" sermon. In August of 1893, he expounded on the effectiveness of his famous lachrymatorial lecture, stating: "Hardly a mail has come to me for twenty years that has not contained letters saying that my sermons have comforted the writers of those letters. I have not this summer nor for twenty years spoken on the platform of any outdoor meeting but coming down I have been told by hundreds of people the same thing." [1]

Talmage had been traveling the country between 1873 and 1893 preaching his famous "Tears in a Bottle" sermon-- right smack dab in the heart of the Victorian era. This suggests that Victorians were at least well-acquainted with the concept of collecting tears.

Contemporaneous accounts do show that people did, in fact, save their pennies in order to buy "tear bottles", and that by 1883 it was a full-blown craze:

"But the very latest, up to the hour of going to press, is painted 'tear bottles'. For centuries there has been absolutely nothing to catch tears in when a girl desired to sit down and have a good cry. How on earth this has come to be overlooked is not simply astonishing; it is astounding."- Alabama Beacon, Feb. 16, 1883. [2]

An 1891 article written by a visitor to a New York novelty shop describes the modern tear bottles he encountered at one particular shop:

"Thus I came across recently exquisite, narrow-necked, full-bodied cut glass tear bottles... The idea is not less than two thousand years old. The tear bottles are fashioned after the pattern of the 'lachrymae', as they were called, many of which have been found comparatively recently in the ruins of Pompeii and Herculaneum and among the tombs of the Greeks and Romans. They are supposed to have contained the tears of the mournersm and as these little bottles have been found plentifully among the Egyptian sarcophagi, it may have given rise to the well-known expression "crocodile tears", used to denote affected woe. In these more modern days the imitation tear bottles of cut glass and porcelain which stand on the dressing tables of our belles hold something more reviving than tear drops, which helps to assuage the spirits of a disappointed beauty. One of these tiny bottles had around the neck in gold letters the legend 'Take a smile," the very antithesis of its former use, when the legend might appropriately have been, 'Drop a tear'." -The St. Joseph Herald, Jan. 7, 1892 [3]

"Among the quaint old shapes in porcelain that are being revived are the classic 'tear bottles', a narrow-necked, full-bodied shape, round at the bottom."-- Philadelphia Inquirer, July 16, 1891 [4]

"Tear bottles are being revived in modern wares and are again fashionable bric-a-brack."- Opelousas Courier, Nov. 19, 1892 [6]

This proves that tear bottles were sold in Victorian times, at least as reproductions of the relics found in ancient tombs. But did anyone ever actually use them to cry into?

"We wiped away the pretty drops from the long curled lashes, the dainty cheeks, the small, quivering chin, and we drew gay pictures of the baby going about with tear-bottles hung around her neck."- Bolivar Bulletin, June 15, 1882 [5]

"An Atchison girl has a tear bottle that she cries into. When it is full, she will send it to her lover as proof of her grief at his absence. It is hoped that it will not become a fad. Girls are too nice and pretty to spoil everything by going around crying into bottles."-- Phillipsburg Herald, Aug. 13, 1891 [7]

"Charley got to talking about his mother in such a feeling way, and all her kindnesses toward me, that in my efforts to make known my appreciation I accidentally upset the tear-bottle and the cork flew out."-- Chicago Tribune, April 17, 1880 [12]

The tear bottle fad became so widespread that the term was often used as a figure of speech, often in political discussions:

"The judge ought to leave us a lock of his hair and from the party he has abandoned receive full tear bottles."-- Walnut Valley Times, May 2, 1890 [8]

"Jno. Hoge can have the loan of the Hub's tear bottle for the asking, and those who have tears to shed may as well prepare to shed them now."-- The Kearny Daily Hub, April 11, 1892 [9]

"When the Democracy, under the saintly leadership of William F. Harrity and Richard Croker, charges the Republican party with unjustifiable election methods it is about time for the heathen gods to trot out their tear bottles and weep."-- Los Angeles Times, Oct. 8, 1892 [10]

"I enjoy keeping such an interrogation right before the eyes of all the dear tender-hearted men who talk and write like tear-bottles and eat pork like apostate Jews."-- Louisville Courier-Journal, Sept. 25, 1887 [11]

"The so-called people's party is done up in Kansas. Carry the news to Polk, to Livingston and other southern plotters that Calamity Jane is sick unto death and they may get their tear-bottles ready in preparation for the funeral."-- Walnut Valley Times, Nov. 5, 1891 [13]

So, yes, there were some Victorians who actually cried into their Victorian-era Greek and Roman reproduction tear bottles, but it was not, by any means, a common occurrence. After all, there are people in 2017 who, for some reason or another, collect their tears (and sometimes other human waste products) in jars and bottles-- this a common sign of mental illness. Furthermore, Victorians never used the term "tear catcher" in reference to these bottles.

While Atlas Obscura gets partial credit for exposing most sellers of "antique tear catchers" as frauds, the implication that Victorian-era tear bottles do not exist is completely erroneous.

Tear bottles, as the contemporaneous newspaper articles cited above conclusively and unequivocally confirm, were a fad that peaked sometime around 1883-1893. However, these glass and porcelain bottles played a greater role in home decor than they did in mourning.