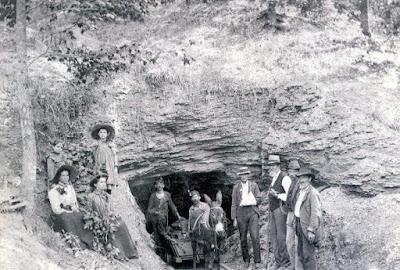 In early 1896 a bone-chilling discovery was made inside of an abandoned coal mine about a mile east of Colliers, West Virginia. A local adventure seeker, David Snyder, decided to explore the old mine, which hadn't been used since the days of the Civil War, and his gruesome find cleared up a mystery that had boggled the people of Brooke County for thirty-two years.

That was the last time anyone had seen Benjamin Ayers, John Ewing, Thomas Ackelson and Joseph Obney alive.


Snyder found the skeletons of the four missing men, who seemingly had fallen off the face of the earth after deserting the Union army. One of the skeletons was sitting upright against a rocky ledge, and next to the skeleton was a flask containing several well-preserved notes. And the contents of notes were every bit as disturbing as the moldering bones in the forsaken tunnels beneath Brooke County.

They read as follows:

November 2, 1863-- Should this ever reach the outside world let it be known that we are prisoners here owing to the caving in of the mine. We are deserters and were hiding here when the mine caved in. Food and water all gone. We are doomed, as no one outside is aware of our whereabouts. This is about the eighth day of imprisonment.

November 4-- John Ewing and Thomas Ackelson have just killed Benjamin Ayers and are eating him. I have already eaten my boot leg. The water in the mine is terrible. Our oil is getting scarce. Air becoming foul. I only know the day of the month by my watch.

November 6-- Ewing has just killed Ackelson. Cut off one of his feet and is eating it and dancing around and flourishing his dirk-knife like a maniac.

November 7- I am now alone with the dead. I had to kill Ewing in self defense. I have just eaten my other boot leg. Am sleepy. Good-bye. In enclose this note in this flask to preserve it if possible, so that if ever found our sad fate will be known.