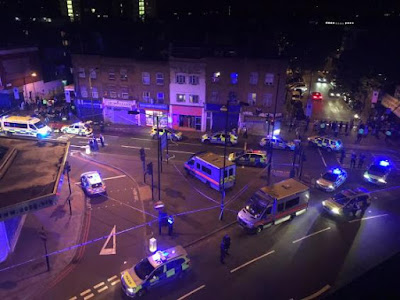 Another terrorist attack took place in London, this time targeting Muslims in Finsbury Park. Mainstream media outlets have reported that one man had died and 10 more were injured after 47-year-old Darren Osborne, a father of four from Cardiff, Wales, drove a white rented van onto the pavement, running over worshippers after late night Ramadan prayer at the Muslim Welfare House.

Not long after news of the story broke, many conspiracy theorists insisted that the Finsbury Park attack was a hoax, an operation staged to flip the narrative and draw attention away from the fact that radical Islamists have killed 1,263 victims in the past 23 in dozens of attacks across the world.

One website, 21stcenturywire.com, pointed out several discrepancies in witness accounts and the official narrative put forth by the UK government. For instance, Prime Minister May, on Monday afternoon, stated that “The early assessment with the police is that the attacker acted alone.” However, four different eyewitnesses interviewed by British news networks in the moments after the alleged attack have told different stories. One witness told Sky News that there were three men in the rented van, not one. A witness interviewed by the BBC gave virtually the same description-- that 3 men were involved in the attack, two of whom fled the scene on foot, and the third (Osborne) was arrested after being surrounded and subdued by Muslims at the scene.

Adil Rana, 24 years old, was also interviewed by Sky News at the scene and stated that there were three men in the van, and that two of them escaped on foot.

While eyewitness accounts seem to contradict the official narrative put forth by the police and the British government, an even more revealing statement was provided by a witness who claimed that-- just minutes before the attack-- police in Finsbury Park had began clearing the streets and cordoning off the location.

London Finsbury Park alleged van attack, I live 20 meters away from this event, it was clearly a hoax, live drill. For 20 minutes Police cars rushed around like headless chickens going nowhere fast, back & forth up the same streets, even against traffic on a one way main road. They were clearing the staging area out of public on the street next to me. Then a Police helicopter showed up, Police tapping [sic] off everywhere including the street I live on. Later on an ambulance showed up and parked right next to it after which 4 or 5 Muslim men showed up, two of which entered the second ambulance. One of these two men who entered unhurt came out on a wheel chair, then was placed on a stretcher from the other ambulance. Whilst this went on, two Police men were holding clipboards and one Medic was too, all just watching the other medic tuck this man in with straps. Then he was placed into the other ambulance. Both waited around 20 minutes before the first drove off, then the remaining Ambulance with alleged victim waited again for 20 minutes before it also drove away with no siren or lights. Armed Police outside of my house also later on. I filmed all of this and will hand it over to one of the channels. All around where I live is closed off, total fear & control propaganda happening on my doorstep! It just keeps on coming!

But didn't the Prime Minister applaud the police for arriving on the scene within one minute?

Of course, this can all be chalked up to confusion and excitement in the aftermath of a terror attack that happened in the dark 20 minutes past midnight.

Yet there are many details about the mainstream media's version of the facts that just seem to set off your bullshit detector.

For instance, Daily Mail reported on Monday that Osborne made the decision to "mow down" Muslims after getting drunk in a bar, using a van rented from Pontyclun Van Hire in South Wales. Presumably, Pontyclun Van Hire wouldn't turn over the keys to one of its vehicles to an intoxicated driver so we'll assume the van was rented before the driver became schnockered; however, the Daily Mail article does point out that the rental company does require a driver's license, a credit card and a recent utility bill with an address that matches the one on the driver's license before Pontyclun Van Hire will turn over the keys. This raises a few questions, since the same Daily Mail article also claims that Osborne, who was born in Singapore in 1969, has been estranged from his partner and children for six months. This, of course, begs the question: If Osborne left home six months ago, what are the odds that he has a recent utility bill with an address that matches the one on his driver's license?

But it gets fishier. Daily Mail presents conflicting details about Osborne's family life. While Daily Mail claims he had his partner had been estranged for six months, the same article also states:

Today, police were seen standing guard outside a house in Glyn Rhosyn, Pentwyn, where Osborne is believed to have lived with his partner.

"The police have been back and forth here all day. It's a terrible shock,' she said. 'I've seen him walking in the street but never spoken to him. He seemed normal enough. He has lived here a couple of years and kept himself to himself."

Yet, in the same article, Daily Mail states:

Neighbours today said Osborne is a 'devoted father' who was last seen collecting his children from his former partner's and taking them to school on Friday.


So which is it? Did Osborne live in the same house as his partner or didn't he?

And then there's the cryptic remark made by Osborne as he jumped out of the van. "I did my bit," the attacker declared. This can be interpreted any number of ways. It could be the declaration of a man who wanted to wage a one-man war against the Muslim community, or it could also be the declaration of a man who was hired, contracted or coerced into pulling off an attack against his will.