Kinshiu Maru: The Suicide Ship of the Russo-Japanese War 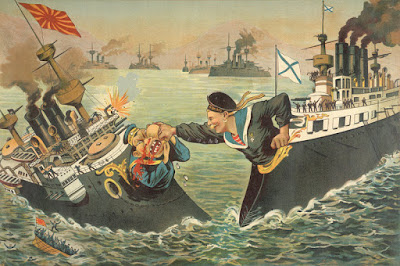 On October 12, 1904, a bone-chilling story was reported by the crew of the schooner Gotoma after its arrival in San Francisco from the Kuril Islands. According to the ship's captain, Captain Macomber, the schooner was about forty miles southwest of Cape Curat on August 4 when the crew sighted a mass of floating wreckage.

Captain Macomber sailed his ship closer to the wreckage and recognized it as a Japanese troopship-- the ill-fated Kinshiu Maru, which was reported sunk by the Russians the previous April. The crew boarded the floating wreck and discovered, to their horror, a number of headless Japanese soldiers ensnared in the wreckage. How those unfortunate soldiers became decapitated was a naval mystery that captivated the world for several weeks.

Strangely, it was an unknown preacher from Novia Scotia who managed to solve the mystery.

Reverend William Rufus Foote was a Canadian living in Japan during the Russo-Japanese War, which was fought between 1904 and 1905. Rev. Foote learned of the sinking of the troopship while living in Wonsan-- about 16 miles from the place where the 3,596-ton ship was attacked-- and sent a letter home to Canada describing what he had learned about the Kinshiu Maru from Japanese naval officers.

According to Foote, as the Russian squadron steamed north to Vladivostok it passed between Japanese battleships, cruisers and a torpedo flotilla, and in doing so encountered a Japanese troopship with about three hundred on board. The troopship was transporting the Japanese 37th Infantry to an area north of Wonsan.

"Some went down with the ship, some were taken by the Russians, others swam ashore, some of them saving even their rifles," wrote Foote.

The captain of the Kinshiu Maru, Captain Yagi, accompanied by an interpreter, boarded a small launch and the men made their way to the Russian cruiser to negotiate terms of surrender. About an hour later a Russian boarding party was dispatched to the Japanese troopship to confirm that it had been abandoned. To their surprise, the Russians discovered around 136 Japanese soldiers on board who had refused to abandon ship or surrender.

These soldiers had been part of a unit which had earned disgrace for showing cowardice in an earlier battle. They vowed to fight to the bitter end. The frustrated Russians returned to their ship. At around 1:30 a.m., the Russians decided that they were tired of playing games, and a torpedo was fired into the troopship.

Incredibly outnumbered and outarmed, the Japanese soldiers returned fire with pistols and revolvers, to little effect. The Russians fired a second torpedo, hitting the engine room and splitting the Kinshiu Maru in two.

Knowing that the battle was lost, the Japanese soldier in command of the troops grabbed a bayonet and disemboweled himself in front of the soldiers of the 37th Infantry. The other officers followed suit, while the infantrymen decapitated each other. Of the 300 or so Japanese soldiers and sailors aboard the Kinshiu Maru, only 46 made it to lifeboats. Of these, six took their own lives before making it back to the Japanese mainland.