The Ghost Cities of China 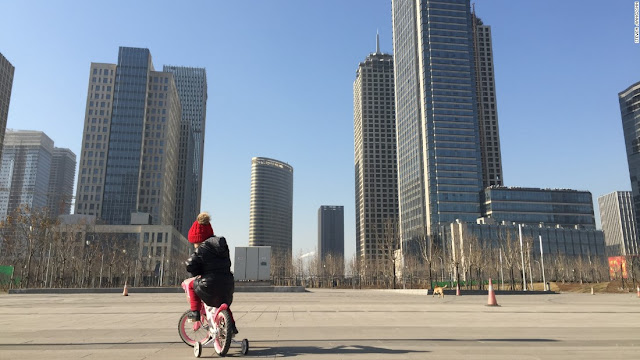 When Americans think of ghost towns, we invariably think of abandoned mining camps and Wild West tourist traps, complete with restored brothels and saloons. Unlike American ghost towns, the ghost towns (or ghost metropolises, to be more precise) of China often have less to do with the past than they do the future. These pre-fab cities boast towering skyscrapers where no one works, sprawling apartment complexes where no one lives, vast shopping malls where no one shops and miles of highways that are completely devoid of traffic.

At first glance, these eerily abandoned cities conjure thoughts of apocalypse or some Biblical rapture that whisked away millions of inhabitants without a trace. Or they bring to mind places like Theresienstadt, the Nazi concentration camp where the horrors of Jewish internment were disguised behind fake shops and cafés built to fool foreign Red Cross inspectors.

In reality, the numerous ghost cities of China have nothing to do with government propaganda or a nightmarish cataclysm; these ghost cities were built with the future in mind, as China grapples with a burgeoning working class and diminishing natural resources.

The subdivision of Kangbashi in Inner Mongolia's Ordos City, for instance, was built practically overnight with the profits of coal mining operations which have transformed Ordos into the second-wealthiest city in all of China. But while mining boom has brought great wealth to Ordos, the ever-expanding Ordos Desert has also left Ordos City bone dry. So what did the city officials decide to do? They built a brand new $161 billion city by the name of Kangbashi about fifteen miles away, where several reservoirs can supply water to the hundreds of thousands of citizens the city one day hopes to have.

In 2003, government officials from Ordos began construction on the new subdivision, designed to support of a population of one million. By 2010, around 25,000 Mongolians had moved to Kangbashi, but even today much of the city remains vacant. Nonetheless, all of the accoutrements and accommodations of any large urban area can be found in the ghost city-- a five-story shopping mall, stadiums and arenas, and even a campus of Beijing University.

Another ghost city of China is Yujiapu, which is a magnificent conglomeration of empty skyscrapers built in the hopes of turning the planned metropolis into a center of global finance.

Yujiapu, located on the banks of the commercially important Hai River, was developed with an initial investment of 200 billion yuan and still continues to be built to this day, though economic setbacks have delayed construction in recent years. Yujiapu was expected to be open for business in 2014.

Yujiapu hopes to attract citizens and investors alike by being one of the greenest cities in the world; as an APEC "low-carbon model town" (LCMT), Yujiapu is more like a Potemkin village than an actual city, at least for now. Several magnificent, yet unoccupied, buildings tower over the landscape-- the Shangbang Tower, Yujiapu Twin Tower I and II, and the Shenglong International Finance Center.

Another example of a Chinese overnight city is Meixi, which lines the shores of the man-made Meixi Lake in the Hunan province. When complete, Meixi Lake will encompass 6.5 million square meters, making it one of the most ambitious boom towns the world has ever seen.

Construction began in 2012 and, according to the Chinese government, the city will eventually house 180,000 people. Like Yujiapu, Meixi is designed to be ecologically friendly, with numerous greenspaces dividing planned residential communities, each designed to house approximately 10,000 residents.


When it comes to Chinese ghost cities, however, the grand-daddy of them all is Nanhui New City, a scratch-built megalopolis near Shanghai that looks like Hong Kong after a zombie apocalypse. 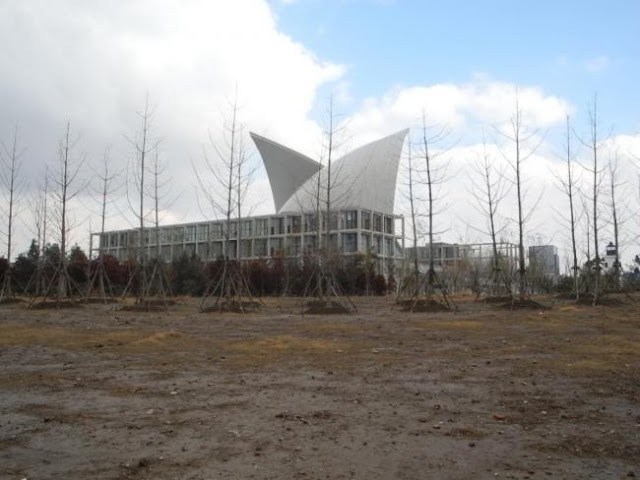 Over $7 billion has been spent since construction began in 2003. When complete, the city hopes to boast a population of 800,000.