Human Mummy Confection: Debunking the Myth of the Mellified Man 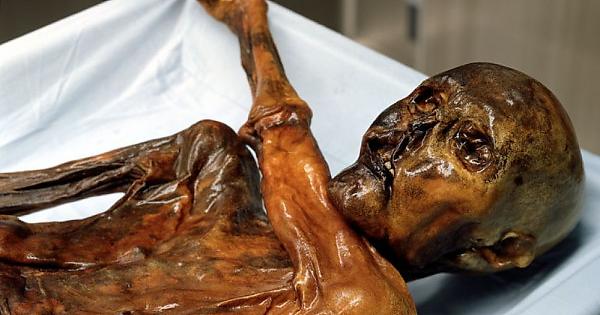 Few mythical medical substances are as shrouded in mystery as mellified man, also known as human mummy confection. According to legend, elderly males from Arabia would ingest nothing but copious amounts of honey until they began sweating and defecating the sugary substance. They would even bathe in honey (which gives an entirely new meaning to "golden showers").
After death, the bodies of these men would be placed in a honey-filled stone vault until the mummification process was complete.

This is just half the story, of course. After a century or more marinading in honey, the body would transform into a candy with miraculous healing powers. It has been written that munching on this human candy had the ability to immediately restore broken and deformed limbs.

While the legend of the mellified man has become a fixture of Arabian lore, it was the Chinese who first wrote of human mummy confection. The oldest mention of mellified man comes from Li Shizhen's 1596 materia medica work, Bencao Gangmu.

According to the Bencao Gangmu, Li Shizhen learned of mellified man not from the Arabians, but from another Chinese scholar, Tao Jiucheng, who lived more than two hundred years earlier. Li Shizhen wrote:

According to [Tao Jiucheng] in his [Chuogenglu], in the lands of the Arabs there are men 70 or 80 years old who are willing to give their bodies to save others. Such a one takes no more food or drink, only bathing and eating a little honey, till after a month his excreta are nothing but honey; then death ensues. His compatriots place the body to macerate in a stone coffin full of honey, with an inscription giving the year and month of burial. After a hundred years the seals are removed and the confection so formed used for the treatment of wounds and fractures of the body and limbs—only a small amount taken internally is needed for cure. Although it is scarce in those parts the common people call it "mellified man" or, in their foreign speech, "mu-nai-i". Thus Mr. [Tao], but I myself do not know whether the tale is true or not. In any case I append it for the consideration of the learned.

The legend of human mummy confection seems credible because both honey and mummies have been used for medicinal purposes throughout history. Honey has been prized as medicine by the Egyptians for nearly 3,000 years, while Egyptian mummies have been used by the Western world to manufacture everything from snakeoil cure-alls to "mummy brown" paint.

But there are a few holes in the mellified man legend that seem to suggest that the great Chinese naturalist Li Shizhen might have been mistaken about the Arabian origins of the legend.

Li Shizhen was undoubtedly earnest in his work, but the thing to keep in mind is that the Chinese language differed drastically from the time of Tao Jiucheng in the mid-14th century Yuan dynasty to the writing of Bencao Gangmu in 1596. Scholars believe that the very first mention of mellified man, by Tao Jiucheng, comes from 1366. This would have coincided with the Yuan Dynasty, when China was ruled and governed by the Mongols. In 1368, a peasant revolutionary named Zhu Yuanzhang finally overthrew the Mongols, thereby establishing the Ming Dynasty, which lasted until 1644.

In other words, Li Shizhen based his Ming Dynasty writing on earlier records from the Yuan Dynasty.
This is troublesome, because the Chinese spoken language difference greatly from the Chinese written language. Not only did both written and spoken languages encompass dozens of regional and provincial dialects, but even within each written and spoken dialect existed different varieties. For instance, the language taught to peasants was completely different than the language taught to government and military officials and other members of China's "elite".

Li Shizhen, the naturopath, belonged to the ethnic group known as the Hans and lived in Qichun County in central China, whereas Tao Jiucheng (also known as Tao Zongyi) lived two centuries earlier in Huangyan, a city situated along the coast at the eastern edge of the Zhejiang province. To put this into perspective, it would be like a modern-day Navajo from Arizona translating the language of the 18th century Passamaquoddy from Maine. To one, a horse is called ahahs, while the other knows it as lhi-ta-a-ta.

Or, if you prefer, it would be like a student in 2017 reading the Declaration of Independence and trying to make sense out of it (Pursuit of happinefs? What the pfuck is happinefs?).

The second clue that seems to disprove the legend the Arabian mellified man is the homeopathic nature of the supposed healing properties of human mummy confection. In homeopathy, the pseudoscientific system of medicine in which "like cures like", a substance that causes the symptoms of a disease in healthy people would cure similar symptoms in sick people. Or, as Paracelsus declared in the 16th century, "what makes a man ill also cures him". Homeopaths call this the "Law of Similars".

While the healers of ancient Greece, Rome, and, to some extent, China and India, developed systems of medicine that would pave the way for the establishment of homeopathy by Samuel Hahnemann in Germany during the late 18th century, the historical record fails to turn up any healing practices among the ancient Arabians which correspond with the concept of similia similibus curantur, or "like cures like".

Instead, the peoples of ancient Arabia would have followed the tradition of Islamic (or Arabic) medicine. During the post-classical era (the era sandwiched between ancient history and modern history), Islamic medicine was considered to be the most advanced in the world. In fact, out of all the ancient healing systems ever devised, from the herbalism of China to the Ayurvedic traditions of India, it is the Arabic medical tradition that most closely resembles modern Western medicine.

It was the medical men of Islam who spurred the development of modern surgery. Though the success rate was low, surgical procedures were being performed in the hospitals of ancient Islamic society centuries before Li Shizhen wrote of mellified men. The ancient Islamic doctors mastered everything from cauterization to cataract surgery. They even knew about antisepsis; they washed the bodies of their patients with salt water and vinegar to ward off post-surgical infection.

Western medicine didn't reach this stage until Joseph Lister came along in 1867 (Semmelweis, of course, reached the same conclusion twenty years earlier but was mocked, ridiculed and blackballed until he went insane and took his own life by slashing his hand and thrusting it into the innards of a putrefied cadaver in order to intentionally contract gangrene and prove, once and for all, that germs cause disease).

Considering the advanced stage of Islamic medicine at the time, it seems highly unlikely that Arabs were munching on bits of human baklava in order to heal their broken arms.

That being said, however, embalming human remains with honey wasn't strange in some cultures. Exacavations of a Bronze Age grave site, called Ananauri 3, in the former Soviet republic of Georgia in 2012 uncoverered several 3,000-year-old mummies preserved with honey. Herodotus believed that the ancient Assyrians invented the practice (though no archaeological evidence has been found to support this theory), and even Alexander the Great, upon his death in 323 B.C., was preserved in a golden sarcophagus filled with honey.

In all likelihood, the Chinese herbalist Li Shizhen got his geography mixed up. Although he believed that the "mellified man" originated in Arabia, he was probably referring to Burma, where there was an ancient custom of preserving dead Buddhist monks in honey. Considering the underlying motif of self-sacrifice, it seems more likely that an elderly man consuming honey until it came out of his rear end in order to someday ease the suffering of his fellow man originated not with the Muslims, but with the Buddhists.