The Legend of Dead Man's Shadow


Langsville, in south central Ohio, is a quiet, lonesome place with a spooky legend-- the legend of "Dead Man's Shadow".

According to this legend, which dates back to the early 1920s, the body of a man who was struck and killed by a speeding automobile was laid onto the sidewalk until help arrived. But help came a little to late for the dying man, who left behind his shadow as an eternal, ghastly reminder of his tragic fate.

Many cities and towns across America have similar legends but, according to our research, this is the earliest example of a "dead man's shadow" legend. The following excerpt comes from the September 12, 1935 edition of the Times-Independent of Moab, Utah. 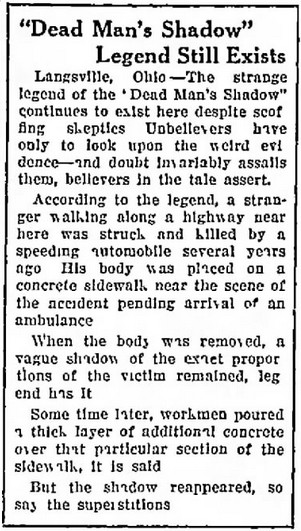