The Tragic Death of a Vaudeville Midget 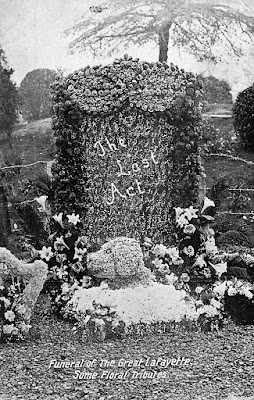 May 9, 1911, is a date that has gone down in infamy in the storied and colorful history of vaudeville. It was on this date Edinburgh's Empire Palace Theatre was ravaged by a fire that began on stage during the finale of a variety show, killing several performers. Among the dead were the famed magician, "The Great Lafayette", and a half dozen members of his troupe, including Alice Dale and Joe Coates-- two midget performers.

The fire started in the jumbled mass of stage scenery used in the finale of Lafayette's performance (according to one account, the famed magician traveled with 22 tons of props, costumes and scenery). It was a spectacular display of military pageantry, with the magician dressed up as the great British hero Field Marshal Frederick Sleigh Roberts on horseback. While nobody knows what started the fire (some historians believe it was a Chinese lantern on the stage, while one witness claimed that it was an oil lamp suspended from the ceiling), the survivors agree that it spread in a flash; within seconds the stage was engulfed in flames and the entire theatre choked with smoke. The iron fire curtain was frantically lowered, dividing the stage from the audience. Everyone in the crowd escaped without injury.

During the panic, a trained lion belonging to Lafayette escaped from its handler, blocking the stage door. Lafayette, after a valiant struggle, managed to move the lion out of the way, thereby saving the lives of many performers.

Others, sadly, were not as fortunate and even the great German-born magician himself ultimately perished in the tragedy. According to reports, Lafayette died after re-entering the burning building in order to rescue his dog and horse. In all, ten performers lost their lives.

The eccentric Lafayette, whose real name was Sigmund Neuberger, suffered his own strange post-mortem fate.

In the morning, after the flames died away, firemen discovered the charred remains of a man dressed in a military costume, lying next to a dead horse and a lion. Assuming the victim was Lafayette, he was taken away to Glasgow for cremation. The following day, the magician's manager became worried-- the corpse pulled from the ashes was not wearing any jewelry, and the eccentric Lafayette always wore several large, gaudy rings on his fingers. The mystery was cleared up later, when another body was found in the rubble-- this one wearing rings. It had been the magician's body double, a man identified only as "Richards" who had been mistakenly cremated. 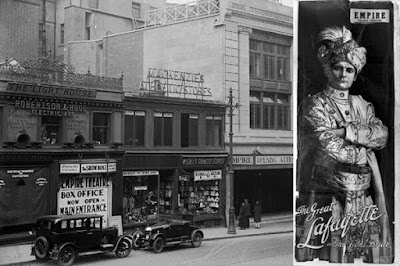 It was the two teenage midgets, Dale and Coates, who ran backstage to warn members of the band that the stage was on fire. During Lafayette's lavish finale, the two midgets were dressed in teddy bear costumes, and this was how they were dressed when they dashed backstage to issue the warning.

By this time, firemen were just arriving on the scene. Backstage, Alice Dale ran into the arms of James Baines, a cellist in Fayette's orchestra, but it was too late; the flames were spreading too fast, and the body of the young performer-- just seventeen at the time-- was found in the musician's arms. They had both succumbed to smoke inhalation.

But the fate of Joe Coates, a 14-year-old Londoner who had joined Fayette's troupe only two weeks earlier, is even sadder.

The young midget's fate is described briefly in vaudeville historian Joe Laurie, Jr.'s 1953 book, "Vaudeville: From the Honky-Tonks to the Palace":

The theatre caught fire and Joe Coates (a midget), whom he used in the show dressed as a teddy bear, and two other assistants were burned to death. The firemen, thinking Coates was a real teddy bear, didn't bother saving him as they wanted to save humans first.

The deaths of Alice Dale and Joe Coates serve as a footnote in most biographies of Sigmund "The Great Lafayette" Neuberger, whose legacy is still remembered and celebrated to this day. In 2011-- to mark the 100th anniversary of the fire-- a seance was held by The Edinburgh Secret Society at the Edinburgh Festival Theatre, which stands on the site of the Empire Palace. Lafayette, as it turned out, failed to make his presence known.