Arthur Everton: The man who could kill with hypnosis 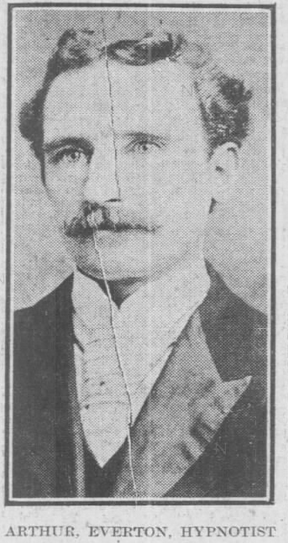 Today, hypnosis is regarded as a safe and effective treatment method used around the world to help people quit smoking, give up drinking, and lose weight. In the early 20th century, however, hypnosis was regarded as a mystifying parlor trick that could occasionally result in tragedy.

History records several examples of hypnosis gone wrong. One of the earliest incidents took place in Shenandoah, Pennsylvania, in 1903, when an amateur hypnotist-- in an attempt to impress members of the opposite sex at a bar-- put a young woman under his spell, which, in turn, put the young woman into a coma.

The American Journal of Clinical Hypnosis lists several possible health complications that could arise from hypnosis, ranging from dizziness and nausea to stiffness in the arm and neck and sexual dysfunction. The AJCH doesn't mention anything about death, however. Yet, there are well-documented cases of people who have died after being hypnotized.

One such incident took place in Somerville, New Jersey, in November of 1909. When a traveling magician, "Professor" Arthur Everton, asked for a volunteer from the crowd at the Somerville Theatre, the call was answered by a 35-year-old streetcar conductor named John Simpson, who was apparently intoxicated at the time. Whether or not Simpson's drunken condition had anything to do with his untimely demise is a question that remains unanswered, but it was reported that, while Everton's hypnosis was successful, his attempt to bring the volunteer out of the trance-like state was not nearly as effective.

Prosecutors wanted to charge Everton with manslaughter, but there was just one problem-- nobody was certain that Simpson really was dead. He looked dead and acted dead, but the local authorities had to be sure that the victim was not merely in a state of "suspended animation". In order to get their answer they called in William E. Davenport, who was not only the mayor's secretary, but also an amateur hypnotist to boot.

What happened next was perhaps the strangest scene to ever take place inside a morgue. Davenport, with Everton's assistance, attempted to resuscitate Simpson. The autopsy, which had originally been scheduled for 2 o'clock, was postponed so that the two hypnotists could try to bring the streetcar conductor back to life.
Davenport, accompanied by county physician W.H. Long and two other doctors, Charles Halstead and Francis McConaughy, poked and prodded Simpson trying to elicit a response. Davenport bent down to the man's body and whispered in his ear. "Bob," he whispered. "Bob, your heart action is beginning." He whispered this command several times. When Simpson's heart failed to obey the command, Davenport tried a different approach.

The amateur hypnotist decided to try a more conversation and jovial tone. "Oh, I say, Bob," he said with a smile, "your heart is starting to beat!" He continued grinning and chuckling at the corpse for several minutes, until the doctors had to drag him away from the body.

Finally convinced that Simpson was dead, Arthur Everton was charged with manslaughter.

He would never face trial, however. Simpson's autopsy revealed that the man had died as the result of a ruptured aorta. The coroner ruled that his death might have been caused by an undiagnosed aortic aneurysm, but local authorities insisted that Simpson's aorta had ruptured during the performance at the theatre; as part of the act, "Professor" Everton laid the hypnotized volunteer across two chairs, like a wooden plank, and jumped up and down on his chest to demonstrate Simpson's rigidity to the audience. Since either situation could have accounted for Simpson's death, the charges against Everton were dropped.