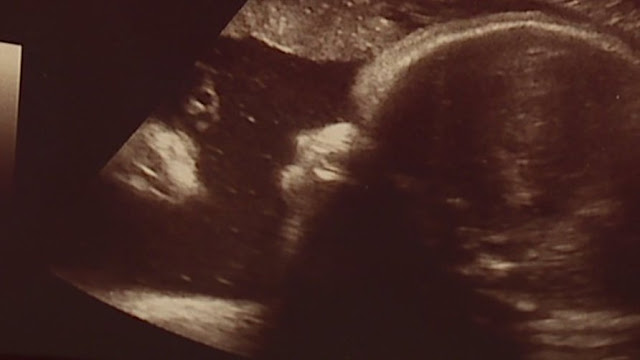 A couple from Chambersburg, Pennsylvania, believes that Jesus appeared in a sonogram, watching over the couple's daughter.

The parents, who admit to not being overly religious, insist that the sonogram shows a man in a robe wearing a crown of thorns. "This is distinct-- I mean, there's another face looking at my daughter!" said Zac Smith, the father, to WPMT. He said that the image made him emotional. "It almost brought tears to my eyes," Smith added, "I was speechless, I just couldn't believe it, I really didn't believe what I was seeing."

"When they gave it to us... Umm, to me, it's Jesus. And it looks like Jesus," said the mother, Alicia Zeek.

While opinion may be divided as to whether the Chambersburg couple experienced a legitimate religious miracle or if this is just a remarkable case of pareidolia, the fact of the matter is that Alicia and Zac have both found genuine comfort because of the myterious sonogram. Alicia experienced complications with her first two children, resulting in one being born with two fingers on one hand and the other being born with a cleft lip and palate.

But, according to doctors, the couple's new baby-- which they plan on naming Briella-- appears to be 100% healthy.