Can Charles Brandon talk to the dead?


"I am Charles Mark Brandon, duly authorized representative of the dead, and I am going to prove it!"
These are the words of a man who, from his nondescript modern apartment in Brooklyn, has produced scores of videos and photographs purporting to show evidence of the supernatural. Hundreds of these videos appear on his YouTube channel, "A Brooklyn Haunting", where the viewer comments run the gamut from "Wow, that's really weird" to the "Dude, what are you smoking?" variety.

In most of Charles' videos, the camera is fixated upon bathroom mirrors which allegedly reflect the faces of the dead, although some may speculate the faces are nothing more than a simple case of pareidolia caused by the combination of reflections of textured bathroom tiles, foggy glass and camera angles. Charles refutes this explanation, of course. "If I see faces, you see faces, someone else see faces, a bunch of people see faces, then how can it be this?" he says. "Its like two people having the same exact dream. Impossible!"

But the faces in the mirrors are just part of the strange things that Charles records. There are the usual orbs, marks and handprints on the walls which may or may not have been put there by phantasmagoric hands and, perhaps weirdest of all, a video entitled, "Ghosts showing me the galaxy in my mirror." It's just as the title suggests-- a bathroom mirror that reflects the cosmos (or, at least, something sparkly and colorful). Some might be tempted to ask why the spirits of the departed would decide to bestow an image of the Milky Way upon a bathroom mirror in some guy's apartment in Brooklyn, but, then again, there are people who claim to see the face of Jesus on a piece of toast in Milwaukee or the likeness of the Virgin Mary in a potato chip in Georgia. Much like the Lord Almighty, the spirit world works in mysterious ways. Who are we to question the celestial mechanics of the supernatural?

One thing is certain-- Charles Brandon doesn't question the strange things he claims to see on the mirrors, windows, walls and ceilings of his New York apartment. He simply records them. Dutifully. Religiously. Daily. Like a man on a mission. 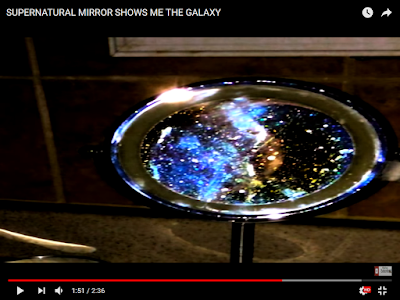 While some may argue about what these videos and photographs really depict (a floating orb or a speck of dust? Handprints of the dead or greasy fingerprints from the ghost of Kentucky Fried Chicken past?), nobody can argue with Charles Brandon's passion. He doesn't care if you see what he sees. He doesn't care if you believe him. And he doesn't care if one of his numerous YouTube videos garners dozens of thumbs-down and multitudes of snarky, sarcastic comments. He'll go right on believing that he is what he claims to be-- the duly authorized representative of the dead.

And, oddly enough, that's all part of his charm. When you talk to Charles Brandon you can't help but admire his tenacity, his unwavering passion and devotion. Some have accused him of being a hoaxer, but anyone hellbent on pulling off a scam would have given up long ago. After all, there are far more productive ways to spend time than by aiming a camera at a bathroom mirror for hours on end, day after day, month after month, waiting for a disembodied face to appear.

You can also rule out financial reward as his motive. Yes, it is true that his "A Brooklyn Haunting" YouTube channel does ask viewers to leave a PayPal donation, but we seriously doubt that the channel's creator is rolling through Greenpoint or Flatbush in a tricked out Rolls-Royce. There's really not much money to be made in this business unless you're a sexy 20-something with a Travel Channel show and a night-vison camera, who claims to feel cold spots when walking into a tourist-trap haunted bed and breakfast (We ought to know. In spite of JOTB's immense popularity and worldwide acclaim, our staff earns roughly enough each month to pay for a Grand Slam breakfast at Denny's [gratuity excluded].)

Charles, it seems, believes that his mission in life is to prove the existence of these spirits. He speaks for them, since they can't speak for themselves. "Imagine you are doing everything you can to be seen," he told us. "Do you have any idea how much energy it takes for them to do these things?"

This is perhaps true. Noted psychical researchers have, for decades, theorized that it requires an immense amount of energy for a spirit to communicate with the living. That's why they only seem to manifest themselves in fleeting apparitions, in faint EVP whisperings, in the occasional upsetting of a physical object on a shelf or a table. It is far easier for us, the living, to reach out to them. And, if this is true, Charles Brandon proudly welcomes the dearly and not-so-dearly departed with open arms. He is a one man welcome wagon for all ghosts, good and bad alike. For instance, while some of the faces that appear on his mirrors are peaceful and serene, others come across as angry, evil and demonic. That is, of course, if they are truly faces of the dead in the first place.

Although he lives in a Georgetown apartment built during the Reagan Era, the land itself is steeped in history. Known to local tribes as "The Broken Land" for its swamps and streams, this section of Brooklyn was first inhabited by Europeans in 1664 and eventually became a thriving hub of industry. It only takes a mildly active imagination to envision the spirits of long-departed Indian chieftains hovering over the grounds, plagued by an extreme case of buyer's remorse over the sale of their land. Had they known that, one day, Brooklyn would become a mecca for bearded hipsters willing to plunk down 8.50 for a can of Pabst Blue Ribbon, they might have held on to what they had.

And let's not forget that Brooklyn has more than its fair share of spectacular spooks, including the victims of the Great Brooklyn Theatre Fire of 1876.

But in spite of Charles Brandon's passion, paranormal researchers have not yet taken him up on his invitation to check out his haunted apartment. Actually, it's not so much an invitation as it is a challenge, something along the lines of "if you think I'm joking, come and see if for yourself".

"I have not had one paranormalist treat me with kindness," he says. "Not one scientist, medium, none of 'em, and I have talked to them all. The vitriol that they give me!"

Brandon says that he has even reached out to the inimitable paranormal skeptic, Penn Jillette, but to no avail. "He begged me to stop sending him my pictures," he added.

"It's just a matter of time until someone has the balls to come here and see it for themselves," he says. "I am more than prepared and able to prove my case, but no one will give me that chance."

So, if you're a paranormal researcher in New York, Charles Brandon cordially invites you to his home to have a look around. There's a chance that you might find some foggy mirrors reflecting pareideolic faces or maybe some handprints left on the walls by a housepainter long forgotten. But who knows-- you might also find a portal to another dimension and an eccentric man from Brooklyn who really can communicate with the dead.