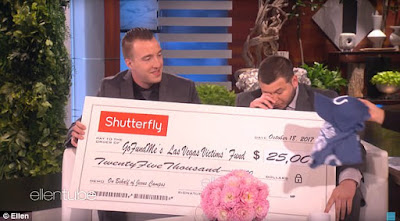 Jesus Campos, a.k.a. "The Vanishing Mandalay Bay Security Guard" finally emerged from hiding to give a highly-anticipated television interview. Being that he holds the key to solving the riddle of the ever-changing official timeline of events, Campos was sought out by journalists and television personalities throughout the country. He disappeared without warning, bailing on 5 scheduled television interviews, and emerged this week to appear on the Wednesday edition of Ellen DeGeneres' show.

Since "Ellen" is hardly synonymous with hard-hitting investigative journalism, Campos' decision to discuss the Oct. 1 Las Vegas shooting with DeGeneres left many people scratching their heads.
However, once you see how the threads of MGM and Ellen DeGeneres interweave, it's easy to put the pieces of the puzzle together and see why Campos agreed to appear on 'Ellen'.

First, in case you missed the interview, here's the summary.

During the interview, DeGeneres explained to viewers that Campos had decided to do just one interview because he doesn't want to "relive the shooting". This statement is puzzling because, on October 16,  Campos' union boss, David Hickey (president of the Security, Police, and Fire Professionals of America) told Fox News that Campos was looking forward to "telling his side of the story" and that it was Campos himself who requested permission to "go public".

These statements were made, incidentally, right before Campos bailed on Sean Hannity and four other would-be interviewers. It is also worth pointing out that, in our last post, we dug up quite bit of dirt on Hickey-- such as the fact that his home, as well as the SPFPA headquarters, were raided by federal agents in 2012 after it was alleged that Hickey stole money from union members who had been employed to guard a U.S. Air Force base and several nuclear facilities. Hickey, who is an amateur magician, reportedly used some of the pilfered funds on magic supplies and equipment.

Although Campos related his recollection of the massacre, DeGeneres-- for one reason or another-- refused to press him on the issue of the continually-changing police timeline.

One new piece of information was revealed during the interview, however. The 25-year-old security guard, who was given an award for bravery (by David Hickey, for the record), not only saved the life of maintenance worker Stephen Schuck, but also saved the life of a female hotel guest who had emerged from her room just as Stephen Paddock began shooting. According to Campos, he yelled at her to get back inside her room. This is interesting, because up until today no one had ever heard about this female hotel guest.

So, basically, not only is Jesus Campos a hero, he's a double hero! David Hickey is probably polishing up another award for bravery as we speak.

The segment ended with typical Ellen schmaltz; Campos grew teary-eyed as he was offered free Raiders season tickets by one of the show's sponsors (Shutterfly), while the NFL offered to fly Schuck to Indianapolis to watch his beloved Colts. (Since both teams have a combined record of 4-8 this season, maybe those weren't tears of joy after all).

But the question remains-- Why Ellen DeGeneres?

Although Degeneres explained that she invited Campos on the show to "celebrate" heroism (she also presented Campos and Schuck with a $25,000 check from Shutterfly made out to the Las Vegas Victim's Fund to prove the point), the real reason has less to do with charity and more to do with protecting the MGM brand (Don't forget, MGM stands by the timeline of events as stated by Campos and Hickey, not the alternative timelines offered by the police and the FBI).

And why should Ellen care about the MGM brand?

Ellen's production company, A Very Good Production, is helmed by Jeff Kleeman. Prior to serving as the president of A Very Good Production, Kleeman served as the Executive Vice President of Production for MGM/UA, where he played a key role in revitalizing a stagnant James Bond franchise (Ironically, Kleeman was also responsible for MGM's acquisition of "Leaving Las Vegas", a film whose main character is a suicidal alcoholic, much like Paddock).

Kleeman left MGM in 1999 but returned in 2007 as Executive Vice-President of Motion Picture Production. He became president of A Very Good Production in 2012. Although we can't confirm it, it's probably safe to say that, as a former MGM exec, Kleeman still owns plenty of stock in MGM Holdings, Inc. and possibly MGM Resorts International stock. It shouldn't matter that MGM Holdings and MGM Resorts International are two separate entities-- they are both two sides of the same coin. Much like Harvey and Bob, what's bad for one Weinstein is bad for another.

And the stock prices prove this point. Shares of MGM Resorts International stock plummeted after the Mandalay Bay shooting and continues to sink for days, only to rise again on Tuesday, October 17-- the very same day Ellen DeGeneres announced that she would be interviewing Jesus Campos. 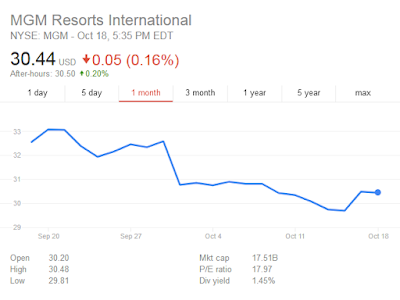 The same thing happened, albeit to a lesser extent, with MGM Holdings, which had a 52-week low price of $82.25 but now sits at $97.00. While this does not mean that the Las Vegas shooting affected MGM the movie studio to any great degree, the fact that the greatest mass shooting in modern American history originated from inside an MGM hotel doesn't exactly help.

Imagine what would have happened had Stephen Paddock opened fire from inside a Trump hotel-- you can bet your bottom dollar that the mainstream media would somehow try to connect the incident to the President.
conspiracies Ellen DeGeneres Jesus Campos Las Vegas Stephen Paddock