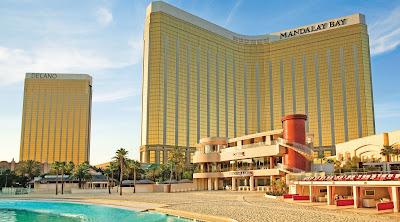 Our regular readers have probably noticed that we don't delve into conspiracy theories as much as we used to, the reason being that it's not a lot of fun receiving angry emails threatening us with violence or lawsuits. A few months back we wrote an article about Seth Rich and it only took about 45 minutes before the death threats came rolling in (someone eventually flagged our article and those First Amendment-loving patriots at Google forced us to remove the piece). We also wrote several articles about Sandy Hook, only to be threatened with legal action by no less than four parties related to the victims (which seemed strange, since we never definitively concluded that Sandy Hook was a hoax, false flag or cover-up. In fact, we debunked quite a few claims made by some prominent Sandy Hook "Truthers"). When it comes to conspiracy theories, apparently you can't please everyone.
But the recent developments in the Las Vegas shooting case has forced us to once again question the official narrative of events.

On Monday, Sheriff Joseph Lombardo of the Las Vegas Metropolitan Police revised the official narrative, stating that hotel security guard Jesus Campos was shot by Stephen Paddock around 9:59 p.m. on Oct. 1, minutes before Paddock opened fire on concertgoers at the Route 91 Harvest Festival.
The original official version of events stated that Campos told Las Vegas officers he had been shot at 10:18 p.m., or three minutes after Paddock's shooting rampage ended. Law enforcement praised Campos as a “hero” for his role in aiding police during the mayhem at the Mandalay Bay Resort and Casino.

According to the New York Times, Sheriff Lombardo downplayed the significance of the altered timeline, stating that such changes are common in complex investigations, which, of course, is true. During a Monday news conference, Lombardo said that Jesus Campos had been on the gunman’s floor to investigate a "door alarm in another room" and that after being wounded, Campos immediately reported to casino security officials that he had been shot. “But what we have learned is that Mr. Campos was encountered by the suspect prior to his shooting to the outside world,” Sheriff Lombardo said on Monday.

As a result of the altered timeline, conspiracy theorists have turned their attention away from shooter Stephen Paddock to Jesus Campos-- and for very good reason. Campos' story has more holes than the walls of the 32nd floor of the Mandalay Bay Resort (authorities now claim that Paddock fired hundreds of rounds "down the hallway" before firing his first shot into the crowd of concertgoers).
Some have even speculated that Campos may have been the alleged second shooter. But that's not where we're going with this post. At the risk of being accused of peddling "fake news", we'll just stick to the facts as reported by legitimate media outlets.

For example, Newsweek reports that Campos's co-worker, Liliana Rodriguez, started a GoFundMe account for Campos on October 3, claiming that he'd been shot while on "random patrol".

If Campos had been sent to the 32nd floor to investigate a door alarm, how the heck is that considered a "random patrol"? There's nothing random about it. Actually, it's pretty darn specific. So we can deduce that somebody isn't telling the truth.

Oddly, no pictures of Campos were included on the GoFundMe page, which had been set up (according to Rodriguez) to "provide relief and financial support for him while he gets back on his feet. This is a young man that I work with day in and day out. Any financial support would be appreciated for the time he would need to recover."

And yet, during a post-shooting interview with ABC News, Campos admitted that his injuries weren't very serious, telling ABC News, "I'm fine...I was just doing my job." This seems to call into the question the necessity of setting up a GoFundMe page. We're no experts on Nevada labor law, but we're fairly certain that Campos' employers footed the bill for his work-related injuries.

On Tuesday, Oct. 10, Kevin McMahill of the Las Vegas Metro Police told local media outlet KNPR that "Campos went up to the 32nd floor to investigate a door alarm. While on the 32nd floor, he found that a stairwell door was jammed and radioed down to maintenance. Campos heard a drilling sound and thought it was odd. A maintenance worker came up to the 32nd floor. As the pair started talking, Paddock began firing through the door of his room, first with a single-fire gun and then with a rapid-fire rifle."

This is the first mention anywhere of a drill being in Paddock's possession. On Oct. 3, NY Daily News listed the items recovered from Paddock's room, and there was no mention of a drill. Leaked photos of the gunman's room also fail to show anything remotely similar to a drill. Several media outlets reported that some of the other items found in the room included a roll of electrical tape, paper and a pen. It seems rather bizarre that they would report the discovery of something so trivial as a roll of tape but not a power tool.

Although it has not yet been verified, the drilling sound Campos heard must have come from Paddock as he installed hidden cameras in the hotel-- one in his suite, two in the hall, and one on a service cart. Undersheriff Kevin McMahill said that Campos was shot shortly after hearing the drilling noise coming from Paddock's room. This does not hold water, and here's why.

After drilling the hole, Paddock would have had to install the hidden camera (after all, police said they found four cameras, not "three cameras and an empty hole where he was planning on putting a fourth". From this we can deduce that Paddock had enough time to install the camera after drilling the hole, spot Campos and the maintenance worker, grab a gun, and begin firing. It's probably safe to assume that Paddock spotted Campos and the maintenance worker though either the hallway cameras or the dining cart camera. At any rate, it seems odd that Campos could hear a drill from inside a hotel room behind a closed door, but very few hotel guests heard hundreds of rounds being fired "down the hallway" before Paddock turned his attention to the concert crowd.

Another peculiar incident was reported on Tuesday by conservative investigative reporter Laura Loomer (of Project Veritas fame). According to Loomer's investigation, Jesus Campos has been inexplicably deleted from MGM's internal employee database (Mandalay Bay is owned and operated by MGM). A spokesperson for MGM Resorts International declined to comment on Loomer's report.

But even that is not the biggest question mark surrounding the mystery of Jesus Campos. It has been reported by numerous credible sources that Campos' Las Vegas home is being guarded by armed private security officers. Naturally, this is understandable-- Campos is an extremely valuable witness and must be protected. But here's where things get murky; according to Loomer, the armed private security company guarding the Campos home has been identified as "On Scene Investigation & Security, Inc."-- a company whose business license expired in January of 2017.

This, of course, begs the question: Who is footing the bill for Jesus Campos' private security?

If Campos is no longer employed by MGM, where's the money coming from? Our guess would be from Liliana Rodriguez's GoFundMe page. If this is the case, it means that Campos would've been fired between the time of the shooting (October 1) and the creation of the GoFundMe page (October 3).

The Nevada Secretary of State's business license verification website indicates that On Scene isn't, and apparently never was, a thriving company. The listing indicates a working capital of $0 and the company's president, secretary, treasurer and director all happen to be the same individual, Richard Klein. The business is headquartered at 5550 Painted Mirage Road #320 in Las Vegas. 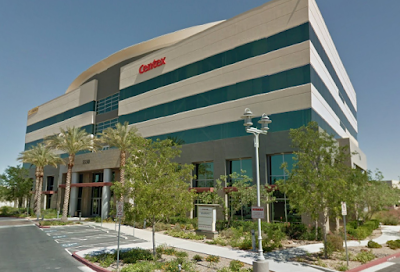 A Google search of this address reveals that this property is owned by DaVinci, a company that specializes in "virtual office spaces". For $65 per month, a business can purchase a "virtual" office complete with a private mailbox. Actually, the DaVinci Virtual Office Solution website states that that's pretty much the only perk of renting a virtual office space, besides getting "Use of address for business cards, licensing, website, etc."

In other words, if you run a fly-by-night operation and don't want or need the hassle and expense of renting a real office, DaVinci Virtual Office Solutions can help.

Incidentally, Suite 320 seems to get passed around more than a five dollar hooker; scores of businesses have used this very same address. One company who shares the very same business address as On Scene Investigation & Security, Inc. is Bravo Show Productions, an event production company whose homepage promises: "We understand what it takes to create, develop and orchestrate successfully memorable events". According to their website, Bravo also specializes in concerts. We're not implying that anything related to the Las Vegas shooting has been pre-planned and orchestrated, of course, but that ought to be enough to keep a conspiracy theorist's head spinning for a while.
conspiracies Jesus Campos Las Vegas Stephen Paddock