The Suicide Feast of Ho Why 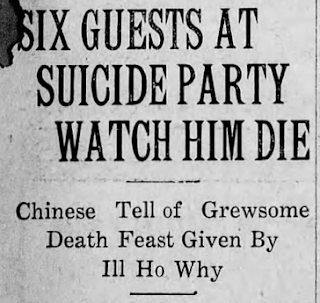 In the summer of 1913 a strange feast took place in Atlantic City, New Jersey. The culmination of the banquet resulted in six Chinese men being arrested, accused of playing a role in the bizarre suicide of Ho Why.

Ho Why had arrived in America twenty-six years earlier and opened a Chinese laundry at 200 Kentucky Avenue. It was a popular line of work among Chinese immigrants, who devotedly toiled over their washtubs to send money back to families in China. Ho Why was a hard worker, and his years of labor had caused him develop a chronic illness. He coughed all the time, he grew frail and dangerously thin, and everyone knew that his time in the mortal realm was drawing to a close. But to Ho Why, his greatest shame was the fact that he had no son and that the family name would die along with him.

In June of 1913 Ho Why sent invitations to all of his friends and relatives living in the United States to join him in a sumptuous feast. From New York came Shu Nan, Lee Don and Hong Jan; from New Jersey came Charlie Son, Ling Dope and Charlie Lee. Though the invitation was lacking in details, all of Ho Why's countrymen knew what this meant. They dressed in their finest clothes and spent hours grooming themselves to perfection.

At 6 o'clock on the appointed evening, all of the guests assembled themselves at Ho Why's laundry. Their host had carefully drawn the curtains of his shop and closed the laundry business early, and Ho Why's friends greeted him with smiles and warm embraces before retiring to the rear room. By all accounts it was a pleasant dinner and a very formal affair; the guests dined with ivory chopsticks.

After the feast, Ho Why arose and laid down his ornate fan and then hobbled to a tiny cabinet, returning with a revolver. The guests bowed to their host and lit their opium pipes with long, bamboo stems and tiny silver bowls. The attendees grew serene and watched their host as he sat himself stoically upon a wooden stool. Ho Why put the muzzle of the revolver against his right temple and, without a word, pulled the trigger. His friends puffed their pipes in silence and watched their host sink to the floor. Shu Nan put down his pipe and then retrieved the body of his dear friend.

According to the newspaper reports describing the suicide feast, Patrolman Marshall smashed down the door and arrested the guests, charging them with being accessories to murder. The Chinamen were confused; they had followed their customs and traditions to the letter. At the precinct house they explained to their captors that Ho Why had died with honor and, after much debate between the enforcers of Western law and the disciples of the Eastern traditions, it was decided that all charges would be dropped.

The story of Ho Why's suicide feast doesn't have anything to do with ghosts or monsters or the paranormal, of course. It is merely food for thought, a reminder that what is noble and honorable in one land is often viewed with disgust and disdain in another, and that what is considered a violent and ugly death to some people, is a most beautiful way to die to others.
death