Did an unknown French Canadian trapper beat Peary to the North Pole? 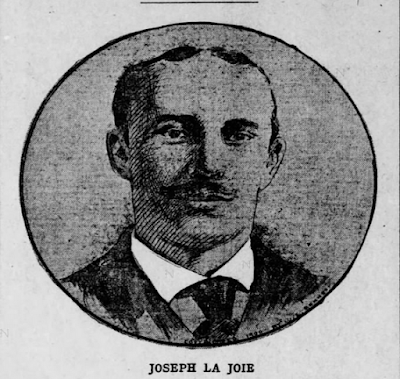 Ever since April 6, 1909, history books have recorded Robert Edwin Peary as being the first person to reach the North Pole. Some scholars, however, claim that explorer Frederick Cook bested Peary by reaching the North Pole on April 21, 1908. While the Cook-versus-Peary debate has been going back and forth for over a century, it may all be a moot point-- since it's very likely that the first person to reach the North Pole was neither Cook nor Peary, but a little-known French Canadian trapper by the name of Joseph Zotique La Joie.

In the spring of 1900 a French Canadian fur trapper traveled to Washington, D.C. on a mission to prove to the scientific community that he was the first person to reach the North Pole, and had done so in 1894. This man, Joseph Z. La Joie, checked into the Hotel Raleigh on March 14 and entertained some of the world's foremost experts on Arctic exploration. Those who met with La Joie included famed polar explorer Gen. Adolphus Greely and Admiral George W. Melville who, in 1881, earned international fame for sailing over a thousand miles in the middle of the Arctic winter to recover the frozen bodies of crew members aboard the ill-fated USS Jeannette. Professor J.W. McGee of the Smithsonian Institution was also present.

According to La Joie, he and his father departed from Montreal in December of 1886 and headed to Battleford in the Northwest Territories. After spending three years hunting and trapping the two men reached Great Bear Lake, on the Arctic Circle, in the fall of 1889. They found game to be scarce, so La Joie and his father enlisted the help of a guide named George White who directed the trappers north, to a point near Cape Brainard on Ellesmere Island, which is the northernmost point in Canada (incidentally, it was Greely who had led the expedition to explore the island in 1881).

At Cape Brainard the three trappers spoke at length with native Inuits, who told them of an old iron post left behind by polar explorers a few miles north of the cape. La Joie found the metal post, inscribed "82 degrees latitude north, 83 degrees longitude west" (in all likelihood the post had been placed there by the members of the Greely Expedition eight years earlier).

The fact that La Joie accurately described this metal post to the very man who perhaps planted it lends credence to the trapper's claims; at nearly 76,000 square miles, Ellesmere is the 10th largest island on the planet (the Inuit word for the island is Quttinirpaaq, which means "top of the world") , and finding this tiny relic in the remote expanse of virgin polar desert would be infinitely more difficult than finding a needle in a haystack.

Although records of the Hotel Raleigh meeting are scarce, one can only imagine how surprised Greely must have been to learn that a fur trapper with no formal education, no military or navigational training, and no credentials as an explorer had managed to find the iron post. At any rate, records show that Greely didn't call La Joie out as an imposter or a fraud, which he most certainly would have done if La Joie had failed to describe the metal post accurately.

In May of 1892 the three trappers established a camp a few miles from this site at "the junction of two immense icebergs". White suggested that the three men and their dogs separate and each take a ten days' journey in three different directions. Ten days later they were to return to camp and compare reports in order to locate the best hunting grounds. Seven days into his journey La Joie felt a tremendous jolt not unlike that of an earthquake; the ice had parted and he was adrift in the Arctic Ocean. The enormous ice raft drifted north. 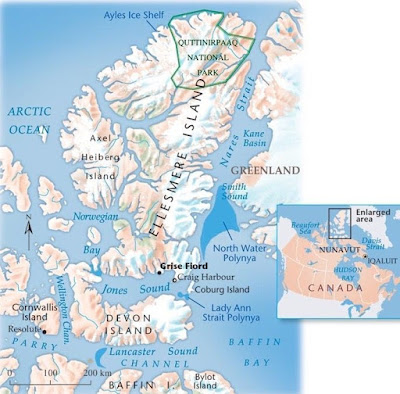 Joseph La Joie spent 36 days on this drifting frozen prison. For the first three days he subsisted on fish, but when fish became scarce he had no choice but to slaughter his dogs for food. According to La Joie, he ate six of them.

The iceberg eventually touched land and he went ashore with his remaining dogs. There, he says, he encountered a "strange race" of copper-skinned natives who attacked him with clubs and arrows, but he was protected by his bulky clothing. La Joie stated that these natives did not speak the same language as the Inuits or wear the same style of clothing. He also described them as being gigantic in stature, with most of the men standing taller than six feet in height. He eventually made peace with the tribe and lived among them for five months.

One of the reasons why La Joie's North Pole claim has been dismissed is because, at the time of his trip to Washington in 1900, most experts did not accept that there was a race of natives who lived further north than the Inuits. However, in recent decades, archaeological evidence has corroborated this part of La Joie's story; a race called the Tuniit were the island's first inhabitants, and these copper-skinned natives were considerably taller than the neighboring Inuits. This race was unknown until 1925, when anthropologist Diamond Jenness discovered some of their artifacts near Cape Dorset. The fact that Joseph La Joie accurately described their appearance and culture twenty-five years earlier lends further credence to La Joie's story.

La Joie claimed that he lived among these natives for two years, during which time he hunted and explored the range of mountains on the northern tip of Ellesmere Island now known as the Challenger Mountains and Grant Land, which was the final point on land for Peary's famous 1909 expedition (the geographic North Pole, of course, is not on land but in the middle of the Arctic Ocean).