The Headless Ghost of Allen Bayou 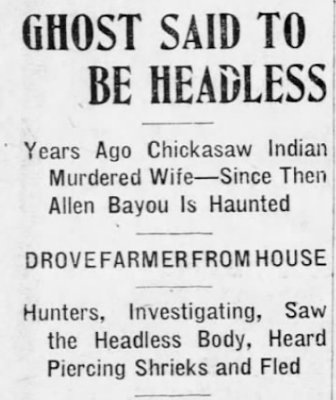 We came across the following article in the November 8, 1907 edition of the Pittsburgh Press and enjoyed the writer's first-person account of a spectacular haunting so much that we decided to reprint the original article.


Galveston, Tex., November 8.-- Thirty years ago, when the writer first visited the Allen Bayou country in the Chickasaw Nation it was as lonely a spot as a man would wish to see. The nearest habitation to our hunting grounds was nine miles distant, the home of an old hunter, Joseph Bozarth, who has long since passed to the happy hunting grounds.

About two miles distant from our cabin was a place said to be haunted. It was a shack without doors, without windows, and the chimney had fallen down. The cabin was situated in dense woods, cut off from any public road. There was an old cow path, but even that had been obliterated by the dense underbrush. A more admirable place for a haunted house could not be conceived of. To stumble on this place in the gloaming was enough to make the flesh creep and give one an impulse to flee. No person had lived in this cabin for many years, in fact no person could live in it, as it was said to be haunted.

A horrible murder was committed there; an Indian killing his wife in the most brutal manner-- cutting her throat and severing her head with an axe.

After the commission of the deed he fled the country, and it was said he went to the Comanche country and died there. A white man with his family moved into the cabin a short time after and opened up a small farm. The land was good and the spring furnished an abundance of pure water. Game was plentiful and there was fish in the streams and wild honey in the trees. The man used to boast that he had the biggest gun and the prettiest wife in all that diggings. The Indians said that he used to boast that way. He declared that he was not afraid of ghosts and haunts; in fact, he invited their presence, as he needed company.

It was not long before he heard strange noises and a voice that seemed to whisper out of the air. There were suppressed moans; there was a heavy intonation as if a body was falling to the floor. A headless woman glided through the room and disappeared through the front door.

The man moved away. The dreadful rehearsal of the murder so frightened the wife that she fled to the nearest neighbor. The brave man who was not afraid of ghosts was not long in following. The cabin was deserted and accursed. It was the terror of the whole settlement. The bravest cowboy on the range was careful not to be overtaken at night at or near the haunted cabin. Many people would swear to the sights and sounds seen and heard there.

Frequently a lost or belated hunter un acquainted with the history of the cabin would seek it for shelter and tell to the camp his experience next day only to excite ridicule. All of the hunting parties from Texas heard of the haunted cabin, and they all avoided it.

While in camp one winter on Allen Bayou an Indian passed the night with us, and while seated at the campfire related the details of the murder and said the stories of the scenes enacted there were true, and if we would go over some night that we could verify the experiences of others.

We determined to go, taking as a companion a Mr. Sumner, who had come all the way from Philadelphia to pass the winter in the woods. He was a little, dried-up old man, not very sociable, who brought to Texas with him his Eastern ideas, one of which was that a hunting camp should furnish the luxuries of a modern hotel. Yet with all that we passed two very pleasant months with him.

Sumner and the writer reached the cabin about an hour before sunset. We examined every nook and corner of the cabin. The floor was rotten and had fallen in, and there were holes in the roof. A musty odor seemed to pervade the atmosphere. Sumner wanted to remain in the cabin, but we suggested that the performance could be very well seen and heard on the outside.

Night was descending on the wilderness. The stars commenced to blink in the firmament, Finally that waning red moon which had just passed its fullness rose slowly above the horizon and added light to the dreary undulations of the wilderness. The gaunt gray wolf who sends his hoarse voice across the ravine in a howl, the most dismal and harrowing sound that ever disturbed midnight and silence, was abroad; the owl screamed in the thicket, and night birds darted through the gloom.

We suggested to Sumner that we return to camp. The truth is, the night sounds of the forest were about as scary as any ghost in the neighborhood. In the language of the schoolboys, "I wanted to go home!"

The trees began to whisper-- they fairly talked-- the beautiful calm of a moonlight was quickly succeeded by another, the moon disappeared under a bank of clouds. All the conditions seemed perfect to have the headless woman rehearse the murder scene. Our imagination was keyed up to the extent that the surrounding gloom seemed peopled with ghosts. My hair almost rose on my head when a wild animal darted through the brush. Suddenly I heard a noise in the direction of the cabin.

"What was that? Did you hear it, Polk?" spoke Sumner. I had not only heard it, but I actually felt it. It was a cry more dismal than the shrieking wind. Inside the cabin there seemed to be a certain struggle going on. At the cabin door was a thing in white-- a human form-- headless.

I could feel my hair rise and my heart stop beating for an instant. What was the thing? It seemed to float and then dissolve in the night shades. I said to Sumner: "For God's sake, let us leave this spot!"
"And the sooner, the better," replied Sumner.

Sometimes I thought I could hear people talking in the air and the laugh of goblins.

It was past midnight when we reached the camp. The boys stirred in their beds and wanted us to tell them all about it. They laughed and made fun, but until the day of our death we shall always believe that a ghost is a palpable reality, and Sumner never questioned that what we heard in the cabin was the Indian woman whose troubled spirit came back to earth.
ghost stories ghosts Native Americans Texas