The uncanny misfortunes of George Flower 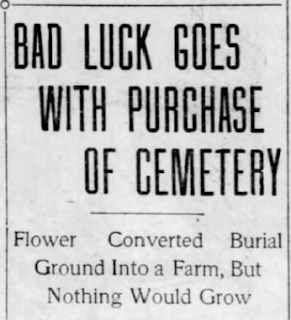 George Flower, a farmer from Indiana who lived during the early 20th century, was a man whose name is little remembered today. He amassed no great fortune, nor did he rise to a position of power. But his little-known story and strange legacy should be remembered as a cautionary tale about what happens when a mere mortal decides to tempt fate.

Flower's troubles began in 1902 after he purchased a strip of land in Sand Ridge, near the city of Vincennes, in order to enlarge his farm. On this strip of land was the oldest cemetery in the area, containing more than three hundred graves. Flower pulled up the headstones, using them to build a foundation for his new home. The unused headstones he threw in the Embarras River. He then plowed up the land and planted melons and potatoes.

Shortly thereafter he noticed that that, while the crops he planted on the rest of the farm flourished, the crops he had planted on the grounds of the old graveyard withered and rotted. Some of the crops were ravaged by unseen pests and insects and, try as he might, Flower could not find a logical explanation for the phenomenon.

But that was just the beginning of George Flower's troubles.

In August of 1902 the Philadelphia Inquirer reported that the Flower family home-- with its foundation built from the gravestones of Spencer County's earliest settlers-- was haunted. For several nights in a row the house had shaken violently until, finally, Flower grabbed his wife and children and abandoned the dwelling. Meanwhile, Flower found himself up to his neck in legal woes; descendants of those who were buried in the old cemetery threatened to sue the young farmer for desecrating the burial grounds.

With so much anger being directed at them by the locals, the Flowers couldn't help but wonder if their bad luck wasn't caused by supernatural forces, but by pranksters and neighbors hellbent at driving the family away. George returned to the farm every day, but never stayed too long; he claimed that an overwhelming sense of fear and dread overwhelmed him whenever he came back to visit.

On August 15, 1902, an event occurred that dispelled any notion of pranksters or practical jokers-- lightning struck the Flowers barn, and the ensuing fire quickly spread and obliterated every structure on the property. George and his family never returned and they lived out the remainder of their lives in quiet obscurity, but not without leaving behind as their legacy a real-life parable about why it's never a good idea to disturb the dead.
fate Indiana Strange History