Haunted by his victim: The bizarre tale of Edward Unger 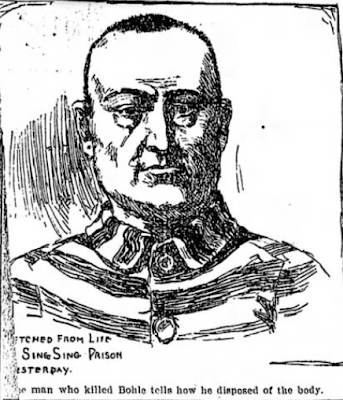 Located on the east bank of the Hudson River, Sing Sing Correctional Facility in New York is known throughout the country for housing some of the most violent outlaws in the world of crime. Over 600 criminals were executed at Sing Sing, and so it is not surprising that this famed prison in notoriously difficult to escape from.

And while escaping from a maximum security prison like Sing Sing is a monumental challenge in itself, a 19th century inmate named Edward Unger faced an even bigger challenge-- escaping from the ghost of his murder victim.

But the ghost that drove Unger over the brink of insanity is just one part of the story. There's also a sensational murder at the heart of this strange tale.

Once upon a time, long before Edward Unger ran a tiny saloon catering to lowlives and roughnecks who lived along the Bowery, he was a war hero. He earned a medal of honor and rose to the rank of captain during the Civil War, participating in a dozen bloody battles as a member of the 11th New York Infantry Zouaves.

Two decades later, the once honorable Captain Unger found himself scrabbling to pay the bills, eking out a pitiable existence with his seedy saloon. By Unger's account, business was not good. In October of 1886 he placed an ad in the newspaper looking for a business partner, and it was answered by a man named August Bohles.

Bohles was a handsome German fellow who had made his fortune in the Chicago stockyards butchering cattle and selling sausage. Together, Bohles and Unger hatched a scheme to make and sell sausages from inferior-quality horsemeat. Bohles put up the money for the venture and moved into Unger's house at 22 Eldridge Street, which the captain shared with a teenage son named Edward.

The horse sausage scheme fizzled and Unger was forced to sell his saloon. Tensions between the two business partners boiled over on the night of January 20, 1887, after an evening of drinking. It was a bitter cold night, and Bohles could not sleep. He growled about the cold until Unger agreed to fix a fire. Even after the fire was lit, the German butcher continued to complain. A shoving match ensued. Unger reached for the poker but Bohles yanked it from his hand, and then he grabbed a carving knife. Unger scanned the room and spotted a hammer. What happened next is a matter of debate, but the confrontation ended with Captain Unger bludgeoning the German in the head with the hammer.

"Suddenly I became possessed of a desire to kill," Unger later confessed. "I struck him with all my strength on the head. The hammer head sank out of sight in his skull. The blood and brain that flew only added to my frenzy. I struck him again after he lay dead on the sofa."

Rage soon gave way to horror when Unger realized what he had done. His first impulse was to flee the scene, which he did-- until he realized that he had to go back and dispose of the body. He would tell anyone who asked that Bohles had gone back to Germany. Unger knew that his son would soon be returning home, so he had to act quickly. He rolled the body in a cot and hid it inside his room until morning.

In the morning he bought a saw and a rubber tarp. He hacked off the German's head and suddenly became queasy when he gazed into the dead man's wide open eyes; after a few shots of whiskey his nerve returned and he finished the task. After cutting the body into smaller pieces, he stuffed the remains into Bohles' trunk, except for the head. This he wrapped in old clothing and newspapers put into a dresser drawer.

After shipping the trunk to a random address in Baltimore, Captain Unger took the bundled up head onto the Williamsburg ferry and dropped it into the river when nobody was looking. Unger says he slept easy that night, convinced that his crime would never come to light.

Captain Unger made one grave error, however; it had never occurred to him that dead meat begins to stink after a while, and it was the odor of rotting flesh that attracted the attention of agents at the Adams Express office in Baltimore, where the trunk had sat unclaimed for three days.

The chief of police ordered the trunk to be opened. Inspector Thomas Byrnes, the leading detective of the era, was put on the case.

Coincidentally, Byrnes and Unger had fought side by side during the war as members of the 11th New York Infantry. Stranger still, both men had risen to the rank of captain. Yet their respective paths led in divergent directions; Byrnes would go on to become one of most famous detectives in American history, while Unger became one of the most famous murderers in the history of the New York City.

"I was about going home on a Wednesday afternoon when I received a telegram from Chief Frye of Baltimore," Inspector Byrnes later recalled. "A headless body! That was certainly a novelty, and I became greatly interested."

Inspector Byrnes traced the trunk back to Westcott Express, where it was revealed that the trunk had been shipped from Bense's Liquor Store on Kent Avenue. The trunk was identified as belonging to August Bohles, and the inspector learned from a receipt that the German butcher had been residing at 22 Eldridge Street. Neighbors told the inspector that the butcher had been sharing a house with Edward Unger. Unger, coincidentally, matched the description of the man who had brought the trunk to the liquor store.

Unger, who claimed that he murdered his friend in self-defense, was tried, convicted, and sentenced to twenty years at Sing Sing.

"He acted as if a great load had been lifted from his mind," the inspector recalled, after Captain Unger had confessed his crime. But for Captain Edward Unger, his troubles were just beginning.
It was during Unger's first night at Sing Sing when the ghost of August Bohle began tormenting him. Unger was awakened from his sleep and he found his dismembered victim on the floor. Before his very eyes the ghost began to reconstruct itself from the pile of phantom body parts.

Every night for the week the apparition appeared, and each night it assembled itself in the presence of the petrified prisoner. First the severed limbs would appear on the floor of his cell, and then the fragments would begin to quiver. The body parts would crawl slowly toward each other and arrange themselves into human form. "But the head is missing," Unger claimed. "At length that, too, comes into the room, with its hair dripping with the water of the river in which it has lain. With a horrible smile on its face it places itself on the shoulders of the figure."

At this point, Unger would let out a blood-curdling shriek, and the apparition would vanish.

By the end of Unger's first week at Sing Sing, Captain Unger-- the once valiant hero of the bloody battlefields of the Civil War-- had been rendered delirious and had to be moved to the prison infirmary. In just one week he had grown frail and emaciated, and the prison physician ordered his removal to the state asylum for lunatic criminals.

But something remarkable happened to Edward Unger before he was to be put into the state asylum.

Like the breaking of a fever, the hauntings ceased, the chills were gone, and the convicted killer was reborn-- a changed man forever. He was released from Sing Sing for good behavior in June of 1899, seven years earlier than expected. During his time in prison he was employed in the mess hall and, according to Warden Johnson, was "one of the best cooks as well as one of the best prisoners" to have ever occupied the famous penitentiary.


The change in Unger lasted for the remainder of his life, and he became something of an expert when it came to "trunk murders" and assisted detectives-- including Inspector Byrnes-- whenever a similar case cropped up in New York City.

And it did quite often, unfortunately. Because of the tremendous national publicity surrounding the murder of August Bohles, hacking their victims to bits and stuffing them in trunks to be shipped away to far-off destinations became a favorite way for killers to dispose of incriminating evidence. Although he never intended for it to happen, Captain Unger's method of murder spawned a ghastly trend in the world of crime.

While some could argue that the decapitated ghost of August Bohles was merely a hallucination brought on by guilt, the fact remains that the strange visions seen by Edward Unger played a pivotal role in turning his life around after being driven to insanity and back.