The Parhamites: A Tale of Jesus, Pedophilia, Sodomy and Strangulation

Of all the religious cults in American history, few have had a reputation of debauchery like the Parhamites, a strange Pentecostal community founded by preacher Charles Fox Parham in the early years of the 20th century. While Parham is still remembered as a pioneer of American Pentecostalism (it was Parham who popularized the Pentecostal practice of "speaking in tongues", or glossolalia), most have forgotten the sensational scandals associated with Parham and his maniacally devoted followers.

As a young man in Kansas, Parham belonged to the Methodist Episcopal Church and began preaching at the age of fifteen. A disagreement with church leadership led him to abandon the Methodist faith, and inspired Parham to start his own non-denominational ministry. In 1900 Parham established Bethel Bible College in Topeka. Although the school charged no tuition, the controversial and often bizarre beliefs of its founder prevented the college from flourishing. Within a few months, Parham was broke.

While preaching to a crowd in El Dorado Springs, Missouri, in 1903, a Kansas socialite named Mary Arthur told friends that she had been healed through Parham's preaching and, before long, huge crowds were clamoring to see Parham. Local newspapers praised Parham's seemingly miraculous powers of healing and the preacher soon found himself surrounded by a core group of devout followers, who would become the first Parhamites.

Parham instructed these disciples to travel throughout the Midwest and preach his message. While other leaders of religious movements encouraged followers to dress modestly, Parham instructed his followers to be stylish and trendy, knowing that it would go a long way in attracting new people to his church. The ploy worked; within a few years Parham's religious movement gained a strong foothold in Oklahoma, Kansas, Missouri, Texas and Illinois.

1906 was a turning point for the Parhamites. In September of that year Parham traveled to Zion City, Illinois, in an attempt to win over the disgruntled followers of a disgraced preacher by the name of John Alexander Dowie, who had founded Zion City as a base of operations for his Christian Catholic Apostolic Church.

Dowie, who was born in Scotland, had a shadowy past long before he even reached the United States. During the 1880s Dowie's church was based in Australia, and it later burned down under suspicious circumstances. It was rumored that Dowie has set the blaze himself for financial gain. After absconding with the insurance payout, he settled in San Francisco in 1888 and eked out an income by performing faith healing. He eventually found great success in Chicago and purchased a large tract of land forty miles away, which he named Zion City.

At its peak, more than 6,000 of Dowie's followers lived in Zion City under their leader's strict totalitarian rule, and deposited their life savings in the Dowie-owned Zion Bank. Dowie abandoned Zion City for Mexico in 1905, taking approximately $3 million with him. This left Dowie's followers in need of a new spiritual leader, and Charles Fox Parham was happy to oblige.

It was a decision he would live to regret.

These accusations produced a wave of hysteria in Zion City, where half the population still supported Dowie and half the population pledged their spiritual allegiance to Parham. But things went from bad to worse when the Parhamites began murdering each other in bizarre "exorcism" rituals. 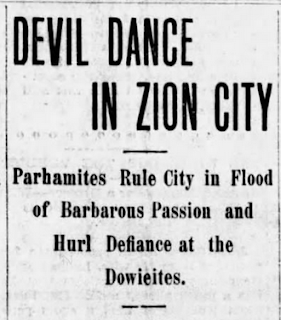 In September of 1907, five Parhamites were arrested in connection to the torture and death of 64-year-old Letitia Greenhaulgh of Zion City. Harold Mitchell confessed to choking the woman, but claimed that the devil made him do it-- literally.

According to Mitchell (whose wife was a high priestess in the Parhamite cult), he was "seized by demons", and when under the influence of these demons he felt an uncontrollable urge to "take a grip on the throat of a human being and crush until life is extinct". On September 21 he was arrested, along with his wife and the son and daughter of the victim.

Five Chicago enthusiasts who twisted the arm and neck of their patient too hard, in attempting to drive out a devil, are under arrest, charged with murder. They drove out life. What disposition they made of the devil is not stated. The account of the treatment by the Parhamites of their aged and crippled victim is a story of ignorant frenzy and religious mania carried to the last degree of absurdity.-- Ottawa Evening Herald, Sept. 21, 1907. 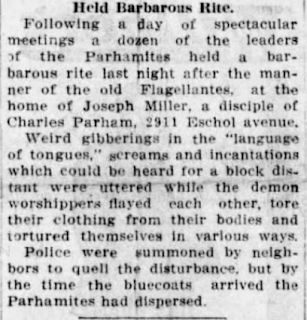 Court documents indicate that the five Parhamites had planned their actions down to the last detail. Knowing that the woman's husband was a supporter of Dowie, they lured him away from the house on a false pretext. When Mrs. Greenhaulgh was alone, the Parhamites entered her bedroom and grabbed the bedridden woman by the limbs. "Mitchell took her by the hand," the victim's son, Walter, testified, "and pulled her arm away from her body. She screamed. Oh, she screamed terribly. I jumped forward. Mitchell held me back and put his hand over my mother's mouth and stopped her cries. He said... those cries are not her cries. That is the screaming of the demons and devils as they leave her. She is all right."

"They took her arms and drew them out straight. There was a cracking sound. I found out afterwards that they broke the bones. They did the same with her legs. They pulled at her head. They pinched and worked her flesh. She groaned and cried out. They said she would soon be all right."

The fervor surrounding the death of Mrs. Greenhaulgh led to an investigation by authorities, and several other suspicious deaths in Zion City were linked to the Parhamites, including the tragic death of a young boy named Frank Crowe, whose Parhamite parents had denied him medical treatment for his typhoid fever. Witnesses who were at the boy's bedside claim that he cried piteously for water, which his parents refused to provide. They told their dying son that the Lord would provide water. They later thrust their fingers down the boy's throat in order to yank out the "devils that were tormenting him". The coroner who examined the body stated that the boy's tongue had nearly been cut off, as though with a knife.

Mitchell, a self-described "demon doctor", played a leading role in many of the suspicious deaths in Zion City. Mitchell's unfortunate "patients" included a Miss Young, who was choked to death, a Miss Anderson of Gilead Avenue, Miss Payne of Enoch Avenue, and Miss Zimmerman of Gilead Avenue. Apparently, Harold Mitchell believed that Satan was fond of inhabiting the bodies of young, unmarried women.

Mitchell was also linked to the deaths of three children: Otto Schmidt, age 12, Hiram Annas, age 16, and an unidentified nine year-old-boy who died after Mitchell grabbed him by the throat. 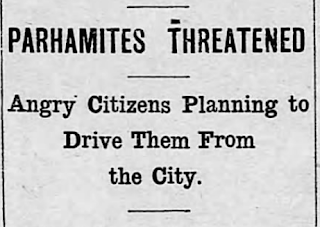 The city's undertaker also came under fire for his role in covering up the suspicious deaths. Benjamin Hopkins, a devout Parhamite, explained to authorities that "customs in Zion are different from those in the outside world". When asked why he failed to report the deaths to the county coroner, Hopkins explained that the dead had to be remained unburied for three days, in the even that they might resurrect themselves.

On November 15, 1907, Harold Mitchell was convicted of manslaughter. The other four Parhamities who assisted in the death of Letitia Greenhaulgh, including Mitchell's high priestess wife, were acquitted.

As for the cult's founder, Charles Fox Parham, his influence and reputation waned after the Parhamite murder spree. Some of the members, such as John G. Lake and F.F. Bosworth, fled Illinois and became notable religious figures in the Pentecostal movement. Parham continued preaching in spite of his declining health. He died in Texas in 1929 at the age of 55.