The Strange Prophecy of Benrose Billman 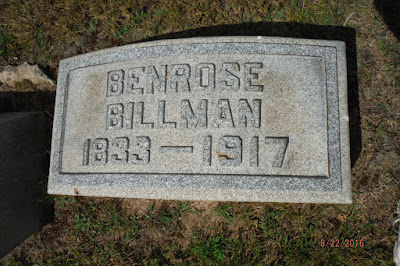 It was March of 1892 in the sleepy Ohio village of Doylestown, just south of Akron. The heart of the village was the hotel known as the Billman House, owned by Benrose Billman, who was a genial host and known throughout the village as an upstanding pillar of the local community.

A few weeks earlier Benrose Billman had undergone a severe sick spell, and, for several days, his life was in the balance. His health gradually improved and one day he was able to get out of bed and hobble around with the aid of a cane.

The office of the Billman House was the local hangout spot for the young men of the village, who gathered daily at the hotel to exchange gossip and check upon the health of the well-loved owner. It was on this particular March morning when Mr. Billman left his sick room and made his return to the hotel office, much to the delight of the crowd.

The crowd hanging out at the hotel that day consisted of John Mealy, William Busson, James Eitel, Fred Baysinger and Kent Young. All were strong, healthy men in the prime of their lives, and all were prominent businessmen of Doylestown. One of the members of the party made an offhand remark, which confused Mr. Billman: "It seems that Mr. Billman is going to beat us out of our proposed feast."

This caused the others to laugh and Mr. Billman demanded an explanation to the inside joke.

"Well, you see," one of the young men explained, "we've arranged a feast in your honor-- in case you didn't pull through."

To this, Benrose Billman replied:

"Boys, I'll be standing at the side of the hole when every one of you is lowered into the ground!"

When Billman made this remark it must have seemed ridiculous; the five young men were hale and hearty, while the old hotel proprietor's condition was still quite precarious. Yet Benrose Billman's frivolous prophecy came to pass exactly as he had said.

Less than a month after the comment was made, William Busson was suddenly stricken with inflammatory rheumatism and died in February of 1893. He was just 23 years of age.
Billman had recovered from his own illness just enough to attend the funeral.

On June 3, John Mealy died-- and it was Billman who made the funeral arrangements and prepared the body of the young man for burial.

On October 5, James Eitel passed away at the Billman House. Since the undertaker was out of town at the time, Billman took charge of the burial and used his carpentry skills to build the young man's coffin.

Fred Baysinger passed away on December 26, 1899, while at the South View House, after an illness of about two weeks.

The fifth and final member of the party, Kent Young, died in July of 1902 in Mt. Clemens, Michigan, at the age of 38.

As for Benrose Billman, he died in Doylestown on January 19, 1917, at the ripe old age of 83. According to his closest friends, until the day he died he blamed himself for bringing death to his five friends by way of an offhand remark.