The Unsolved Mystery of Fort Aubrey 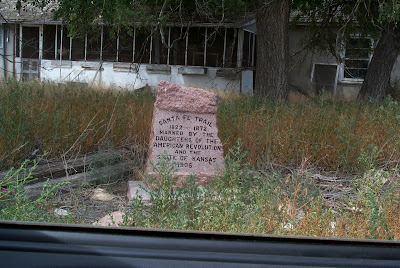 Out on the western plains of Kansas, a few indentations in the earth and a granite monument erected in 1906 are all that remains to mark the site of Fort Aubrey, a frontier post established by the U.S. Army more than 160 years ago to serve as the lone safe refuge for wagon trains traversing a lonesome 150-mile stretch of the Santa Fe Trail.

Fort Aubrey was also the site of one of the greatest unsolved mysteries in American history; it was here that a party of 22 militiamen from Missouri met their demise in December of 1863 for reasons that have never been discovered. Not only is the cause of the tragedy a mystery, but even the names of those 22 unfortunate soldiers have been lost to history-- if they were ever even known in the first place, that is.

What is known, however, is that army records pertaining to Fort Aubrey disappeared in either 1858 or 1859, and the outpost was presumably abandoned. It wasn't until May of 1864-- one year after the unexplained deaths of the Missouri militiamen-- that the location was re-opened by the army as Camp Wynkoop.

Since official records from Fort Aubrey are nonexistent, everything that is known about the incident has been handed down through local tradition, which was preserved by a Kansas historian named Helfrich, who had heard the story from R.T. Goans, who was a member of the party that buried the dead.

According to this local tradition, three companies of cavalry left Fort Leavenworth in the fall of 1863 to escort Governor Goodwin, of the Arizona Territory, to Fort Union in New Mexico. The men safely reached their destination but became separated on their way back, with one group of cavalry seeking shelter from a blizzard in the abandoned ruins of Fort Aubrey.

Official records from Fort Leavenworth confirm that the troops who had accompanied Goodwin made their departure on September 25, 1863, and these escorts were identified as troops from Companies A and H of the regular cavalry, and troops from Company I of the Fourth Missouri Militia. Records from the Arizona State Historical Society indicate that the party was led by Maj. James A. Phillips of Kansas, with Lieut. Peter Clark, Capt. John Butcher and Capt. Daniel Rice in charge of the companies. They reached Fort Union on November 9 and left two days later, encountering a massive snowstorm at Fort Lyons, Colorado, on November 23.

During this storm many horses were lost and several men suffered severe frostbite. All three companies remained at Fort Lyons for eight days. And from that day forward there are no more records of Company I of the Fourth Missouri Militia.

Helfrich, the local historian, surmised back in 1930 that a disagreement must have taken place at Fort Lyons, causing the Missourians to split from the party and the captain whose command they were under. In other words, it was more likely than not a case of desertion. Companies A and H reported at Fort Riley on December 23.

As for the unknown fate of Company I, it is believed that they reached the abandoned outpost of Fort Aubrey on or around the first of December, setting up camp in the ruins of the fort. The weather must have gone from bad to worse; charred fragments found at the site suggest they broke up their wagons and burned them for warmth. Whether or not this is what actually happened is open to debate, but the facts show that none of the wagons belonging to Company I were ever recovered.

Yet, when morning came, all 22 of the men were dead.

Perhaps the militiamen were attacked by Indians and their wagons and provisions stolen, causing them to freeze to death. The only thing that stands in the way of this theory is that none of the 22 bodies showed any signs of physical violence. There were no bruises or cuts, nor wounds from arrows, knives or bullets.

Another possibility is that the militiamen had succumbed to a sudden illness. However, it seems highly unlikely that each and every member of the group should perish within hours, if not minutes, of each other.

R.T. Goans, who helped bury the bodies, recalled that the company was made up exclusively of Frenchmen who were in the process of becoming naturalized citizens (France had controlled Louisiana and parts of Missouri until 1762, when the French ceded the territory to Spain after the signing of the Treaty of Fontainebleau).

Because of their immigrant status, no record of their names has ever been discovered, and with no living relatives in America, there was no way to identify the bodies.