An unsolved mystery of the Battle of Carthage 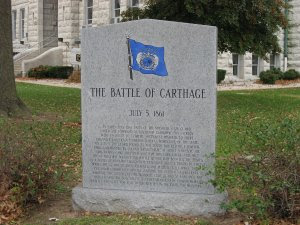 On July 5, 1861, the Battle of Carthage was fought in Jasper County, Missouri. While this battle is lesser known than Gettysburg or Antietam, it is of considerable historical importance, since it took place the day after President Lincoln invoked the power of war in his message to Congress.
Fought between the Union army and the State Guard of Missouri, the Battle of Carthage also marks the only time in American history that a sitting governor-- Claiborne F. Jackson-- led troops into battle against the United States. Surprisingly, the Missouri State Guard pulled out a victory, in spite of taking heavy casualties.

Over the next two years, several skirmishes would take place near Carthage in the federal government's attempt to prevent Missouri from seceding from the Union. It was one of these forgotten, historically insignificant skirmishes that led to one of the most bewildering mysteries of the Civil War.

Illinois contributed more than 250,000 soldiers to the Union Army during the war. One of these soldiers was a young man by the name of John Burrington, of Company D, 46th Illinois Infantry. How and where he met his demise is a matter of conjecture, because it appears that Private Burrington died twice-- once in training camp in Illinois, and once again on a battlefield in Carthage.

The perplexing mystery didn't come to light until September of 1900 when C.J. Niehardt, a farmer from South Carthage, was plowing his field. After his plow struck a heavy object buried in the earth, Niehardt bent down to investigate. The object his plow had struck was a small gravestone with two strange inscriptions. On one side the inscription read:

On the other side of the stone was an inscription reading, "A, B, C, D, E, F, G," along with a carving of a pair of clasped hands below the letters.

The farmer's find created considerable confusion; the only major fighting that had occurred in the vicinity was the first Battle of Carthage on July, 5, 1861, which saw 44 Union troops killed, and the second Battle of Carthage in October of 1863-- a minor confrontation that resulted in zero Union casualties. There was no record of a John Burrington participating in any of these conflicts.
Yet there had been handfuls of minor skirmishes in the time between these two battles. It would appear that Pvt. Burrington was just a young soldier who had been in the wrong place at the wrong time, and a small marker had been erected at the site where he had fallen.

But then a remarkable discovery was made by a Carthage woman. Mrs. E.J. Krieder had not only been born and raised in Illinois, but she also had a brother who had fought in the same infantry regiment. She also had in her possession a roster of the 46th Illinois Infantry, which stated that John Burrington did indeed belong to Company D. But the official roster showed that he died in Amboy, Illinois, on April 2, 1862, and was buried there.

The report of the curious tombstone reached Kansas, where it caught the attention of Col. R. Dornblaser in Fredonia. Col. Dornblaser was the man who had commanded the 46th Illinois regiment during the war, and he wrote a letter back to the newspaper in Missouri that had initially reported the discovery of Burrington's grave:

"John Burrington enlisted in my regiment at Amboy, Illinois, on Nov. 10, 1861, and died at Amboy, June 6, 1862, thus living only eight months after he enlisted. It is to be presumed that, as John Burrington died at Amboy, he was buried there. It is therefore a great mystery, which I would like to have solved, how came the headstone of his grave to be found at Carthage."

The mystery presents several possibilities, none of which have any satisfactory explanation:

2. Burrington died in Illinois, but his gravemarker was stolen by a person or persons unknown, and taken more than 500 miles away to Carthage, Missouri, for some inexplicable reason.

3. Burrington's initial death in Illinois was misreported, and he was really killed in action in Carthage during a skirmish in 1862. But what are the odds that the soldier's death would be misreported- by army officials nonetheless-- not once, but twice?

4. Burrington died in Illinois in either April or June of 1862 and another soldier, perhaps a fugitive from the law, stole his identity. This "fake" John Burrington was later killed in Carthage and buried on Niehardt's farm.

5. The soldier who died in Carthage was not really John Burrington, but some other member of the 46th Illinois Infantry, and it was a case of mistaken identity.

In all likelihood, the true fate of Private Burrington-- and the true location of his final resting place-- will probably never be known.