Satanic Tonic: How the Prince of Darkness Made Snakeoil Inventors Rich

For as I long as I can remember I've always had a fascination with patent medicine. Over the years I've collected hundreds of antique bottles and advertising posters from patent medicine manufacturers, whose products claimed to cure every old-timey disease from scrofula and dropsy to apoplexy and biliousness.

Of all the forgotten remedies and cures peddled by snakeoil manufacturers of the 19th and early 20th centuries, a special place in my heart is reserved for Sa-Tan-Ic Tonic, which promised to cure virtually every "stomach, kidney and liver complaint". Of course, since I'm also fascinated by demonology and the bizarre (hence the name of this website), what I really love is the advertising, which featured an enormous devil in his underwear (I think) trampling the earth. 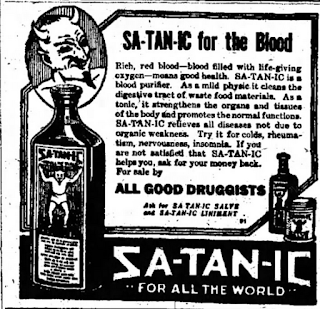 We could spend all day discussing this aspect of Sa-Tan-Ic Tonic alone, since it raises so many questions. This must have seemed like a bold advertising gamble back in the early 20th century, when millions of Americans attended religious revivals and Bible camp meetings and most folks considered themselves good, decent Christians. You might be tempted to think that such an advertising campaign would be a terrible idea... almost as bad as Lady Doritos. But you'd be wrong. The product was a smashing success, and the creators of Sa-Tan-Ic Tonic became quite rich.

The Sa-Tan-Ic Medicine and Manufacturing Company was based out of Wichita, Kansas, and was established in the spring of 1915 by two druggists, W.W. Daniels and B.A. McGaugh. The two men already owned a thriving business, the Gehring Pharmacy, at 104 W. Douglas Ave., but Daniels and McGaugh noticed that there was a need for a product that could clean the bowels gently, unlike the harsh and potentially deadly laxatives of the era.

From this idea Sa-Tan-Ic Tonic was born. Sold under the name Satanic Tonic at first, its inventors had a difficult time keeping it on the shelves of the Gehring Pharmacy. They set up a massive display featuring six hundred bottles and offered a money-back guarantee to any customer who found the product unsatisfactory. The bottles sold quickly, with only one out of six hundred customers asking for a refund. 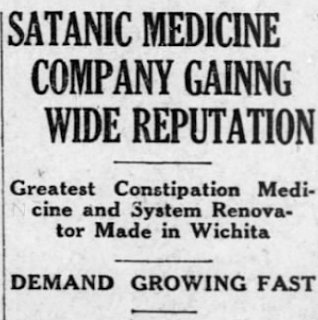 Demand was so high that Daniels and McGaugh quit their day jobs in order to manufacture their tonic full time. Armed with $50,000 from investors and lenders, the two druggists rented out the Butts Building in downtown Wichita and set up an office and a laboratory. They also hired two full-time salesmen as well as a chemist, W.O. Backman, formerly of the Southwest Drug Company. 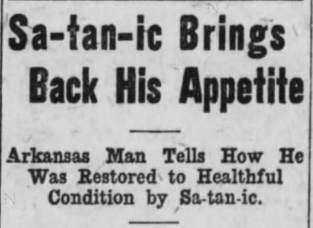 But the turning point for the Sa-Tan-Ic Medicine and Manufacturing Company came when they struck up a business relationship with a Wichita printer named W.G. Smith, who was the owner of the Smith-Hobson Printing Company. Smith traded his printing plant to Daniels and McGough for stock in the company, and entered into a contract whereby he would have complete control over the printing of all Sa-Tan-Ic labels and advertising materials. The brand's distinctive packaging was W.G. Smith's brainchild. 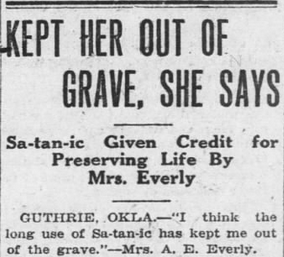 Initially, the manufacturer sold just one product, a purifying tonic designed to cure stomach ailments, and this tonic was advertised heavily in Kansas newspapers. The following year, the manufacturer perfected and then trademarked its logo, and from that point on Sa-Tan-Ic became a household name throughout most of the Bible-thumping Midwest. Before long, Sa-Tan-Ic Medicine and Manufacturing Company expanded its offerings to include all sorts of salves and liniments, in addition to the original tonic. By 1919, Sa-Tan-Ic products could be found in most drugstores throughout the Unites States, and a contract with a drug company brought the popular remedy to pharmacies in Mexico. 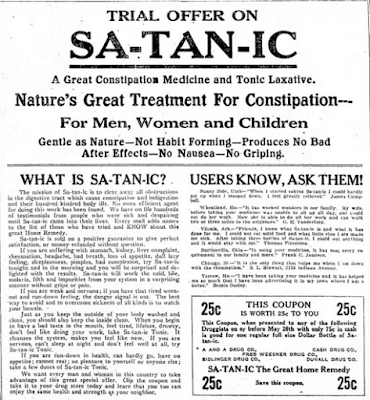 It seemed that Sa-Tan-Ic was poised to conquer the world, which explains the evolution of the devilish logo. The original logo portrayed the Prince of Darkness as a sort of dapper gentleman. But, as the brand grew, the logo was changed in order to reflect the company's growing dominance in the heavily-saturated patent medicine market. Satan went from a well-dressed chap to something resembling a professional wrestler or bare-knuckled boxer in swimming trunks perched atop the globe. His stance almost suggests that His Unholy Majesty is ready to lunge at you and get you into a full Nelson or a tilt-a-whirl arm drag. Around this time, the phrase "For All the World" appeared in several ads, hinting at the company's global ambitions. 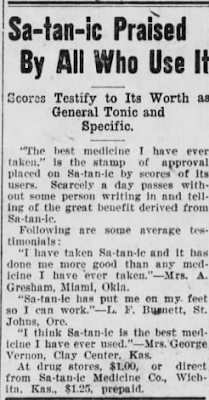 Before long, the Sa-Tan-Ic Medicine and Manufacturing Company had expanded its offerings to include a heavy-duty cleaner for mechanics, miners, painters and other blue-collar workers as well as Sa-Tan-Ic Gas Saver, a fuel additive that promised to give cars more power and speed, and to improve mileage by up to 40%.

As the FDA began cracking down on the manufacturers of patent medicines in the 1920s, business began to decline, but not before Daniels and McGaugh had become multi-millionaires.

As late as 1933, advertisements for the Sa-Tan-Ic Medicine and Manufacturing Company continued to appear in Kansas newspapers, though the brand's glory days were long gone. Today, there are very few alive who can still recall the demonic tonic and its distinctive packaging, though there just might be a bottle of Sa-Tan-Ic gathering dust in your local antique shop.