Doctor Strope and the House of the Green Shutters 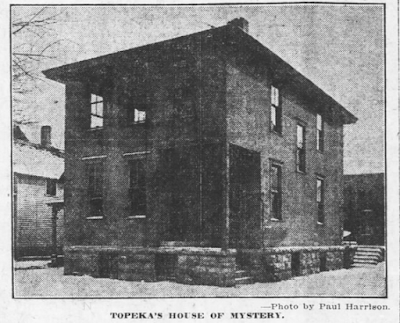 During the early 20th century in Topeka, Kansas, many fantastic tales were told about the infamous "House of the Green Shutters", which stood on 10th Avenue near the site of the long-defunct Bethany College (later known as Vail College). Strange tales of ghosts, hidden tunnels and secret passages are connected with this house, which was also known to Topeka locals as "The Crazy House".

The house, a dark colored stucco structure built close to the sidewalk, was said to have been built during the time of Civil War by a woman who was a Confederate sympathizer, and its unusual architecture was designed to aid in the escape of fugitives. At the time of the war, the windows were surrounded by iron bars, and the interior featured several secret passageways, hidden compartments and well-concealed peep-holes. One popular rumor was that the woman who built the house lived in constant terror of an unseen enemy, and constructed the tunnels and hidden passages so that she would never be trapped inside her own home without a means of escape.

In reality, the peculiar House of the Green Shutters was not built by a female Southern sympathizer during the Civil War, but in the 1890s by an eccentric female physician, Doctor Strope. As it turns out, the real-life story of Doctor Strope is every bit as bizarre as the mysterious house itself.
Strope planned and oversaw every aspect of the house's construction, and, according to some sources, paid the workers daily by making them stand in line while she distributed coins from a china bowl.

Strope, apparently, also demanded that she have the ability to look into each room through a peep-hole. According to one story, she became irate during construction when she discovered that she couldn't peek into one of the rooms. Although construction was nearly complete, the furious physician ordered the floor torn up and every wall torn down-- the workers had to start all over again. 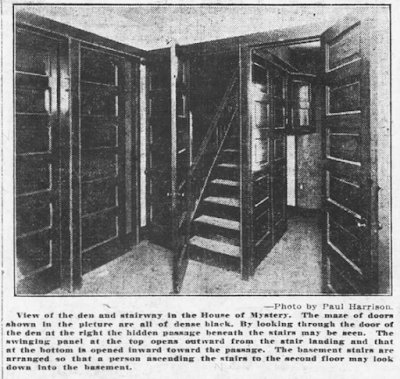 Because Doctor Strope was so eccentric, it didn't take long for stories of her bizarre behavior to spread throughout Topeka. The peep-holes, it was said, were put there so that Strope could keep an eye on her servants, making sure they were doing their jobs and not stealing anything.

Strope was also a religious and self-righteous woman, and she said her prayers before sunrise each morning in a loud voice with the windows open. She was later arrested for disturbing the peace, after shouting a prayer that went something like, "John Jones is an awful liar. Please help him to overcome this grievous fault." During her trial she quoted Bible verses to the judge and she was released. She then demanded that the same police officers who brought her to court transport her back home (it is unclear whether or not the judge catered to her demand).

Another interesting feature of the property was a well that had been dug 250 feet into the earth. Doctor Strope claimed that the waters from this well held miraculous healing powers and for many years a large sign was displayed at the well, reading, "Free Medicine for God's Poor". There is also credible evidence indicating that a tunnel once ran from the house's cellar to a barn that once stood on the property. The barn, at one time, had been used as a sanitorium to house Doctor Strope's patients. 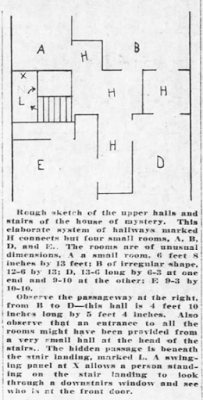 For one reason or another Doctor Strope moved away, never to be heard from again, and the House of the Green Shutters was occupied by a seemingly endless stream of tenants, none of which stayed around too long. One of these occupants gave rise to the legend of the "Woman in the Black Veil".

This mysterious woman was brought to the house by an elderly, feeble man who used to live there alone. She showed up suddenly one day and was seen constantly around town, on the streets selling scarves and embroideries that she had made. She always wore a dark veil so impenetrable that it concealed all of her features. She would never remove the veil, reveal her name, or reveal what her relationship was to the old man. Some said that she wore the veil because she had been horribly disfigured in some sort of accident. Then, one day, she disappeared as suddenly as she had arrived.

After the old man died in the early 1900s, the house fell into disrepair and ruin, and tales about the ghost of the "Woman in the Black Veil" persisted for decades. One newspaper article from 1916 relates the story of two boys who explored the vacant house, only to be scared away when the windows began to open and close all by themselves.

It is unclear when the "Crazy House" on 10th Avenue was finally torn down, but the city of Topeka lost one of its strangest landmarks with the razing of Doctor Strope's unusual home.