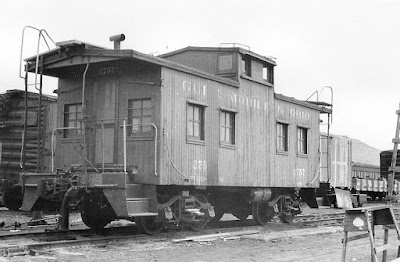 "Did you ever notice that you really don't see too many cabooses anymore?" a friend said to me a few years ago. Truthfully, it was something I had never noticed, at least not until my recent move to a railroad town, where I can sit on my deck and watch freight trains roll by at all hours of the morning, afternoon and evening. And after watching countless trains I concluded that my friend was right-- you really don't see too many cabooses these days.

There's a certain sadness about this, I guess, because the caboose holds a special place in many of our hearts. With its cupola, toolshed shape and tiny back porch, it is undeniably the most charming of all railcars (which probably explains why so many old cabooses have been reborn as gift shops, motel rooms and vacation cottages). Even the name is charming, though it is derived from the Low German word "kabhuse", referring to a wooden cabin on a ship's deck.

The decline of the caboose began in the 1980s when new technologies, such as electronic EOT (end-of-train) devices, rendered cabooses obsolete. Today, CSX is the only major railroad that still uses cabooses on a regular basis.

However, since the caboose played an important role in railroading history for more than a century, it is no surprise that there are so many interesting stories that have been written about them, and some of these stories are downright spooky. Here are some fascinating "haunted caboose" stories I've been able to uncover.

The Caboose That Ran Away

In 1898 the Topeka State Journal reported that "1908", the number of a caboose owned by the Louisville & Nashville Railroad, rolled uphill, went over an embankment and into a field... all by itself... even though the brakes had been set! 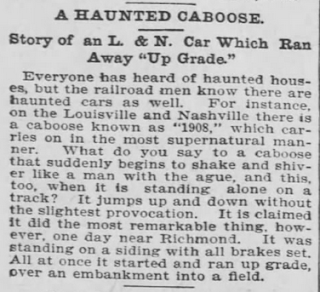 But the story of "Old 1908" doesn't stop there; its mysterious antics continued for well over a decade. According to L&N employees, the caboose had once been in a wreck. Although no one suffered any injuries, "1908" was badly damaged. After being repaired it was put back into service, and that's when it began to do strange things. One report from Kentucky in March of 1910 describes this bizarre incident near Lexington: 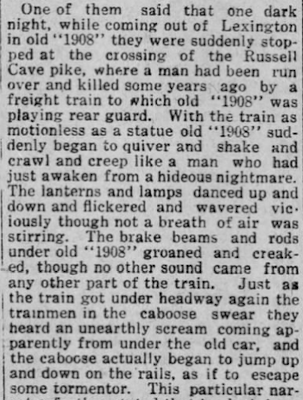 In 1903, conductor Frank Correl and brakeman Tome Rowe of the Santa Fe Railroad heard someone rapping on the outside of the caboose as their train passed through Garnett, Kansas... right at the spot on the tracks where a fellow railroader had recently been killed. 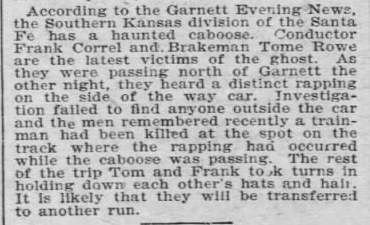 Caboose Haunted by Ghost of Woman

In 1888, conductor J.H. Riley of the O.C. & S.W. Railroad of Kentucky claimed that his train's caboose was haunted frequently by the apparition of a young, slender woman in a broad-brimmed hat. The ghost, which would remain visible for hours until someone made an attempt to approach it, was reportedly seen by every railroad employee and several residents of Rockford. 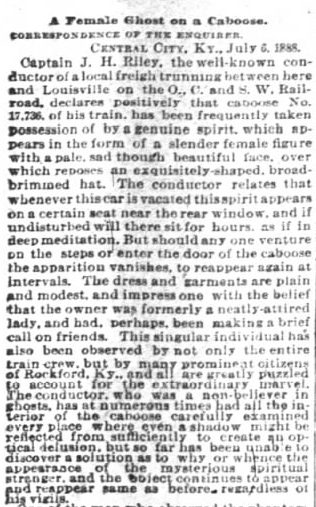 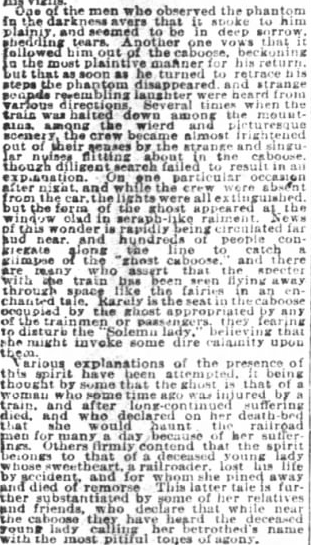 Dead Brakeman on Top of Caboose

On August 12, 1888, H. Gilmore was conductor of the No. 2 train of the Sonoma Railroad in Mexico when a sudden jolt near Imuris caused brakeman Frank Urquidez to fall between the cars. He was cut to pieces. After gathering up what was left of his remains and turning them over to Mexican authorities, the train proceeded to Santa Ana. And that's when things really began to get weird. 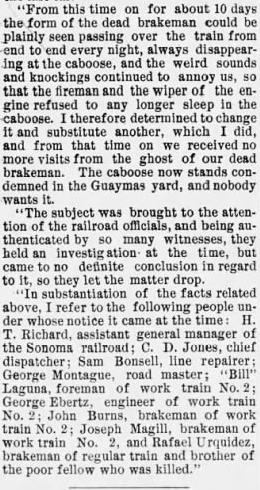