The Mystery of Aaron Burr's Grave 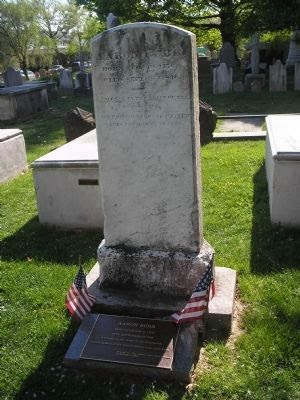 Aaron Burr, one of the most infamous political figures in American history, is best remembered not for serving as Vice President under Thomas Jefferson, but for shooting political rival Alexander Hamilton in a duel in 1804.

Although the duel was illegal, Burr never faced trial for killing Hamilton (all charges against him were dropped). Nonetheless, the duel put an end to Burr's political career and controversy followed him everywhere he went for the rest of his life. Three years after the duel Burr was arrested for treason, and he was accused of conspiring with General James Wilkinson and other military leaders to establish an independent country carved out of parts of Texas and Mexico.

Burr was eventually acquitted of these charges, but his reputation never recovered. He lost his fortune in a series of bad business deals and was so broke that he fled to Europe in order to escape from his creditors. From 1808 to 1812 Burr lived in exile in England, until the British Empire forced him to leave. He attempted to go to France, but Napoleon Bonaparte turned him away. Disgraced, he returned to New York, but he was so reviled by the American public that he had to resort to using a fake last name.

In 1833, the 77-year-old former Vice President married a wealthy widow named Eliza Jumel. They lived together at the lavish Morris-Jumel Mansion in Manhattan, but the relationship soured when it became clear to Eliza that Burr was squandering her fortune on bad land speculation deals. Even worse, Burr's numerous enemies were spreading nasty rumors about Eliza; some newspapers claimed that Eliza had been a child prostitute, while others claimed that she had actually poisoned her first husband, wealthy merchant Stephen Jumel. After four months of marriage, Eliza Jumel and Aaron Burr separated (Eliza, perhaps out of spite, hired Alexander Hamilton's son to be her divorce lawyer).
Sadly, the nasty rumors followed Eliza for the remainder of her life, and she eventually went mad. She died in 1895 at the age of 90.

As for Burr, he suffered a debilitating stroke in 1834 which left him partially paralyzed. Having lost all his friends, money and influence, he died a pauper in a filthy boardinghouse in the Staten Island village of Port Richmond on September 14, 1836. Coincidentally, it was also the very same day that his divorce from Eliza was finalized.

And this brings us to the point of the story-- the mystery of Aaron Burr's grave.

Burr was buried alongside his father at Princeton Cemetery in a grave that remained unmarked for more than two years. During that time occasional efforts were made to erect a suitable monument to mark Burr's final resting place, but these efforts invariably met with failure.

But then, one day, a gravemarker suddenly marked Burr's final resting place. It was a small yet expensive monument of New England granite and Italian marble. But who put it there has been a mystery that has evaded explanation for 180 years.

"No one in the house saw the monument erected or knew or knows anthing whatever respecting it. Nor was there any stonecutter in the vicinity competent to execute such a piece of work. No relative of Aaron Burr nor any of my numerous informants explains the mystery. The person who did the pious deed is known, however, and lives. Need I say that to woman's hand Burr owes the stone that commemorates his name?"

While Parton's words seem to hint that Eliza Jumel may have been the person who paid for Burr's tombstone, other historians refute this theory. The common consensus among modern-day historians is that the marker was paid for by one of Burr's relatives, Jonathan Edwards. But, if this was the case, why did he wait more than two years to do it? Contemporary records also indicate that the once-prosperous Edwards family was, at the time of Burr's death, in "reduced circumstances". In all likelihood, it seems unlikely that the Edwards family had the funds to purchase a slab of Italian marble and have it engraved (my own research has turned up no written mention of Edwards purchasing the monument prior to Parton's 1857 biography, Life and Times of Aaron Burr).

Today, there are proponents of both theories, but no evidence has ever been found to settle the matter conclusively.
Aaron Burr Eliza Jumel Strange History unsolved mysteries