After more than a century, photo of 'Fish Creek Ghost' still defies explanation 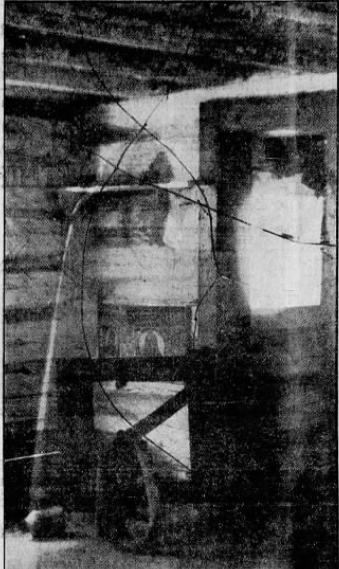 In March of 1915, Montana outdoorsman Burt Duckworth set out to prove the existence of the Fish Creek Ghost once and for all. Accompanied by several witnesses and an amateur photographer, Duckworth's party traveled to an abandoned cabin approximately forty-seven miles west of Missoula, near the village of Rivulet. The cabin, said to be haunted by the apparition of a weeping woman, had already been the talk of Missoula for several years, but after Duckworth published a photo of the alleged apparition, the legend of the Fish Creek Ghost spread to every corner of the state. However, to this day, no satisfactory explanation for the strange photograph has ever been given.

Was Duckworth's ghost picture a hoax or the real thing? Here is the complete history of the haunting, so that you may decide for yourself.

For several years, workers on the Northern Pacific Railroad had been telling stories about the ghost. Two such witnesses, Ed Healy and N.E. Haskins, claimed that they first encountered the apparition one night in August of 1913 while on the tracks between Cyr ad the Fish Creek bridge, in the form of a weeping woman roaming the hillside in a white dress. The same men encountered the ghost again during a camping trip in September, near the abandoned cabin.

By early 1915, rumors of the haunted cabin in the mountain wilderness between Rock Creek and Fish Creek had reached the city of Missoula, and on the Sunday morning of January 17 a group of sturdy railroading men, consisting of Ed Rendleman, W.E. Fuge and "Red" Alberts, met at Louis Kennedy's clothing emporium to discuss an expedition to the site. Rendleman, described by local papers as "six foot one and burly as a prizefighter" was chosen to lead the ghost-hunting expedition.

On Saturday, January 23, the three men got off the train at the Rivulet station of the Northern Pacific Railroad and interrogated the operator of the station, Miss Bertha Luckey. Miss Luckey informed the men that she-- and everyone else in the vicinity-- was well acquainted with the ghost story and gave them directions to the cabin if they dared to visit. Miss Luckey warned the group that, two weeks earlier, she had given the same directions to two rugged hunters from Wallace, who visited the cabin in broad daylight. Later that afternoon, the two hunters boarded the train at Rivulet with such haste that they left their guns and supplies behind. "I'm not sure what the world record for two and a half miles is," said Miss Luckey, "but those hunters from Wallace set it, and it will hold for centuries."

Undaunted, the Rendleman party set out for the cabin, but not before placing a copy of their wills in a safe deposit box at the Rivulet post office. Based upon the information they had gleaned from Bertha Luckey, the cabin had been built decades earlier by a timber claimant named Gossage. How or why he left nobody remembered, but the cabin had stood deserted ever since.

When the party reached a small stream about ten yards from the cabin, Red Alberts refilled his canteen. "There were no tracks in the snow," Alberts said after the expedition. "The snow was deep and soft. I bent over the stream with my can, and to my amazement, saw 12 or 15 clots of fresh blood on the snow on the bank. I thought my nose was bleeding... I wiped my face, but there was no blood." Alberts said that he called his companions to come over and take a look, but when they arrived at the scene, the blood had mysteriously vanished.

After the men entered the cabin they cooked supper in the kitchen and settled themselves in a corner of the living room, waiting with their loaded rifles. Hours passed and darkness came; Fuge and Alberts dozed off. "I was awakened by Rendleman pinching my knee," recalled Alberts. "He said nothing, but pointed. All I saw was a human face with tearful, staring eyes. If the face had a body, I did not get it. The face was in the doorway leading from the bedroom. I saw it distinctly. It was a woman's face."

Ed Rendleman gave his account of what he saw. "I plainly saw a woman," he stated. "She was dressed in a bridal gown, new, of light silk. She was crying. She came out of the bedroom and stood in the door... The woman stood there about 30 seconds, then crossed the room to the window at our left and disappeared. She was no more than eight or nine feet from us... We made no effort to seize the apparition." W.E. Fuge, who had slept through the ghost's appearance, said that he believed Rendleman and Alberts had dreamed the whole thing.


Back in Missoula, the story of the Rendleman expedition captured the interest of Burt Duckworth, a well-known citizen and amateur photographer. He believed that, if the ghost bride really did exist, he could capture her on film. "The camera will go about this business without fear or favor," Duckworth told a local reporter. "A photographic machine cannot hypnotize itself, it cannot be influenced by ghostly surroundings. It tells the truth, no matter the circumstances."

The story also caught the attention of Dr. Thaddeus Bolton of the University of Montana, who challenged members of the Rendleman party and other witnesses to a debate of sorts, to be held at Louis Kennedy's store on Saturday, January 30. As head of the university's psychology department, he was confident that science could explain the spooky phenomena at Fish Creek. Although the store was packed for what very well could have been the first paranormal conference in Montana history, Rendleman, Alberts and Fuge refused to attend.

Burt Duckworth, however, was incensed that he had not been invited to the symposium. He was so angry about being snubbed that he actually wrote a letter to the editor of The Missoulian blasting the paper and calling Dr. Bolton's credentials into question. He had also been bothered by the newspaper's intimation that the only people who claimed to have seen the Fish Creek ghost were men who had been fired by the Northern Pacific Railroad. Some of the more "rational" citizens of Missoula believed that the whole story was nothing more than a ploy by disgruntled former employees intended to scare away would-be passengers.

On Wednesday morning, January 27, Duckworth set out for the cabin with four other men: Ray Hall, Harry Byrd, Ellis Rathburn and a landscape photographer named Ralph Cuplin. They reached the cabin around 3:30 and explored the outbuildings. At around 10:30 in the evening, the party made their beds on the floor of the shack and went to sleep. 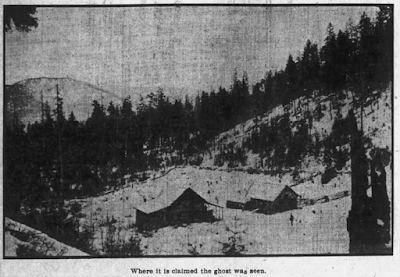 At 3:15 in the morning the group was jolted from their sleep by Ellis Rathburn, who, scared out of his mind, jumped over Byrd and Hall, knocking over and breaking the group's best camera as he fled from the cabin. Duckworth looked up and saw the weeping woman for a brief moment before it disappeared. Cuplin, according to Duckworth's report, had enough presence of mind to snap a quick photo, which seems to show the faint outline of a female figure in a long gown, with a hood concealing the features.

Cuplin's photograph of the Fish Creek ghost created a huge sensation throughout Montana, though some suspected that it was a hoax. The following day, the staff photographer of The Missoulian attempted to re-create the Cuplin photograph, and claimed that the trickery had been achieved through double exposure. However, the fake ghost pictures taken by the newspaper photographer seem to possess the trademark qualities of "spirit photography" of the day, whereas Cuplin's picture does not.

At any rate, the professional photographers who attempted to prove hoaxery by re-creating the Cuplin photo seem to have overshot their intended goal; their re-creations look, well, too good to be true, like the works of famous spirit photographer William Mumler. The outlines are too crisp, the folds in the clothing too detailed. Of course, they were not amateur landscape photographers stuck with a cheap, inferior backup camera like Cuplin. Until the day they died, however, Duckworth and Cuplin maintained that their photo was the genuine article.

As for Dr. Thaddeus Bolton, even he came around on the matter of the existence of ghosts-- eventually going overboard on the subject. During the famous 1922 "Night of 38 Fires" episode at the farm of Alexander MacDonald in Antigonish, Nova Scotia, Bolton (who was now at Temple University) went so far as to claim that the 16-year-old girl at the heart of the story, Mary Ellen MacDonald (who was adopted by the MacDonald family in 1910), had actually been born and raised at the cabin near Fish Creek, and that the Fire-Spook of Antigonish and the Weeping Woman of Fish Creek were one and the same. This claim was so outlandish that it practically ruined Dr. Bolton's career.

While it is uncertain when the cabin near Fish Creek finally rotted away and the last sighting of the apparition took place, the haunting made an indelible mark in Rivulet history; maps of the area where the cabin once stood still identify the spot as Weeping Woman Gulch.