Established in 1836 and named for early settler Joseph Bertrand, the rural township of Bertrand in Berrien County, Michigan, is home to many people of French Canadian and Native American ancestry. Undoubtedly, there are those living in Bertrand Township who, if they trace their family trees back far enough, may be surprised to discover that they share common ancestors with Pierre and Rose, two young lovers whose spirits are said to haunt the local graveyard.

According to local folklore, shortly before the St. Joseph Mission was abandoned in 1855 (built on the site of an earlier Jesuit mission established by a priest named Father Allouezin in 1690) there was a young French Canadian settler named Pierre Snydam who divorced his wife, Rose, after three unhappy years of marriage. Rose found her husband to be something of an insensitive brute, while Pierre was jealous of his wife's friendliness toward the local Indians, and toward a Potawatomi brave in particular named Gray Eagle.

On their way back from the courthouse, after having agreed to the terms of the divorce, Pierre and his former flame decided to take a shortcut by walking through the St. Joseph Mission graveyard. They began examining the ancient gravestones, many of which had epitaphs written in French, and were delighted to discover the grave marker belonging to Madeleine Mona Mouta Nona, the daughter of a Potawatomi chief and wife of Joseph Bertrand. Although she died in 1846, Madeleine's grave marker has been lovingly maintained and its inscriptions can still be read clearly today (an interesting side note: the reason why the name 'Ellen' appears on Madeleine Bertand's grave is the result of a miscommunication between Joseph Betrand, whose native language was French, and the monument maker, who, presumably, only spoke English).

As the story goes, Rose and Pierre were so engrossed with reading the epitaphs that, before they knew it, twilight had descended upon them. The moon came up as the divorced couple carefully and slowly walked among the graves. Pierre looked up at the stained glass windows of the adjacent church and the way that the moonlight gleamed against the colorful glass made him nostalgic for happier times; before he knew it, he and his wife were holding hands. But then, as they drew closer to the old church, something strange caught their attention-- they saw a large congregation of dark human figures entering the church. This struck them as bizarre, as it seemed to them impossible that such a large number of people could fit into such a tiny building. They were curious to find out what sort of ceremony was taking place at such an odd hour, so they went inside.

The Snydams were taken aback at what they saw. Numerous candles were burning, casting flickering shadows on the faces of the congregation, comprised of Indians and whites alike worshiping together in perfect harmony. At the altar stood a Jesuit priest, flanked by Indian acolytes, leading the congregation in song. The scene was so touching that Rose and Pierre fell to their knees and prayed with closed eyes to God for forgiveness of their sins, and for the strength to rebuild and restore their crumbling marriage.

When they opened their eyes, they were startled to discover that the congregation had vanished completely. All that was left was the old Jesuit priest, who passed them in the aisle, whispering pax vobiscum-- "peace be with you"-- as he touched them gently on the shoulder. Like the others, he, too, disappeared into thin air.

Pierre and Rose stood up and kissed each other passionately, vowing to never again extinguish the love that burned in their hearts. But, unbeknownst to the young lovers, there had been an unseen witness to the phantom mass, the jealous Potawatomi named Gray Eagle, who had been secretly in love with Rose since the first day he laid eyes upon her. Gray Eagle had bided his time for months, waiting for Rose and Pierre's marriage to fall apart. Then, when he was certain that she was over Pierre, he would swoop in and whisk Rose off of her lovely feet. From his perch high upon the bluff overlooking the St. Joseph River, concealed in the groves of oak, he had watched the couple strolling through the graveyard. When he saw them leaving the church holding hands, and still very much in love, he seethed in rage.

A few weeks later the bloodied bodies of Rose and Pierre were were found on the high bluff above the graveyard. The cold, lifeless body of Gray Eagle was discovered a few yards away, with the handle of a knife protruding from his heart. It seemed that the jealous Indian had murdered the couple before taking his own life. All three were buried in the cemetery in adjoining graves, destined to spend eternity as neighbors. From that time forward residents of Bertrand refused to walk past the graveyard at night, claiming that they had seen their ghosts hovering above the mists. Some even claimed to have been chased by them. Still others claimed to have seen the phantom congregation entering the dilapidated, abandoned mission to the strains of ethereal music. 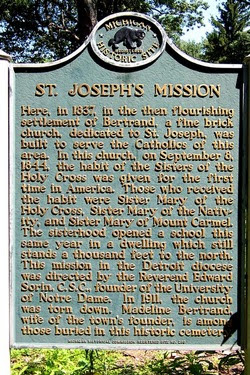 Although the church was eventually torn down in 1911, a historical marker near the graveyard denotes the site where it had once stood. Unfortunately, time and the elements have rendered the grave markers of Pierre, Rose and Gray Eagle illegible. Perhaps now, with the passage of time, their troubled spirits are finally at peace.
ghost stories haunted places Michigan Native Americans