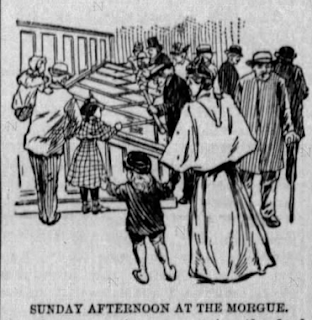 Few institutions in 19th century America were as fascinating as the city morgue. In virtually every major city, the morgue was thronged with visitors on weekends, and the crowds were comprised of people from all walks of life. Some were there to identify the remains of loved ones, but most were there merely for entertainment. For instance, in one article from an 1897 newspaper, a reporter vividly describes the scene at Chicago's city morgue on a Sunday:

"While the deputy coroner was speaking, a bevy of damsels not to exceed 14 years of age, neatly dressed and bright looking, stole quietly into the room. They trod on tiptoe and spoke in whispers, yet they made the round and looked in turn on the face of every body in the boxes."

According to this particular reporter, the Chicago morgue entertained over 1,000 guests on the day of his visit, and the spectators ranged from mothers with young children to couples on their first date. While this may seem like a rather morbid way to pass the time today, it is a well-known fact that people of the Victorian Era had a deep and peculiar fascination with death; therefore, a weekend visit to the city morgue was no stranger than going to the movies or a museum. 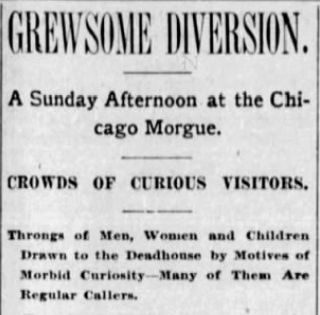 The men employed as morgue-keepers during this era were often happy to chat with visitors and journalists alike, and were always quick to share stories about the strange experiences they have had while working in the City of the Dead. In 1898 the morgue-keeper of the Chicago morgue, Bill Clark, related the following strange story about the headless corpse of a young woman named Marie Grignovitz. The following is an excerpt from the original newspaper article.


The other night he told a strange tale about the headless peregrinations of the body of Marie Grignovitz, which the police found floating in a box in the Chicago River just north of the forks. The corpse was that of a girl of 18 or thereabouts and, though it was maimed and hacked with knives, traces of its unusual beauty remained perceptible to the most unobservant of the hundreds who were attracted by the curiosity or duty to view the body.

It was nude when found and the absence of the head seemed to add an insuperable obstacle to the difficulties of identification. Officials despaired andeventhe most ardent of new-fledged reporters butted their heads in vain against this stone wall of mystery. Everyone had given up hope and it had been determined to inter the poor headless corpse the next day when, strangely enough, out of nowhere, unheralded and by a route unknown, the head appeared at the morgue, exciting the wonder of all and the superstitious fears of thousands.

"I never did know how that head came to rejoin its body, and I don't suppose I ever will," said Clark, "but what I do know is just this-- I was on guard at the old morgue that night. There might have been three or four bodies on the slabs, I can't exactly say, one of them being, of course, this headless girl Grignovitz. There had been a good many visitors early, but after awhile things got quiet. Midnight came on and I sort of made myself comfortable in a tilted chair and, with a bit of a pipe, leaned back thinking.

"It may be my eyes closed for just a second or so, but, anyway, a quick rush of fresh air and the shutting of the door sent me on to my feet with a start. I glanced around quickly and ran to the door and looked out. No one was in sight except that I heard a bell tolling midnight. Then I stepped back indoors, feeling a bit queer somehow. I turned up the lights and the first thing I saw was that the body of the headless girl was gone. The naked slab lay there before me, but its late occupant had vanished as entirely as if she had become a spirit of air.

"Well, now, I needn't assure you this took my breath away completely. All the time I knew the body hadn't been stolen or hadn't disappeared by natural means. There wasn't any telephones in those days and I could do nothing by leaving the morgue, so I sat down in my chair again, feeling a little shivery. I'd been there about a minute, I guess, when I felt the same peculiar rush of damp air over my legs and I knew the door was open again. Soft footsteps came toward me. I didn't dare raise my eyes, but the tail of my glance fell on the floor and I saw stalk past me the wet, naked feet of a woman. Then I sank down in my chair and closed my eyes with my hands."

The old man stopped and with great deliberation filled his pipe from a canvas sack.

"Well," said Clark, slowly, "just then the sergeant came in and together we went over to where the bodies lay. Lying on the breast of the headless girl, with her two hands holding it, was the stony, staring-eyed head she had lost, with its long yellow hair all dabbled in blood. The lips were parted and the white teeth were clenched upon a bit of parchment. It had red letters printed on it, printed in English capitals, which said:

'This Is the Head of Marie Grignovitz, Traitor.'

"And we never found out a single thing more about the matter," concluded Clark. Nor could we persuade him to add a word more to what he had said.