The Paranormal Experiences of Jesse James 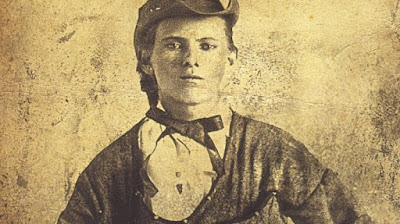 Born in Missouri in 1847, Jesse James earned his reputation as the quintessential American outlaw in the years following the Civil War. Jesse, along with his brother Frank, robbed banks and trains across the Midwest until their exploits turned them into national icons; Hollywood has produced more than twenty feature films portraying Jesse James, and countless books have been written about Jesse, Frank, and other members of the infamous James-Younger Gang.

Few people, however, are aware of the paranormal experiences of Jesse James, such as the apparition of a phantom horseman who stalked Jesse for several years during his fabled campaign of crime.
The story of the phantom horseman was first related by Frank James in 1882, while in jail at Independence, Missouri, awaiting trial for the gang's robbery of the Rock Island Line train. During his three-week-long stay in the Independence jail, Frank shared a cell with Orth Harper Stein, a journalist-turned-train robber, con man and murderer whose own life story is every bit as remarkable as that of the James brothers.

Like many cellmates, Stein and James passed the time by telling stories of their illustrious criminal careers. During one of these jail cell conversations, Frank-- who was perhaps the least superstitious member of the James family-- reluctantly told Stein about the ghost that had been haunting his brother Jesse. Stein, having once been a brilliant newspaper columnist, knew a good story when he heard one and jotted down his cellmate's story as follows:

"One night we were riding along a lonely road in Tennessee. It doesn't matter just when it was, or where. Jesse and I were riding along ahead, a little in advance of the remainder of the party. There were five or six in the party. Suddenly we came to a broad open space where two roads met and branched off in three opposite directions. We emerged from under a heavy cloud of overtopping foliage into a broad flood of moonlight. It had been very dark in the woods under the heavy trees and the bright moonlight, lying thick and golden, fairly dazzled us for a moment.

"There, standing directly in front of us, as if to dispute our passage, clearly defined in the bright moonlight, was the figure of a horseman on a white horse. We drew rein and stood for a moment stock still. The figure in the road did not move. The moonlight shone directly on his dark coat, with bright, shiny buttons of some kind, and glimmered on the silver trappings of the horse's bridle. Jesse was the first to recover himself and, with lightning-like rapidity, he drew his gun with an oath.
"'What do you want there?' he said. The figure did not more or speak. 'My God, don't shoot!' cried one of our party. 'It's a ghost.'

"Jesse's revolver went off at the same moment. The figure raised one of its hands, pointing the index finger at Jesse, while at the same time the horse turned and rider galloped off up the road. 'I have seen him before,' muttered Jesse, as he turned his horse in the other direction."

It is said that the member of the gang who warned Jesse not to shoot was Bill Ryan, a prominent figure in many of Jesse's nefarious exploits. Ryan would often to refer to the apparition, which the gang saw on several different occasions, as "Jesse's Ghost". According to both Bill Ryan and Frank James, Jesse would become furious whenever anyone asked him about the ghost.

Zerelda Mimms, who became Mrs. Jesse James in 1875, died in St. Louis in 1900 at the age of 55. In the years leading up to her death she would often talk about the phantom horseman, which the superstitious outlaw viewed as an omen. According to Mrs. James, the apearance of the apparition was seen by the gang as a premonition of bad luck.

Jesse James, Jr., who eventually became one of Kansas City's leading attorneys, spoke often of his father's encounters with the supernatural, and his version of the story is slightly different than that of Frank James.

"Dad first saw that horse in Kentucky, not Tennessee. I've heard my mother tell about it, and I've heard dad tell about it," said Jesse, Jr., when he was a teenager working for Thomas Crittenden, the governor who had signed his father's death warrant. After the outlaw was shot from behind and killed by his own bodyguard, Bob Ford, Jesse's children were adopted by the Crittendens. Jesse James had once plotted to kill Governor Crittenden, and the governor returned the favor by offering Ford a $5,000 reward for killing Jesse. As a result of this secret agreement, Bob Ford-- who had been found guilty of first-degree murder and sentenced to death by hanging for killing James, received a full pardon from Governor Crittenden.

"One night the man on the phantom horse jumped up behind dad. The ghost left his horse and jumped up on dad's. Dad was with another man riding along in Kentucky. Dad rode as hard as he could and fired his pistol behind him, but he couldn't shake the ghost off until he had gone half a mile. The thing then dropped off.

"Another time, when we was all over at Kearney, dad saw the ghost come in the yard on horseback and shot at it seven or eight times, but could not hit it."

Considering that Jesse was an expert shot who, as a young man, had fought Union soldiers as a Confederate guerilla fighter under the command of Bloody Bill Anderson and Archie Clement, it's hard to believe that he could miss a stationary target at close range with eight shots. However, it seems clear that Jesse eventually stopped trying to blast away at the phantom at some point, and resigned himself to the phantom's intermittent appearances.


It's fascinating to speculate whether or not Jesse saw his horsebound banshee on the day he was shot from behind, and equally fascinating to wonder about the spectre's mortal identity. Was the ghost rider one of the Union cavalrymen Jesse had ambushed as a young rebel bushwhacker, a victim of one of his bank shootouts, or something else entirely?