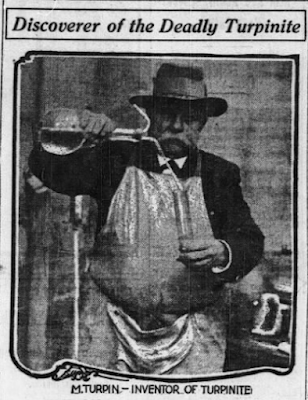 While the famous saying "all is fair in love and war" can be traced back to the 16th century English poet John Lyly, the purest expression of this sentiment came during the First World War, when belligerent nations attempted to gain a strategic advantage by any means necessary-- even if it meant using propaganda to tout the devastating effects of frightening super-weapons that did not exist.
It's easy to understand why the Allied Powers and Central Powers alike claimed to be in possession of weapons that were wholly fictitious-- it is an effective form of psychological warfare that dates back to ancient times. If you happened to be a Roman sailor during the invasion of Syracuse, for instance, few things would be as demoralizing as the prospect of spontaneous combustion at the hands of Archimedes' "death ray".

During World War I, one of the most horrible weapons imaginable was said to be in the hands of the French military-- a deadly gas known as "Turpinite". According to French, British and American newspapers, turpinite had the ability to kill the enemy so suddenly that they didn't even have a chance to collapse. Instead, they would freeze in place, with their weapons still clenched in their hands.

The first reported use of turpinite on the field of battle comes from September of 1914 during the earliest days of trench warfare on the Western Front. In August, German forces invaded Belgium and Luxembourg and pushed toward Paris. By early September the Germans had come within 45 miles of Paris, but were repulsed by French and British troops at the First Battle of the Marne (Sept. 6-12). As the German First Army and Second Army retreated, the French and British gave chase, clashing at the Aisne (Sept. 13-28) and then trading frontal assaults during a three-week period known as the "Race to the Sea". During this period, over 400 miles of trenches were dug on the Western Front.

On September 17, while the Battle of the Aisne was raging, British war correspondents on the Western Front sent reports back to London claiming that the French army, during its unexpected and seemingly miraculous victory over the Germans along the Marne, had successfully employed a new type of gun that fired artillery shells containing a substance known as turpinite, which was said to produce "instantaneous and painless death for every living thing within its reach." 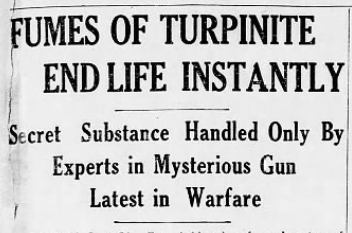 "English correspondents have reported that entire lines of German soldiers stood dead in their trenches as a result of the fumes from the mysterious turpinite discharged by the French in engagements along the Marne. The dead Germans are reported to have maintained a standing posture and retained their rifles in their hands, so sudden and unusual was the effect of the new weapon." 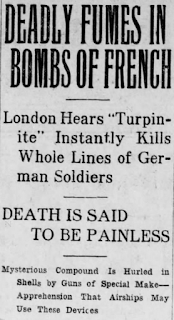 The report also claimed that turpinite was so deadly and mysterious that it could only be handled by highly-trained experts, and that the process of manufacturing it was so complex that there was no possibility that the Germans could ever duplicate it. After the Associated Press got wind of the stories circulating around London, the legend of turpinite was born. 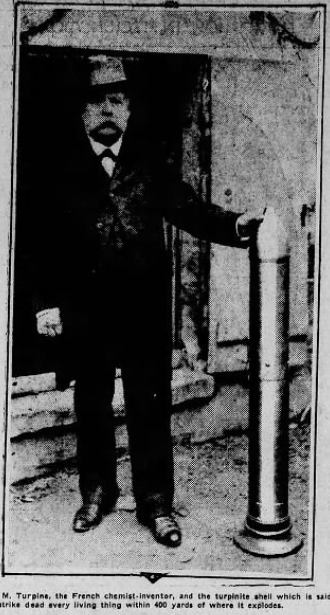 The legend of turpinite got a big boost on September 19, when Lord Beaverbrook's highly-esteemed London newspaper, The Daily Express, published a lengthy article detailing the development of France's miraculous chemical weapon.

According to this report a close friend of Lord Beaverbrook, described as being "well informed", confided to The Daily Express that the new weapon had been invented in 1912 by famed French chemist Eugène Turpin. Turpin, who had been patenting explosives since 1881, was the chemist credited for perfecting picric acid blasting charges, which were used in the Melinite and Lyddite explosives of the Second Boer War and the Russo-Japanese War. 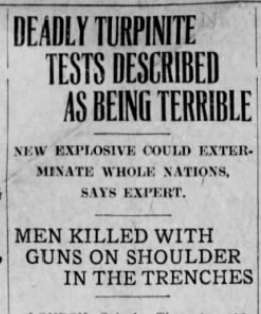 Lord Beaverbrook's "source" also claimed that he had witnessed one of the early trials of the new explosive, which was fired at an enclosure containing a dozen sheep and a handful of horses:

"From a ridge some 2,500 yards away there came a sharp, loud thud and the shrieking sound of a small shell, just as though somebody had taken a piece of silk and rapidly torn it in two. There was an explosion in the open space in the middle of the improvised sheep pen. The sheep were still huddled in the corner, one of the old horses was apparently leaning up against the railing. The one that had been munching hay lay on his side.

"When 10 minutes later I reached the pen, the sheep looked for all the world as if they had been petrified. They were mostly standing up, one against the other. Three or four were lying down, but all were dead, with their eyes open and lips hanging. It was absolutely ghastly.

"There was a faint odor in the air, which I can only describe as that given off by methylated spirit, yet mixed with a pungent smell of menthol. Later the experiments were repeated on a much larger scale at the French permanent camps at Chalons and Mailly."

Remarkably, even as the terrible tales of turpinite became more ludicrous, few Americans-- or anyone else, for that matter-- questioned the veracity of these reports, such as the following report from September 26, 1914:

Even more remarkably, chemists from all over England yawned at these reports and claimed that turpinite was old news-- they had known about it for years. One newspaper published on October 2, 1914, quoted A.A. Roberts, a man described as being a well-known English chemist:

"We have known for some time of the experiments made with it. When turpinite explodes the gases for yards around do their work as surely as though in a lethal chamber. They do not kill in the ordinary sense-- they take life away. To breath the fumes means instant death... Undoubtedly turpinite guns had much to do with the German retreat from Paris... In a first experiment a turpinite bomb was exploded in a flock of 400 sheep. The smoke cleared away. Of the 400 sheep, 400 were dead."

By this time it should have been evident to anyone with a brain that the bullshit was getting pretty deep; Lord Beaverbrook's secret source claimed that only a dozen sheep were involved in the experiment, and made no mention of smoke. Roberts, on the other hand, claimed that there were 400 dead sheep, and made no mention of the peculiar odor of menthol. Furthermore, nobody seemed to question the rather significant claim that 1,600 Germans had been killed by the French with this new chemical weapon, even though the 1899 Hague Declaration and the 1907 Hague Convention forbade the use of poison and chemical weapons.

Reports from war correspondents continued to flood London, however. An October 5 report from a Reuter's correspondent claimed: 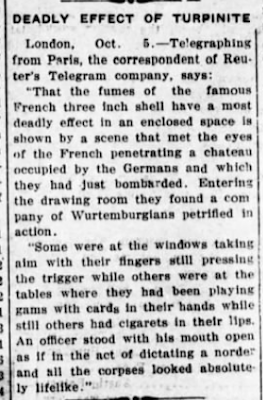 Perhaps the Germans had gotten wise to the hoax, or perhaps the claims about turpinite had gotten a little too far-fetched, but it seems that at around this time the decision was made to pull the plug  on turpinite. On October 3, French Minister of War Alexandre Millerand admitted to journalist Mary Boyle O'Reilly that turpinite was real... it just wasn't very deadly.

According to Millerand, Eugène Turpin did invent a new explosive called turpinite in 1912, which he presented to the government of France on the eve of the war. However, when it was tested on a flock of sheep, it succeeded in producing nothing more than a menthol-scented cloud. "But the sheep were quite as before," admitted Millerand, "only, perhaps, a little more gay."
fake news hoaxes military Strange History turpinite WW1