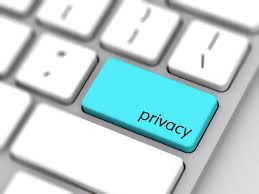 Yahoo was the first email service I have ever used and (up until today) continued to be my primary email provider. Since creating my account in 1997 I have begrudgingly consented to the occasional forced upgrade and updated terms of service, not because I wanted to, but because, like millions of Yahoo users, I had grown too complacent to be bothered with the inconvenience of creating a new email account.

With all of the recent scandals surrounding the misuse of personal data and private information by the likes of Facebook, Cambridge Analytica and others, the last thing I expected to see today, when I logged into my Yahoo account, was an updated TOS that, in essence, grants Yahoo and its host of corporate cronies more access to your personal information than you'd feel comfortable giving to your own spouse or children.

Needless to say, I will not consent to such an agreement, and since I have used Yahoo to communicate with many of you, as well as Journal of the Bizarre's sponsors and advertisers, I apologize for any inconvenience this may have. JOTB will be creating a new email account with a different email provider in the near future, and we will update the contact section of our site as soon as we are able.

I have been loyal to Yahoo from the start, even through the massive October 2017 security breach that resulted in more than 3 billion user accounts being compromised. I consider this new TOS to be even worse.

As for the new TOS, in case you haven't already familiarized yourself with it, here's what you need to know if you wish to keep your private data safe.

The new TOS is a blanket agreement that applies to all of Oath, Inc. affiliated brands. This includes AOL, Yahoo!, Verizon, Huffington Post, Flickr, Tumblr, TechCrunch, MapQuest and others. The new agreement states, in part:

How we collect and use data.

We’ve updated some of the ways we collect and analyze user data in order to deliver services, content, relevant advertising and abuse protection.

This includes: analyzing content and information when you use our services (including emails, instant messages, posts, photos, attachments, and other communications), linking your activity on other sites and apps with information we have about you, and providing anonymized and/or aggregated reports to other parties regarding user trends.

Notice how they cushion the blow... by making it sound as if this new user agreement is in your best interest! 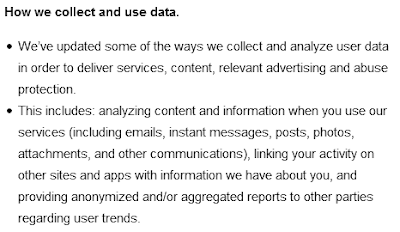 By consenting to this ridiculous agreement, you give Yahoo the right to not only "read" your email, but to view the pictures and attachments in your emails as well. Sure, the agreement says "analyze", but how the hell do you think they "analyze" your pictures? Being peeped on by a computer or a robot is no less disturbing than being peeped on by a living, breathing human being. In some ways, it may even be worse.

But there's more. The new TOS also grants Yahoo permission to share this information with Verizon. Pluse, there is now an indemnity cause, which states:

WTF? Protect you from legal action? What, you're too broke to hire a lawyer? What the hell does this even mean?

On the surface, this does not sound any better or worse than the Gmail user agreement (Google also analyzes your email, although their TOS says nothing about Google checking out your pics and attachments... or requiring you to protect them against legal actions), but the thing about Google is, well, they seem to know what they're doing when it comes to security. Unlike Yahoo, Google actually knows how to stop hackers.

It's like giving a spare house key to your boyfriend or girlfriend. Google is like the girlfriend who holds down a steady job, pays her bills on time, and adopts stray cats from shelters. Yahoo, on the other hand, is like a mentally unstable boyfriend who can't hold down a job for more than a week and hangs out with a bunch of shady-looking characters who may or may not be drug dealers. Seriously, Yahoo goes through CEOs faster than Don Trump, Jr., goes through hair gel. And, as far as security goes, I'd rather entrust my personal data to a Pony Express rider armed with a rusty blunderbuss who has to deliver the mail through hostile Indian territory.

To put it in other terms, think of your personal data as your virginity. Do you want to give your virginity to the sharp-dressed gentleman next door, or would you rather give it up to the meth-head across the street who is going to take pictures of you naked and share them with all of his scumbag buddies?

As for me, I am not eager to give anyone unfettered access to my emails, pictures and attachments, not Google, and certainly not the bumbling stooges at Yahoo. And if that means not using email or social media at all, then so be it. So maybe, in the end, if you want to get into contact with us, you'll have to do it the old-fashioned way-- by writing a letter and dropping it into the mailbox.