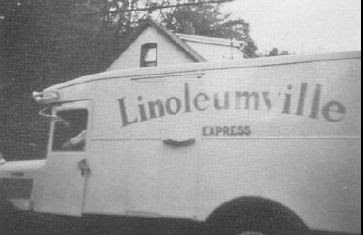 When the city of Topeka unofficially changed its name to Google for a month in 2010, it was a publicity stunt that made headlines all across the world. Though most people view this sort of affair as a cheap gimmick intended to boost retail sales or tourism, it hasn't prevented other towns and cities across America from following suit. But while the majority of these name changes are temporary, unofficial measures, there are some towns whose names reflected the influence of corporate overlords for decades.

Linoleumville, New York, is one such example.

Located on the western shore of Staten Island, the town known as Travisville was selected in 1872 to be the site of the American Linoleum Manufacturing Company factory and headquarters. As this was the nation's first linoleum factory, many jumped at the chance to get in on the ground floor of what was then a high-tech industry. Although linoleum had been invented by Frederick Walton in England in 1855, the process for its manufacture was largely experimental and unrefined, which made the quality of the product inconsistent. It wasn't until 1871 that William Parnacott developed the process that would allow manufacturers the ability to mass produce large quantities of linoleum.

But competition in the mass-produced floor covering game was stiff; in addition to linoleum there was Kamptulicon (made from powdered cork and rubber), Corticine, Congoleum and a host of other rivals. Walton, the inventor of linoleum, had been exporting his floor covering to the United States since 1869 from his factory in Staines, England. Because of Parnacott's advances in manufacturing, linoleum factories were springing up all over England and Scotland. The Scottish town of Kirkcaldy alone boasted at least six manufacturers of floor covering. All of these companies were exporting their products to the United States, so Walton decided to come to America, and thus, in 1872, the American Linoleum Manufacturing Company was born -- and the Staten Island neighborhood of Travisville was officially renamed Linoleumville.


The name could have been worse; had Elijah Galloway decided to move his cork-and-rubber plant to New York, Staten Islanders might have been stuck with Kamptuliconville. By comparison, Linoleumville sounds pretty nice.

It is unclear when the name Linoleumville first began appearing on maps and legal documents, but newspaper clippings from the era indicate that, by 1882, the place name Travisville had fallen out of favor and was seldom used. Approximately half of Linoleumville's population was employed by the American Linoleum Manufacturing Company by the early 20th century. 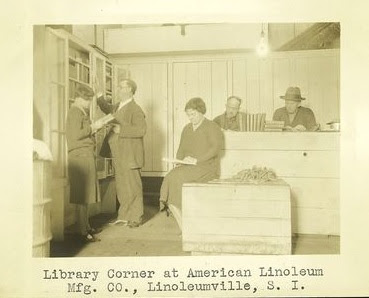 The factory closed sometime around 1930 and residents clamored for a new name, since there was no longer any linoleum being produced in Linoleumville. Contrary to what has been written elsewhere on this matter, records indicate that there was a high level of support for keeping the unique name. On November 18, 1930, the Associated Press reported from a town hall meeting that the older residents were staunchly opposed to adopting a new name:

"When the votes were counted last night, the elders were found to be solidly massed against a change while more than a hundred names were suggested by the radicals." [1]

Other proposed names included Travis, Scotstown, Long Neck, Cartaret, Melvin and Austin. However, most newspapers reported that the name Linoleumville was likely to stay, and older residents scoffed at the notion that the town's youth would have any impact on the outcome of the election, which was to be held on November 29.

When the ballots were tallied from a firehouse on Victory Boulevard that served as the voting place, it was an upset of blowout proportions. A total of 405 votes were cast, with only four cast for Linoleumville. Only one vote was cast for Long Neck, and the rest went for Travis-- the name that endures to this day.

One interesting aspect of this election of which little has been written was the grass-roots effort of the town's young "radical" element. The great name change debate of 1930 was one of the most effective get-out-the-vote efforts in American electoral history, as evidenced by the outcome. While the old-timers who favored the name Linoleumville stayed home, refusing to believe that the young "radicals" would be able to agree upon one name out of the many suggested, a group calling themselves the Travisite Whigs were pounding the pavement and drumming up support in the name of Travis.

"This is a victory of youth," declared Edward Leonard, shopkeeper and leader of the Travisite Whigs, after the votes were counted. Leonard threw a victory party at his store, where his guerilla campaign workers feasted upon "sardine sandwiches, strawberry pop and ginger ale". [2]

At the victory party Leonard gave a speech in which he claimed that the name Linoleumville had given the town's young people an inferiority complex. "Many a bashful maid has stayed at home rather than go away to school or entertainments where she would have to confess that she came from a town with such a name," he declared.

The media, however, felt differently about the matter and believed that the election might set the stage for widespread anarchy across the country at the hands of unruly youngsters. H. Allen Smith, a correspondent for the United Press, wrote on Dec. 2:

"It is obvious that the electors of Travis, nee Linoleumville, have established a dangerous precedent. The nation may well be prepared, some disgruntled observers say, to see an outburst of youthful revolt against existing town titles." [3]

The young voters of Staten Island, in reality, had not set a dangerous precedent; a similar squabble over changing the name of a town had taken place in Blair County, Pennsylvania, just two years earlier and had also attracted national attention. In 1928, state government had to step in and settle a dispute over whether or not the residents of Puzzletown had the right to change the name of their village to Marionsville, after it was revealed that the village had been named after 'Puzzle' Stiffler, a corpulent innkeeper from the early 19th century who, in spite of his short stature, weighed over 300 pounds and was said to have had a fondness for womanizing, gambling, liquor and general rowdiness. [4] Old-timers who resented the name change reacted by filling the town's "Welcome to Marionsville" signs with bullet holes. The State Geographic Board eventually ruled that the name had to be changed back to Puzzletown, on the grounds that there were already too many places named after Gen. Francis Marion and that, to the best of their knowledge, Gen. Marion had never once set foot in Pennsylvania. In that particular battle the young radicals, who preferred to live in a place named after a more suitable hero, had been defeated.

While the Linoleumville vs. Travis debacle has been largely forgotten outside of Staten Island, the incident did make its mark on popular culture for a little while. For several weeks after the November election the top joke around the country was:

Q: Why did the residents of Linoleumville change the name of their town to Travis?
A: Because they felt they had been walked on long enough.

Not exactly a side-splitter, but, then again, this was the era when folks celebrated with sardine sandwiches and ginger ale.