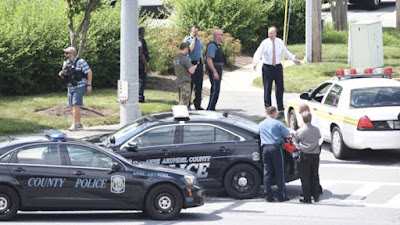 Since many important details remain to be released, it would be foolish for anyone to declare that this afternoon's shooting at the offices of the Annapolis Capital Gazette in Maryland is a false flag event, devoid of any real injuries or fatalities.

However, it is quite interesting that on June 22-- a mere six days ago-- the city of Annapolis announced several street closures as part of an active shooter drill.

Residents should be aware that real-life sights and sounds may be seen and heard along the periphery of the campus and a variety of emergency response vehicles will be in the area, authorities said.

Of course, it is worth pointing out that today's shooting occurred not at a school, but at a newspaper office 2 miles west of the site where last week's active shooter drill was held. Yet, it is is still uncanny (or perhaps fortuitous) that the Annapolis Police Department received training on handling this very same situation.

Luck? Fate? Coincidence? Or some sort of deep, dark conspiracy?

Our money is on coincidence... but still, it does make you wonder.