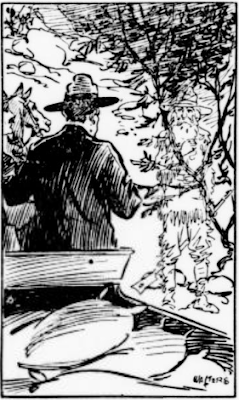 The following story comes from the March 28, 1914 edition of the Madison Journal:


Williams, Ariz.--  In Wilson Canyon, southeast of Williams, is an uncanny spot wherein horses shy and bolt from terrors heretofore invisible to the human eye. At least three wagons have been wrecked there by runaways that started without apparent cause. But at last a veritable ghost has been materialized on the unshaken testimony of two young residents of the locality, Wright Clark and "Tex" Ownby.

They say that on a recent Sunday evening about dusk they were riding down the Wilson canyon trail when their horses became frightened, snorting and prancing in terror. The boys looked to the right and saw, emerging from behind a juniper tree, the form of a man at least six feet in height, with long gray hair and beard, clad in buckskin and dragging an old-fashioned gun about as long as himself.

Boys and horses stood as though enchanted, while the apparition circled them noiselessly. The circle about complete, the figure stopped and  still without sound dropped the butt of the gun to the ground. Then it was the boys departed without delay, to pull up their foaming and trembling steeds a couple miles away and determine it had not been a dream.

Pioneer residents declare the description of the ghost exactly fits that of an old trapper named Wilson, after whom the canyon was named. Eighteen years ago one summer day he wounded a bear and chased it into the canyon. The beast turned back upon him and as he had no charge in his muzzle-loading rifle he climbed into a juniper tree, but not to safety, for the bear followed, dragged him by the foot to the ground and killed him.
Arizona