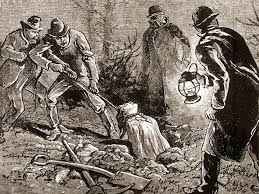 While pillaging graves may seem like a revolting idea, it was a lucrative business in the United States during the 19th century. As the medical profession began to flourish, schools required a steady supply of cadavers for dissection and anatomical study. Enter the "Resurrection Men"- professional body snatchers who provided medical schools with stolen corpses. While hundreds of resurrection men operated throughout America in the late 1800s, few were as prolific as George Marlow.

In January of 1893, an inventive journalist concocted a creative scheme in order to get an interview with Marlow by pretending to be an agent of a medical college. Never one to turn away an opportunity to do business, Marlowe spilled his secrets to the undercover reporter. He acknowledged that his best customers were the medical departments of Georgetown University, Howard University, Columbian University (which later merged with George Washington University in 1904) and the National University Medical College.

Marlow admitted that, on that very morning, he had supplied two dead women to Georgetown, one dead man to Columbus and one dead woman to Howard.

He also described his preferred method of delivery; at around 4 o'clock in the morning, he would drive his canvas-covered sleigh into the alley behind the university, where he would be met by a night watchman. After parking close to the rear entrance, he would quickly drag a corpse from the back of his sleigh and toss it into the doorway of the school before disappearing into the darkness. The whole operation took less than two minutes.


By 1894 it was evident that the bodysnatching operation was the work of not one or two men, but an organized gang of graverobbers, believed by authorities to consist of members of the Marlowe and Jones families, with George Marlowe as the ringleader.

In the spring of 1894, Officer O'Dea of the Ninth Precinct arrested George Marlow, Thomas Jones and John Newman after a failed bodysnatching attempt at Oxon Hill. As the two men were attempting to steal the corpse of an elderly woman, they were caught in the act by the sexton of the cemetery. A pistol fight then took place. Shots were fired, but no one was injured. At the ensuing trial in May, Thomas Jones  was eager to place the blame on Marlow, stating that a man named Newman paid him $2 and a quart of whiskey to steal the body, and that it was Marlow who had done the shooting. Jones received a five year sentence; George Marlow and John Newman were sentenced to six years.


George Marlow's undoing came as a result of a few stray oak leaves. At around 7 o'clock on the morning of March 3, 1896, a wooden box was examined by workers at the railroad depot of the Adams Express Company at the corner of 6th Street and Virginia Ave. SW. Inside the box, packed with oak leaves, were the bodies of two black youths.

The box had been brought to the office an hour earlier by two men in a wagon. The men were described as "two colored men, one very dark and heavy-set, and the other a bright mulatto". The darker man remained in the wagon while the other carried the box into the receiving room. The box was marked: "To L.B. Downing, Hanover, N.H."

"I want to send these goods to New Hampshire," said the mulatto to Mr. Guilford, the shipping clerk. When Guilford asked the name of the shipper, the man gave the name of Crosby and an address located at the corner of Fourteenth and Corcoran Streets. Guilford handed the man a receipt, who then hurried into the waiting wagon and sped away.

The box was loaded onto a platform by an employee, James Stepper, who observed some oak leaves protruding from the box. Stepper remembered reading about an earlier case in which cadavers stolen from Payne's Cemetery had been packed in oak leaves. When he opened the box he saw a human foot and reported the matter to his boss. A telephone message was sent to Lieutenant Vernon at the No. 4 police station and Sergeant John C. Daley and Officer Muller were dispatched to the scene. The box was taken to the morgue at the rear of the Sixth precinct stationhouse.

After interviewing workers at the express station, Vernon and Muller believed that the mulatto who brought the box into the office was either John Jones or George Marlowe. The dark black man who remained in the wagon was believed to be a man named Bowie, who also had a record as a bodysnatcher. Mr. Guilford of the express company stated that the same men had come in about three weeks earlier and had a similar box shipped to the Northwest. Police discovered that the two black corpses had not been taken from any cemetery within city limits, and one of the corpses was later identified as George Quails, who had been buried several days earlier at Woodlawn Cemetery.

Dressed in plain clothes, Sgt. Daley and Officer Muller tracked down and arrested George Marlow and his son Jeremiah at their home in Ivy City, along with John and Sylvester Jones. The Marlows and their wagon was positively identified by Guilford and Stepper. In April of 1896, John Jones and George Marlow were convicted and sentenced to two years in Albany Penitentiary. John H. Marlow- another one of George's sons- managed to escape the raid but was apprehended three years later.

The End of an Era


The breaking up the Marlow gang ushered in the end of an era for resurrection men, and the number of grave robberies throughout the country dropped precipitously by the dawning of the 20th century.
S.J. Hare, superintendent of the Forest Hill Cemetery-- one of the Marlow gang's favorite targets-- reported in the spring of 1900 that Forest Hill had not experienced a case of bodysnatching in four years. Hare had become something of an expert on the methods used by the resurrection men and how to thwart their attempts, which he described thusly:

"In digging a grave, every clod of the dirt is placed on a canvas placed beside the grave. Immediately after the interment the grave is filled up and sodded over. The earth that is in the canvas is taken away and when all is finished the grave looks like any other. You see, the canvas prevents any earth being left in the grass to mark the spot.

"During the grave robbing season-- for, strange as it may seem, grave robbing has a season which extends from August to the close of the medical schools in June-- we keep a night watchman. His first duty is to exchange all the headboards on the new graves. The ghouls are generally after some particular corpse. They don't go it blind, and this practice is about the best that can be devised to mix them up.

"The watchman carries a repeating shotgun, and his orders are to turn loose without warning on anyone who gives indication of being a grave robber... A sharp watch is kept on new graves for about two weeks. After that time the occupants are hardly available for the dissecting table."

Fear that the dearly departed might be dug up by a resurrectionist was common among grieving family members of the era. Many of them even insisted upon having cemetery workers dig into the graves of their loved ones at regular intervals to make sure that the remains of the deceased were still in the grave.

Superintendent Hare devised a rather clever way of assuaging these fears, while preventing the unnecessary disinterment of the dead. Whenever a burial was made, he would order his workers to embed a random object just a few inches below the soil. The exact location and a description of these objects were jotted down into a notebook. Whenever a family member desired to see whether or not the grave of a loved one had been disturbed, all the workers had to do was to dig up one or two shovelfuls of dirt. "A few shovelfuls of earth always reveals the article just as the book says it should be, and the lot owner goes away satisfied," said Hare.