Half-Hanged Maggie and other survivors of the gallows 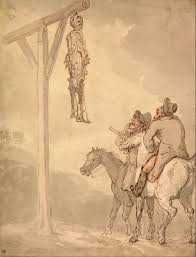 Although execution by hanging fell out of favor in the United States by the end of the 19th century, the last execution by hanging in this country took place in Delaware in 1996. But, throughout history, hanging has been the most practiced form of capital punishment around the world; and while countless convicts-- guilty and innocent alike-- have met their demise at the end of a rope, history records several interesting examples of individuals who managed to  survive this barbaric death penalty.

One of the earliest recorded cases took place in Cambridgeshire, England, in 1264 when a woman by the name of Inetta de Balsham was sentenced to death for colluding with robbers. After she was hanged, her body remained on the gibbet for three days. Yet historical records indicate that de Balsham not only survived the ordeal, but was actually pardoned by King Henry III.

Botched hangings, it seems, were commonplace in England around this time; in 1313, Matthew Enderby was hanged until he was pronounced dead, only to regain consciousness as the coffin containing his body was being lowered into the ground. A similar situation occurred in 1363, after Walter Wynkeburn was hanged at Leicester. After his body had been cut down it was transported by wagon to the Holy Sepulchre Cemetery. Wykeburn regained his senses during the trip, and later credited his revival to the rumbling and jostling of the wagon as it travelled over rough cobblestones.

One particularly strange case comes from the 17th century, when an unnamed Swiss criminal was sentenced to death on the authority of Dr. Obadiah Walker, master of University College at Oxford. According to historical records, this particular Swiss criminal had to be hanged 13 times before his life was finally extinguished. Upon examination of the body, it was discovered that some mysterious disease had caused his windpipe to become as hard as stone.

When it comes to surviving the gallows, one of the best-known cases is that of Anne Green, who was sentenced to death for infanticide. Her hanging was so remarkable that it has been cited by British legal and medical experts alike for centuries. Although there was credible evidence to exonerate her of the charges, Green was hanged in Marston, Oxfordshire, on December 14, 1650. After her body was cut down, it was trampled in order to ensure that life had been extinguished. The body was placed into a coffin and consigned to physicians for dissection. When the coffin was opened, Green appeared to be breathing, and a faint rattling could be hear emanating from her crushed throat. The doctors decided to deliver brutal blows to the chest in an effort to bring her back from the brink of death. The rough treatment worked; within 14 hours Green was conscious and able to talk.

One of the doctors present noted that the thirty minutes of hanging had not resulted in any damage to the brain, and that she had regained consciousness all at once. He wrote:

"She came to herself as if she had awakened out of a sleep, not recovering the use of her speech by slow degrees but in a manner altogether, beginning to speak where she left off on the gallows."

But Anne Green wasn't out of the woods yet: the court declared that she had to be hanged all over again. Fortunately, the doctors who had revived her rallied to her defense, and were able to convince the city's mayor to procure a pardon. She eventually moved to Steeple Barton, where she got married, raised a family, and died (of natural causes) in 1659.

Another remarkable story of hanging comes from around the same time, and involved a highwayman named Gordon. Before he was hanged, he hired a surgeon to affix a small tube through an opening cut in his windpipe. Unfortunately for the bandit, the devious plot failed. According to some sources, Gordon was so heavy that his neck was snapped as soon as the trap was sprung. But Gordon's ingenuity planted a spark in the minds of other condemned criminals; numerous convicts with strange apparatus and elaborate contrivances concealed under their clothing began to show up at the gallows in an attempt to cheat the hangman. Very few were successful.

In 1724, the hanging of Margaret Dickson at Edinburgh for the crime of infanticide aroused great interest throughout Europe. She was hanged, cut down, and placed into a coffin. Like the criminal Walter Wynkeburne six decades earlier, the rough cobblestones brought her back to consciousness as the cart carrying her coffin rumbled toward the Musselburgh graveyard. She was removed from the coffin about one-third of the way to the graveyard and prayed over by a minister, before being released. She lived for many years afterwards, had a large family, and was locally famous for selling salt on the streets of Edinburgh, having earned the nickname "Half-Hanged Maggie" on account of her ordeal. The nickname not only stuck-- it followed her to the grave, and was etched into her headstone.

Surgeons' Hall, the headquarters of the Royal College of Surgeons of Edinburgh, is Scotland's pre-eminent medical museum. The museum dates back to 1699, though the RCSE can trace its roots back to 1505, when it was established as a surgeon's craft guild by King James IV. Surgeons' Hall has seen more than a few gallows victims return to life on the dissecting table.

Murderer William Duell was hanged in Acton in 1740. He was cut down after twenty minutes and his body transported to Surgeons' Hall for dissection. He began to groan upon the table just as the dissection was about to begin. He was bled by surgeons and, by evening, was able to move about on his own power. However, the ordeal had rendered his mind a complete blank. He was conveyed back to prison, but since he had no recollection of his former life and crimes, it was decided that it wouldn't be right to hang him again.

Ewen MacDonald was hanged for murder in 1752 and his body taken to Surgeons' Hall. The operating surgeon left the dissection room for a minute, and when he returned he was surprised to find MacDonald awake and sitting up. Believing that it was his duty to complete the task of the executioner, he took a mallet and beat MacDonald over the head until life was extinguished.