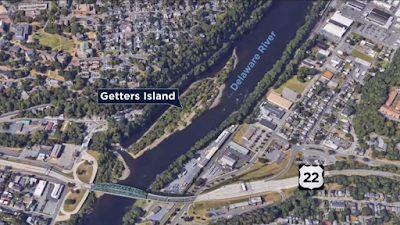 One of America's most notorious haunted islands is for sale. Getter's Island, which lies in the Delaware River near Easton, Pennsylvania, is up for grabs for $150,000. The price includes more than just six acres of heavily-wooded land, however; it also includes a gruesome backstory and possibly even a ghost or two.

The legend of Getter's Island dates back to 1833, when Charles Getter was sentenced to death for the murder of his wife, Rebecca Lawall. As one of the prosecutors stated during Getter's trial, the marriage was "a union commenced in crime, consummated in tears, and determined in blood."

According to newspaper reports from the era, Charles was forced to marry Rebecca after she filed a lawsuit claiming that he had impregnated her. The local magistrate, a name by the name of Weygandt, essentially gave Charles an ultimatum: Marry Rebecca Lawall or go to jail. He agreed to marry her, although he did so under protest.

As one can imagine, this was certainly not the foundation of a long and happy marriage. At the time of the forced union, Charles was already engaged to another woman, a seamstress from Easton named Mary Hummer, with whom he was deeply in love. In fact, the day after Charles married Rebecca, he paid a visit to an attorney and asked if it was possibly to get a divorce. After he had been informed that a divorce was not possible, he vowed that he would never live under the same roof with his new bride.

Just ten days later, the lifeless body of Rebecca Lawall was discovered not far from her home, alongside the public road. Based upon the handprints on her neck, it was evident that she had been choked to death. Suspicion immediately fell upon Getter, who claimed that he was not in Easton at the time of the murder. However, there was a witness who claimed to have seen Getter near the scene of the crime, and it was the testimony of this witness that eventually led to the jury finding Getter guilty of murder in the first degree.

On October 4, 1833, Getter was hanged on the highest part of the island while nearly 20,000 curiosity seekers watched from the riverbank. The hanging didn't exactly go smoothly-- the rope snapped during the first attempt to hang Getter. Twenty minutes later, after the rope had been replaced, Getter was hanged successfully. And it wasn't long until ghost stories began to circulate about Getter's Island.

But the legend of Getter's Island took a bizarre turn in September of 1915 with the mysterious death of a boater named Floyd Bossard, who disappeared when his canoe capsized in the rapids alongside the haunted island. While his companions escaped without injury, Bossard was swept away by the current. According to the Harrisburg Telegraph, when Bossard's body was discovered several days later, about eight miles south of the island, there was a rope found around the victim's neck. Stranger still, Bossard's companions swore that there was no no rope in the canoe.

Yet the death of Floyd Bossard was not the first tragedy to take place at Getter's Island after the hanging of Charles Getter.

On March 6, 1860, the steamboat Alfred Thomas exploded at Getter's Island. For some unknown reason, just as the boat was approaching the island, the steam ran low and the crew was forced stop. When the gauge indicated the proper amount of pressure, the boat pulled away from the island and the boiler immediately exploded. Of the 34 passengers and crew, twelve were killed and another twelve were severely injured.

If you are interested in purchasing this haunted island, you can view the owner's listing on Trulia.
ghosts haunted places Pennsylvania Strange News