There's something spooky about white cats 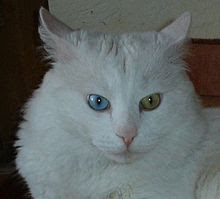 A few weeks ago, while 'talking shop' with a fellow paranormal enthusiast, I casually mentioned that white cats have played a strange premonitory role in my life.

The first unusual encounter I had with a white cat occurred when I was in junior high. In order to get in shape for the upcoming football season, I had gotten into the habit of going out for a run every night, usually after midnight. One hot August night, as my footsteps echoed through the rain-dampened alleys and backstreets, just as I rounded the corner of my block and sprinted toward home a large white cat darted out from behind a trash can and dashed across the alley into an abandoned garage, nearly entangling itself with my feet. Although the unexpected incident scared the crap out of me at the time, I gave the matter little thought until the following morning, when my parents informed me that my ailing grandmother had passed away the previous evening in a local nursing home.

Of course, the death of my maternal grandmother and the appearance of the white cat didn't appear to have any connection at the time, other than the fact that it was an unsual occurrence. However, the same exact thing happened again two years later-- another white cat crossed my path during a late night jog in November, at approximately the same time my paternal grandfather died in a local hospital after a bout with a lengthy illness. It was not the same cat (at least I don't think it was), and this strange encounter took place on a different street in a different part of town. But the end result was the same.

Amazingly, this would not be the last time that the appearance of a white cat presaged the death of a family member.

Just a few years ago-- almost two decades after my first encounter-- I had driven up from Harrisburg to visit my paternal grandmother, who was my last surviving grandparent. Halfway home from the hour-long trip, while driving on a two-lane highway through a tiny coal mining town, a had to jam on the brakes to avoid hitting a white cat that had dashed in front of my vehicle. This time it was broad daylight, and I was able to get a good look at the feline jaywalker. It had long fur and odd, piercing eyes. It stopped in the middle of the roadway and glared at me before sprinting away, and I noticed that one of the animal's eyes was a striking, radiant green and the other was a calm, serene blue. I still have a distinct mental image of the cat, and based upon my recollections and research, I would venture a guess that the cat was a Turkish Angora.

Although my grandmother did not pass away on that particular day, she fell ill and was taken to the hospital a few days later, where she eventually passed away from complications from pneumonia. Her death occurred four or five days after I had seen the cat, but it was close enough to suggest that there might be some supernatural element at play.

When I told this story to my friend, he said that he seemed to recall hearing about similar experiences with white cats, and he sent me a link to a story about a bizarre incident that took place in Trenton, New Jersey, in 1921, which I have included below:

I'd be curious to find out of anyone else has had spooky, supernatural encounters involving white cats. If you have, contact us and let us know!
cats paranormal premonitions