The Incredible Tale of the Strahl Family Curse


In February of 1928 the wife of Dr. Samuel Oliver Netherton, a prominent physician from Kansas, was found dead in the basement of their home on a farm outside of Olathe. Death was instantaneous; she had been shot in the back of the skull at point blank range.

Suspicion, naturally, fell upon the dead woman's husband. This sent shock waves throughout the community, however, as Dr. Netherton was the last person anyone would ever suspect of carrying out such a foul deed. A graduate of prestigious Johns Hopkins University, Dr. Netherton was able to retire at an early age after accumulating substantial wealth, and had devoted his leisure time to world travel.

Mrs. Edith Netherton, who was born into the equally prosperous Stahl family, possessed property worth $100,000. The Nethertons, however, lived frugally, and few people around Olathe were aware of the couples' wealth. When it came to money, the Nethertons only splurged when it came to Dorothy-- their beloved nine-year-old daughter.


Although the murder weapon was never found and Dr. Netherton insisted he had been out of town the day of the murder, he was convicted on circumstantial evidence and sentenced to life in prison. As to the identity of Edith's killer, Dr. Netherton believed that someone sinister-- from this world or the spirit world-- had been stalking his wife's family for decades, inexplicably killing members of the Stahl family one member at a time.

It was a strange explanation, especially from a refined gentleman trained in one of the world's leading medical schools, but Dr. Netherton insisted that a mysterious curse was to blame. He appealed his conviction on those very grounds, albeit unsuccessfully, insisting that the Strahl family murders had originated long before he ever met his wife.

The killings began in Deadwood, South Dakota, in 1882 when a frontier trapper named Dode Strahl was shot to death. He was a nephew of Edith Netherton's mother. His killer was never apprehended.
Next came the murder of Dode's brother, Roll Strahl, just a few years later. He was found shot to death in the back of a wagon on a farm near Exira, Iowa. The very same year, Colbert Strahl-- the father of Dode and Roll-- was shot to death on his horse while riding near Exira. No arrests were ever made.

Then, in 1916, Arthur Strahl was shot to death in Chicago. Arthur was a first cousin of Dr. Netherton's wife. Four years later, Paxton Muir was found murdered in a Los Angeles hotel. Paxton was a second cousin of Edith Netherton. His killer was never caught.

From 1882 to 1928, six members of the Strahl family were murdered in five different states. And the only one arrested was a kindly, well-liked retired physician and doting father and husband. The other murders remained unsolved.

Dr. Netherton, with all the time in the world to kill inside a lonely prison cell in Kansas, began to wonder... Had a lone serial killer been stalking the Strahl family for thirty-five years, hellbent on revenge for some long forgotten transgression? Was it mere coincidence, as uncanny as it may seem? Was there a strange cult or a secret society determined to wipe out the Strahl clan? Or was it a divine curse of some sorts, a punishment doled out by an angry deity for the crimes of an ancient forefather?
He began to fear for the safety of his young daughter, Dorothy. Would she be next?

Then, in 1936, there came a glimmer of hope for Dr. Netherton. A convicted robber serving time at a state prison in Missouri made an outrageous claim-- that he had been the one who murdered Edith nearly a decade earlier. And he still had the murder weapon as proof.

Charles Bunch, serving a 25-year sentence for armed robbery, confessed to killing Mrs. Netherton to Warden J.M. Sanders in Jefferson City. The warden, however, did not believe the story. "Bunch's confession makes things confusing," stated the warden. "He gives the wrong date for the crime, and says Mrs. Netherton fell near a furnace. The furnace was in a far part of the basement from where she fell."

Perhaps Bunch just got his facts mixed up. After all, almost a decade had elapsed since the murder in Olathe, Kansas. And Dr. Netherton pointed out that there was a galvanized tank near the spot where she died, and it was possible that Bunch had mistaken it for a furnace.

Although they were skeptical, Kansas authorities agreed to re-examine the case, but eventually ruled that Bunch was not the killer. Dr. Netherton's life sentence would not be overturned, and the parole board denied clemency appeals filed on his behalf in nine consecutive years. It looked as if Netherton would die in prison.

Finally, in June of 1949, Stanley Oliver Netherton-- now 81 years of age-- was released from prison after another inmate, Vincent Williamson, confessed to the crime. 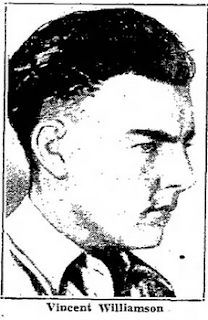 Williamson provided accurate details about the 1928 slaying that were so minor and unknown to the public that authorities had no choice but to release the now-elderly former surgeon, who had attained a small measure of fame as the oldest prisoner in the state of Kansas. Williamson, who was a tramp at the time of the murder, claimed that he shot Edith after she refused to give him food.

Netherton passed away in October of 1958 at the age of 91. His final request was to be buried alongside his wife. As for their daughter, Dorothy, no is quite sure whether or not she was spared from the Strahl family curse. In 1931 she was adopted by family friends. She changed her name, married, moved away, and was never seen or heard from again.